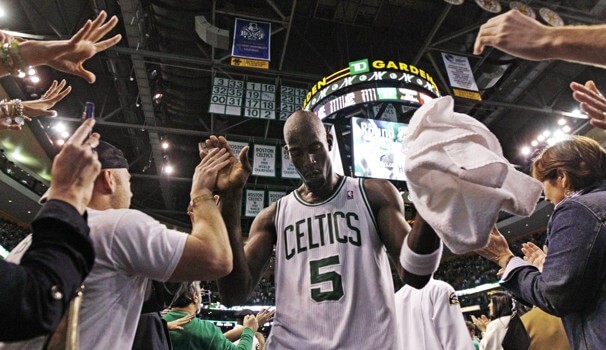 There’s something about having a favorite player in any sport that makes you tune in even more than you already do. The investment you put in is beyond the comprehension of someone who doesn’t watch sports, and it’s really only appreciated by a fan who is as hardcore as you are about the game. For instance, in the case of Ed, no one can tell him anything about Russell Westbrook (and that’s not even his favorite player; merely one of his favorites). However, Ed feels a personal connection to the way Westbrook approaches the game, plays the game, wears his emotions on his sleeve, and the last thing Ed will do is not go to bat for him. When Westbrook needs to be reined in, simply from the writer standpoint, Ed can do that as well, but it’s always with the best intentions in mind. You never have to doubt the man’s sincerity.

When it comes to Kevin Garnett, that’s how I feel. The man is, literally, my favorite player in all of basketball today, and there really isn’t a close second. As much admiration as I have for the games of current players such as Dirk Nowitzki, LeBron James, Zach Randolph, Deron Williams and several others, none of those guys bring the mixture of admiration, appreciation and adulation that KG has brought since he stepped in the league in 1995. Outside of Allen Iverson, there’s not another player who has helped shape the way I view today’s game (well, there’s Michael Jordan, but I don’t count him, because he is God).

With that said, watching KG play the past several seasons has been a challenge. We know fans, as well-meaning as we are, tend to have revisionist history. Some people began to look at KG through a lens that troubled me. It seemed to stem more from what they were reading and being influenced by as opposed to what they, themselves, were actually witnessing. Sure, there were signs of wear and tear and even I mentioned that during the ETSF days, but it wasn’t rooted in some of the sacrilege that people were saying.

To watch Kevin Garnett play basketball is to see someone who is more passionate about playing the game than anyone I’ve ever seen do any kind of job, labor, skill or trade. Seriously, and this is only me talking: There may be other people who are better at what they do, in their respective industries, but there is no one I’ve seen who is more passionate about what they do, in their industry, as Kevin Garnett is when it comes to professional basketball. He's also one of the most intelligent players the league has ever known. To watch him on offense and, especially on defense, is a sight to see. He knows when to be patient and when to be aggressive. Not too many players have that trait. That's what basketball IQ is all about.

Why do you think the man gets so animated, so matter-of-fact, so defiant when people call him over-the-hill? Why do you think he clapped back at the owner of the Atlanta Hawks, a man who’s successful in his field, for talking out of line? Why do you think he plays with the desperation of a man who is still trying to prove himself, almost as if he’s playing for his first big contract, despite the fact that he’s made well over $150 million playing basketball? It’s because the passion, the drive, the determination to make the most of his opportunities burns within him more than any tangible reward one can offer.

Last year, this time last year, I saw that same fire burn within the superstar who is the reigning NBA Finals MVP, The Great Dirk. It’s as if something took over him and he went to a level that plenty of fans didn’t know he had, yet he knew was there, and he played as if it would disappear if he didn’t seize it right that moment. The numbers weren’t so much different as postseason’s past; rather, it was the mindset, the outer appearance, the things that fans who have watched the game for years, fans who invest time, money, feelings, passion and emotion into. We knew it when it came to the surface, and it was an honor to see, especially because it’s as if it hit him that this opportunity would never come again.

This postseason, that player is Kevin Garnett. This postseason, he’s playing like a man who realizes this opportunity will NEVER come again; not that it MIGHT NOT come again, not that it MAY NOT come again, but that it will NEVER come again. With this season being as wacky as it has been, my only hope is that the stench of bad luck, (aka, injuries) does not befall his team to the point of no return. As a fan, I can handle watching a team, or my favorite player, lose four times in a postseason when it’s on the up-and-up (aka, no untimely injuries, suspensions, etc). Hell, as a fan of sports, you better be able to handle that.

However, for someone we know is a part of a team who is definitely on their last leg, the hope is this last leg is a triumphant one for the man who is, without a doubt, one of the greatest to ever step on the hardwood floor, and who knows: maybe the wise words of The Greatest Winner in the History of the NBA will finally come to pass, as this interview from years ago suggests.

10 Replies to “The Last Of A Dying Breed: Kevin Garnett”