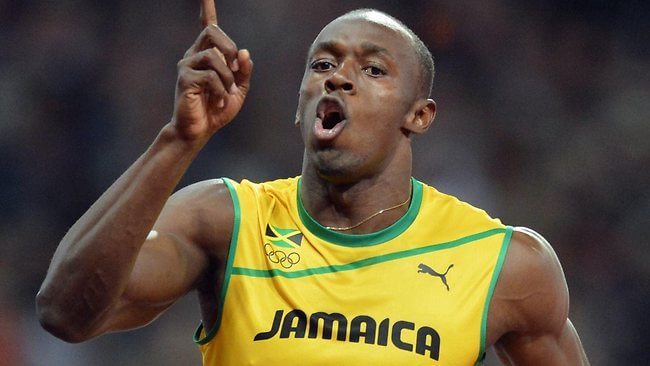 It’s rare that an athlete can captivate the attention of the sports public in the span of one week. Well, to be technical about it, I’ve never known of an athlete that was able to capture the imagination of sports fans over the course of six days. In six days, the coolest of 2012 won his three main events that he set out to conquer.

Not only did he conquer, he repeated what he did four years earlier. He did so in a way that was equally fascinating to watch. On top of THAT, he wears Puma, which is a brand I barely look twice at, but he’s so damn cool that he’s actually got me thinking about rocking some. To take it a step further, dude had me, an American, wildly cheering him on even though he was representing another country. I didn’t give a single damn either. Oh, and Tinsley also did his part to remind us that the coolest is a gangster and a gentleman, which was evidenced by halting an interview to pay homage to Sanya Richards-Ross having the national anthem played after she won gold. Those reasons are why Usain Bolt is a legend, an icon, and the absolute coolest of the year.

In terms of a single athlete performing a single task, I have never seen anyone do it as cool as Bolt. During the Olympics, Bolt knew the world was watching. Therefore, we, as fans, were treated to the ultimate Bolt experience. Cameras followed him around well before his races, and we got to see a side of Bolt that others around him knew, but others who aren’t so fortunate did not. Whether it was giving dap to the help before settling in the blocks or bullshitting with U.S. sprinter Wallace Spearmon in the back, Bolt was as loose as anyone I had ever seen that had the weight of the sports world on his shoulders.

He would pace around on the track, but it never seemed because he was nervous. It seemed to be just for the hell of it. Sometimes, he would yell, and other times, he would pose for the crowd. The only thing that could have made it cooler was to have Michael Buffer do Bolt’s introduction for each race. Imagine that: Fans already know how awesome Buffer is (boxing, to me, is his specialty). Listen to him introduce Floyd, Pacquiao, Tito Trinidad (back in the day), and picture how cool it would be for him to do Bolt’s (this needs to happen in 2016 in Brazil).

Anyway, the man came out for the 100 and destroyed everyone, breaking the Olympic record in the process. He danced, did his jig and pretty much set the tone that he was in London to entertain and to dominate. He did the same in the 200 and capped it off in the 4 X 100 relay, doing his part to help break that world record as well. It was amazing to see. Oh, and let’s not forget that Bolt was the target of criticism from Carl Lewis, which helped spark this memorable tirade from Justin Tinsley on The UC Show immediately after the Olympics.

Another thing to remember is the Olympics were delayed. With the time difference being a factor, watching events live was very much a challenge, but when it came to Bolt, I found out when he would run and literally built my days around making sure I saw his races live. See, when it comes to the rare greatness and cool that is Usain Bolt, there’s nothing like seeing his feats in real time. It becomes a task when Twitter, a medium that is built for people to tweet stuff immediately, gave results of what happened in London well before I could see it on my TV. Ideally, the best thing to do in that situation was to log off Facebook and Twitter. So I did.

That’s right. Usain Bolt held my sports-watching experience hostage and basically dictated how I would view activities for the day, and to make sure nothing would be compromised, I stayed away from social media. To make that even more remarkable, it isn’t like sitting around all day to watch 2 ½ hours of activity as is the case for a basketball game or 3+ hours for football or baseball. For Bolt’s 100-meter final, he ran in 9.63. In the 200, it was 19.32. In the 4 X 1, it was 36.84. So Usain Bolt held my sports-watching days hostage when, in actuality, his events lasted for a shade over one minute.

After the races were over, HE took pictures. Sure, people took his picture, but he commandeered a high-priced, high-quality camera from some random cameraman and started taking pictures of whatever was in front of him. Who does stuff like that? The only one who does is someone who is beyond confident in his abilities to perform and entertain. In 2012, Usain St. Leo Bolt did just that, and he did it better than anyone.