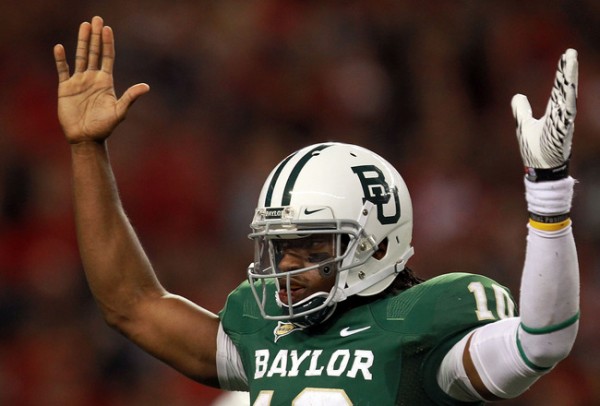 See, there's a reason to me giving him this name and my attempt to make sure I refer to him as said name for the rest of my life.  To this day, I refer to Charles Woodson as The Heisman for not only winning the Heisman trophy in his last year of college, but for doing it by taking it from a man who may as well have had his name written on the trophy at the beginning of the season in Peyton Manning.

Well, Heisman Jr. did the same this season. Coming into the year, the Heisman was Andrew Luck’s to lose, not to win. See, the Heisman trophy may as well have had his name on it already, and the Heisman folks may as well have flown his family to the Downtown Athletic Club and thrown a few finalists next to Luck in the front row, simply for photo opportunities and to make it look semi-presentable.

However, there was a movement brewing in Waco, Texas. A man, highly recruited out of Copperas Cove High School, was making his mark on the campus of Baylor University. Recently, Baylor was known, athletically, for their basketball team’s recent run a couple of years before during the NCAA Tournament. Besides that, unless you’re from Waco, or an alum or live in Texas (which, even if you know enough people, even that didn’t matter), you didn’t give a damn about Baylor. All of that was about to change.

Griffin led his team to a victory over TCU in the first game of the season and did so in amazing and must-see fashion. All of a sudden, Griffin, already a good quarterback to the folks down here and an emerging one to the masses, went from Robert Griffin III to RG3. At the time, I thought it was funny and I also thought it was maddening. I remember talking to Ed and telling him how it might be selfish of me, but I wanted Griffin to remain an unknown; someone that fans like us, fans who have followed him since high school, know about and appreciate, not someone who folks would fall in love with, only to tear him down when/if adversity came the team's way.

I wasn’t crazy about seeing people package him up and attempt to make him into something to talk about, instead of someONE to talk about. Crazy Joe echoed similar concerns, as he followed Griffin from his spot in North Carolina. Michael Tillery called Griffin winning the Heisman well before it was fashionable, even with the love-fest folks had with Luck. However, we knew Griffin’s story; the impending greatness, the recovery from a torn ACL and we all said that this just may end well after all. The country would learn about Griffin, even if it came at the creation of RG3.

Well, RG3 continued to dazzle, got people talking about him, his team, coach Art Briles and the entire program at Baylor. The Heisman was still Luck’s to lose, but he had legitimate competition now. He had someone on his heels with a wonderful story, the skills and the success to match. Griffin was the real deal. This much was obvious to people in Texas, as well as people who had been paying him attention before-hand. Now the rest of the country was seeing what we already knew.

Oklahoma. Texas Tech. Texas. Countless others fell victim to the movement that was RG3. The man was on a tear and the movement reached levels and heights where people really started to believe he and Baylor could bring the Heisman to Waco. Then, on December 10, it happened…

There’s so much more to this story that needs to be told and will be told. For the moment, Robert Griffin III, aka Heisman Jr., is one of the coolest people walking the face of the earth and easily one of the five coolest of 2011.