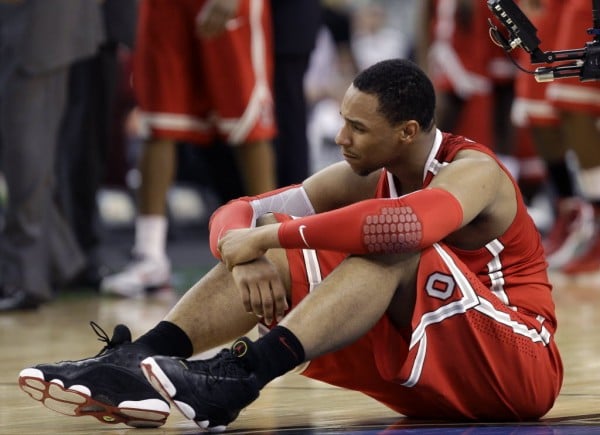 The 2011-12 college basketball season is nearly in the books.  For four players in particular, four who were sure-fire lottery picks in last year’s Draft and decided to come back and play their sophomore years, all four of them have not improved to the point where a fan who is invested in the NBA game thinks they will be a quality player on the next level.

So how exactly did this happen?

Each player’s journey has been different.  Some have taken back seats to younger players.  Others remained the focal point of their team, but just didn’t get it done.  In another case, one player just isn’t that good, while the fourth, while making good on his vow to make it to the Final Four, hurt his stock so much that we now wonder how good he really is.

For the record, I rarely knock a player for coming back, but, admittedly, that’s the college basketball fan in me.  It's hypocrisy at its finest, which I'm guilty of.  When players return, the college game improves, and I love college basketball.  With that said, is a player returning for his second year necessarily what’s best for the kid and his future?  That’s up for him and his family to decide.  However, I’ll admit my hypocrisy and say I like it when they return, because the college game ends up better for it, even if the individual players, themselves, don’t.

Terrence Jones is an explosive basketball player, one of the keys to Kentucky’s run to the National Championship.  He could’ve dipped last year and got first-year money in the NBA, but he decided to come back.  This year, Jones has been solid, but overshadowed not only by Anthony Davis, but also by Michael Kidd-Gilchrist (I'm only limiting this to UK's front-line).  Jones does things on the court that remind you he has the ability to be a monster, but there are also times when I literally forget he's even out there.  It sucks, because his heart is in the right place and he has a great chance to be a part of bringing the Wildcats back to championship prominence.  Plus, I'm a fan of him and truly think he's a good player. For all the good he did by returning, it just may come at the expense of some nice bread at the next level.

Perry Jones and Harrison Barnes….lord, have mercy.  Have two players been pegged as disappointments this season any more than these cats?  In fairness, it really depends on what people were expecting from them.  Perry Jones has a cool game and all, but when people were saying he was the number one pick coming out, it was one of the wildest things I had ever heard my whole damn life.

For someone who watched him in high school and his first year at Baylor, I have no idea what the hell NBA scouts were seeing.  It was almost obvious that, from a pure “Get your paper” standpoint, he should have left last year.  Staying in college would only expose the flaws that people who have seen him over the years knew about.  Once again, though, he decided to stay, and the nation saw what some of his already knew: He just aint that good.

As for Harrison Barnes, admittedly, that’s more for others to tell.  The narratives I’ve read and seen of Harrison Barnes and his brand, as far back as high school, are tales I didn’t care, and still don't care, to know about.  Besides, there are people who are way more qualified to preach The Harrison Barnes Gospel than me.  Anyway, he hasn’t lived up to his billing, and at this point, I don’t know what to say about the young man.  Can he improve anymore in college?  Obviously, it’s irrelevant, because he already declared for the draft.  With that said, he goes from a player who was a potential top-three pick to someone who’s more than likely out of the lottery.

As for Jared Sullinger?  Just pray for that brother.

In the words of Bomani during the Ohio State/Kansas game, Sullinger was out there setting money on fire. He had a good year, but he didn't have the year people expected him to have, considering where he was, as a player, last season.  He was exposed to the entire country on Saturday, and while he was able to reach one of his pre-season goals by helping Ohio State return to the Final Four, he played like crap when he got there.

The point is simple:  If a college basketball player's goal is to play in the NBA, and they are a consensus lottery pick, then it's time to go, period.  When you can get money, go get it.  There’s no shame in being overpaid at your job.  Are some of these first-year cats who have already declared this season actually ready to go play against grown men? Hell no, but they've been labeled as lotto picks, so they're gonna bounce and figure the rest of it out while that NBA check is hitting their direct deposit every two weeks.

Hell, I’d love to be overpaid working at my job, and one day, I will be.  It won’t matter if you think I’m ready or if I even think I’m ready.  If someone is crazy enough to offer me a ridiculous amount of bread to do something I love, I’m gonna dip from where I’m at.  When it comes to the first-year player who has the opportunity to leave and get that money, they should do the same thing.