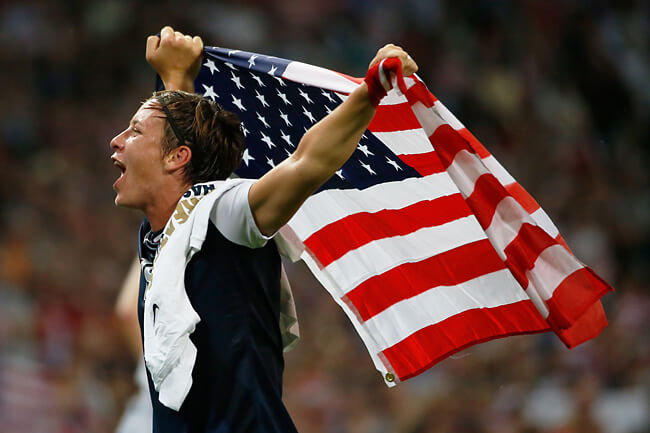 True story: Prior to this past summer, my only memory of Wembley Stadium was SummerSlam 1992 when the main event was The British Bulldog against Bret Hart for the WWF Intercontinental Championship in front of 80,355 people or something crazy like that. Lennox Lewis came down the aisle for the main event waving the flag, and it made for an absolutely memorable scene. Anyway, the gold medal match between the U.S. and Japan was just as big. There were over 80,000 in attendance to watch the final, which made it the biggest crowd ever to watch a women’s soccer match. To me, that’s cool as hell.

The U.S. Women’s National Team has a variety of players who each brought their own element to the team and their crossover appeal. Hope Solo is their all-world goalkeeper who is unafraid to speak her mind. Megan Rapinoe, my favorite player on the team, plays with an unmistakable flair and randomly provides Allen Iverson quotes, which automatically makes her amazing in my book. Alex Morgan made the game-winning goal against Canada in the semifinals of the 2012 Olympics, and Carli Lloyd scored two goals in the gold medal match against Japan. These four will be remembered for these reasons by me, and many other reasons, for other fans as well. However, the face of the team, and their catalyst, to me, is none other than Abby Wambach.

From an on-the-field standpoint, Wambach’s presence is undeniable. She scored five goals in six matches during the Olympics and provided the consistent and steady force that any team must have to succeed. Plus, her impact on the field can be seen just by the way soccer has been viewed over the past couple of years. This was the only time I can think of when folks that I knew, my peers, made it a priority to tune in and watch the soccer.

Notice I did not make a distinction between the men’s or women’s game. My peers and I were genuinely intrigued to watch, and at the forefront of that movement was Wambach. And while that can be attributed to the fact that it was the Olympics, the back story of the two teams for the gold medal match certainly contributed to the intrigue as well. She could have made this list last year had her team finished their ultimate goal. However, she was able to use her team's shortcoming as fuel to rebound this year and win the gold medal and did it against the team that kept them from winning the 2011 World Cup.

In 2008, a broken leg kept her from being a part of the women’s national team in Beijing. In 2011, an extremely competitive Japan team kept her team from winning the World Cup. In 2012, nothing stopped the U.S. women’s national team from reaching their goal, and at the forefront of that was Abby Wambach. In Texas, we refer to that as being “what that is.” It’s only fitting that her story of redemption and her impact on the game of soccer has her as one of the Five Coolest in 2012.