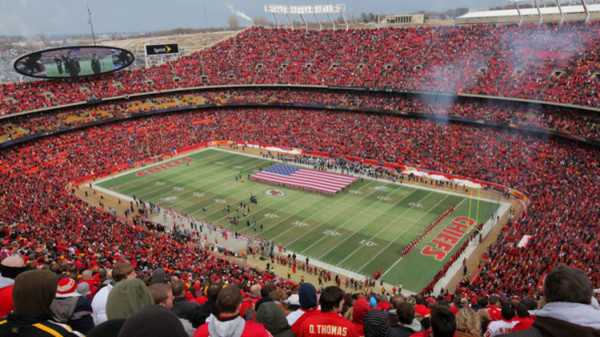 Football season is the best time of the year to be a sports fan, and the biggest reason is because it’s the best time to shock the world. However, this version of the Shock the World Tour got off to a tricky start. The plan was to get to Kansas City at 8:30 in the morning, but I missed my flight by a couple of minutes. For some reason, I thought my flight left at 7:30 instead of 7:05 (the actual time), so when I walked up to the gate at 7:07, the plane was rolling down the runway and I was standing there looking like an idiot. I shot a text to Crazy Joe, who was at the airport in North Carolina, and when I told him what transpired, all he could do was laugh. All that said, getting to Kansas City didn’t get too complicated as I was able to get on the next flight and landed there at 11:30 in the morning.

Once things were settled in Kansas City, it was off to find some food. See, that’s the thing about being a fan when the trip is sports-related. The biggest priority is the game. The second, immediately after that, is finding the best food in the city. Since everyone I know from Kansas City insists on BBQ, that was the mission, and we found it in Gates BBQ. The food was off-the-chain, and the portions were so damn big that I didn’t even need to eat again until much later in the evening, despite my first meal of the day being around 1 in the afternoon or so.

The remainder of the afternoon was pretty predictable. The Alabama/Texas A&M game took up the entire afternoon and, in my opinion, lived up to all the hype. There’s no desire to break it down here, since people either watched the game itself or can find recaps anywhere. There wasn’t much else happening on Saturday afternoon, so that meant getting some rest and finding somewhere to tune in for the Mayweather fight later that night … and that is where things got tricky yet again.

Oh, before the fight, I finally decided to part with my Blackberry. Now for the people who don’t know me well, they may be compelled to say, “Okay, you got a new phone. So what?” However, anyone who knows me knows that I LOVE Blackberry, have had at least three Blackberry phones in the past five years and have stood by them like a jilted and broken person stands by his or her lover whose best days were long, long behind. My connection to Blackberry phones is that real, that foolish and that authentic. However, after my phone died on me in one hour on Friday night and died on me again on Saturday (after I intentionally kept it powered off on my initial and connecting flights), along with the random shut-offs, being unable to charge unless it’s laying at an awkward angle on my bed at the house or my desk at work, the proverbial writing was on the wall. B-Lew, after seeing my tweet saying I was about to finally cash in on my upgrade from last April, chimed in as well. Crazy Joe did some research and helped me pick one, because if he hadn’t, I would have continued to put getting a new one off. After the Tide/Aggie game, we got in the Phantom (okay, it was really a Charger) and made the short drive to Best Buy to bury my Blackberry and join the Galaxy family. It was a bittersweet, but very, very necessary, move to make. Anyway, back to the Mayweather fight, aka May-Per-View.

The plan was to go to Buffalo Wild Wings to eat wings, shoot the breeze with folks in the building and watch the fight, but once we got to the first location, we were turned away due to the building being at capacity. At this point, it was damn near 9 p.m., so we had to think fast. We found another Wild Wings about 20 minutes away, and while we were able to get in, we had to stand the entire time because the building was full as well. Nonetheless, that’s what we did, and the night went without any further incident.

Sunday morning was the main event, the day that made this event come together. It was billed on last Tuesday’s edition The UC Show as “Somebody’s O Gotta Go,” which is true because both teams were undefeated, but it was somewhat ridiculous since both teams only played one game. It was also the chance to see Dez Bryant do work in person for the first time since I proclaimed him as my favorite Dallas Cowboy of all time last December. I knew Arrowhead Stadium was going to be loud, but after being in there, I can say it is the loudest stadium I have ever visited, and sitting only nine rows up from the field made the experience even better. I could barely hear a word Crazy Joe said, and he was right next to me. There were four Cow fans right behind us and we couldn’t hear each other, so we all settled for high-fives anytime the Cows did something well on the field. The Chiefs fans were all awesome, and there was never a time when I felt any hostility — no fighting, anything resembling the making of one in the midst or anything like that whatsoever.

It was truly an awesome experience, and even though the Cows lost, it was still something I enjoyed being a part of. There were a lot of fans who wore jerseys of players who don’t play for their teams anymore, which STILL gets on my nerves and is something I have brought up in the past. I understand the tactic, but it’s still stupid. The only regret was not tailgating, but with the traffic coming into the stadium being so damn thick, it was damn near impossible to engage in any tailgating activities. It sucks because it truly does comprise such an integral part of the Shock the World experience. All in all, the trip was fun, and it was even more fun to simply sit back and enjoy being a fan and getting another reminder of how carefree it is to be just that: a fan and nothing more.