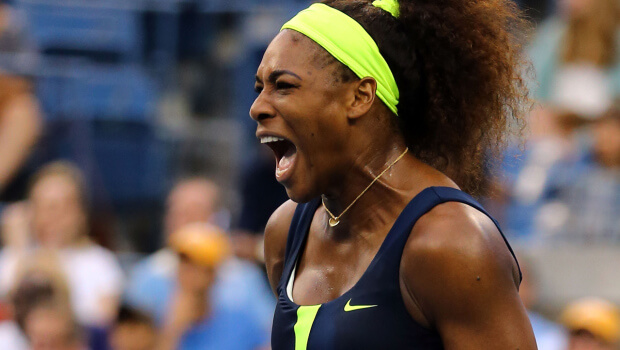 The time to have the discussion is here. It is a discussion that people have when they witness a streak of greatness that is so dominant that it would be an injustice not to have. Serena Williams is off-the-chain, she is amazing, in a league of her own and is putting together a title run that I’ll be telling my nephew about very soon, even though he won’t know what I’m talking about.

Yesterday, Serena Williams added to her memorable 2012 run with a victory in the US Open Championship, by holding off top-ranked Victoria Azarenka. The true measure of a champion comes not just when they destroy the competition, as Serena did during the Olympics when she played with a ferocity that suggested that no one had any business being on the same court with her, whatsoever. No, that would be too simplistic.

The true measure of a champion is to have your back against the ropes with a more-than-worthy opponent down your throat and attempting to seize the moment. However, being a champion requires being able to dig a little deeper, demands that one push themselves just a little more and when the opportunity strikes, grabbing it by the throat and refusing to let go.

Serena did just that yesterday. Victoria Azarenka isn’t the number-one ranked player just for the hell of it. Azarenka won the Australia Open earlier this year, which means she is no stranger to the bright lights and Serena, admittedly, didn’t think she had much of a chance to win. However, she did just that and is putting the finishing touches on one of the most dominating runs in sports history, let alone tennis history.

Where does Serena rank in the Mount Rushmore of athletes today? Damn relegating it to gender, which would be an injustice to people who know better. She is incredible, and it is an absolute privilege to see a master of their sport do their thing. We’ve seen Joe Montana master the quarterback position, Jerry Rice master the wide receiver position and Michael Jordan master the game of basketball. When it comes to tennis, we’re seeing Serena master the outdoor game with a resilience and dominance that is reserved for once-in-a-generation performers. Take heed, take in the moment and make sure to appreciate what she is doing.