This morning was supposed to be like every other morning. I slept in a little bit, and the plan was to get up, go for a run at the park, and get ready for my Dallas Cowboys to continue their miraculous run through the 2014 season. Once I woke up and saw it was 36 degrees outside, I rolled back over and turned the TV on instead. The TV immediately came on, to ESPN of course, to news that Stuart Scott passed away at 49 years old to cancer. This morning was the realization that Stuart Scott played as big a role in my shaping as a sports fan as the athletes he covered.

My first memories of Stu were as a teenager watching ESPN. It was the first time I ever saw someone like him on television and when he said things like someone having their Ph.D., “Player Hating Degree,” or recited lyrics from LL Cool J’s “Doin’ It,” my entire spirit lit up. “That’s how my homeboys and I talk,” I would randomly say aloud. The first time I heard him say, “As cool as the other side of the pillow,” I turned my pillow over and realized exactly what he was talking about. It was like learning some new discovery or something. He was awesome, and instantly became must-see TV. My homeboys and I would get together to watch football and basketball games, and when he was the lead, we all made each other be quiet, so we could listen to Stuart Scott talk about the games in a voice that represented us. I know it probably threw some of my others friends off that we revered him so much, but as unapologetic as Stuart Scott was in front of a camera, we were the same for having a voice that represented us.

When 9/11 happened, I was a 19-year-old sophomore in my dorm room at Navarro College, laying in the bed. I turned my TV on, with ESPN being the first channel on the screen as usual, and Stuart Scott was the voice to tell me that the first plane hit the World Trade Center. Not my mother, not my father, not my roommate, or suitemates. Stuart Scott. He was the first voice to tell me about the changing course of history. 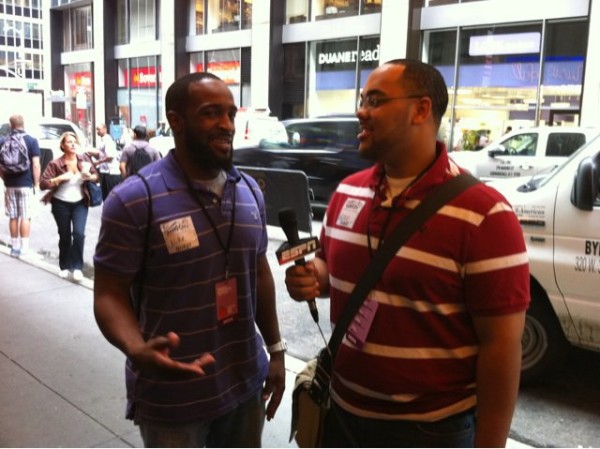 I can only imagine how many people he inspired to want to pursue a career in journalism. When it was time to pretend to be a sportscaster with a mic in my hand, it was Stuart Scott I pretended to be. There was Nike event I went to several years ago in New York City and Ed and I pretended to be him on the street. An ESPN rep had a microphone and it gave us a chance to act out our childhood hero, if only for a moment, and we did it. I don’t remember which of us asked for the ESPN microphone or if we just stole it and put it back when we were done. He interviewed me, I interviewed him, and it was a complete blast.

Stuart Scott is a hero for many. He did what we, as humans, should all aspire to do. He made the world a better place than it was before he got here. He helped brought more substance outside of simply watching the game, he brought enthusiasm, he brought passion, and he brought soul to what I, and many others, watched every single day. For that, he’ll always be revered in the eyes of mine and others; a true OG.