There’s a saying that has lasted the test of time. It is safe to say that everyone, from all walks of life, has applied it to at least one situation in his or her life. It is very simple, yet eloquent and open to interpretation …

You always remember your first time.

At 30 years old, there are many firsts that I will always remember. The first album I ever bought with my own hard-earned money, the first girl I ever kissed and the first time I ever parted ways with my family are three instances that I can tell anyone about at length. Those three events are embedded in my memory and all for their own distinct reasons.

There is another “first” in my life, and it took place on the morning after a white Christmas in the Dallas/Fort Worth Metroplex. It was the first time I ever went to buy a pair of sneakers on the actual release date. I felt like I absolutely, unequivocally had to have these particular pair of sneakers, and while it may seem blasphemous to some to say I finally felt like that at 30 years old, my road to fully appreciate sneakers was born over two years ago on a Nike trip in New York City.

The good people at Nike gave me an opportunity to come out and cover the World Basketball Festival, and for someone who was already a slave to all things Nike, along with the fact that I was unemployed at the time anyway, it was a match made in heaven. Initially, the trip was solely about basketball, and that was fine with me. It never really crossed my mind that I would meet people and have experiences that would change the way I carry myself and view certain things, but that is exactly what happened.

Now if you’ve ever been to New York, then you know it’s almost another country in itself. I had never, and still have yet, to see such a diverse collection of people all in the same damn place at the same damn time. It was overwhelming, but very welcoming as well. Also, the most obvious distinction was footwear. Granted, I had seen people wear shoes and take pride in them. Hell, plenty of my friends worked at Finish Line, Foot Locker, Champs, Nike Stores and all that, but even with them, I never really felt a personal connection to have my shoes be a reflection of me or to take pride in them. So when I was in New York, my feet reflected just that: a bamma from Texas who just put whatever on my feet that I felt like putting on. In retrospect, I don’t even recognize the person I was, from a mere footwear standpoint, but back then, I really did not give a damn about what was on my feet at all.

See, to really appreciate the first time, it simply isn't about going to get some sneakers I wanted badly. No, it was about why I felt like I had to have them, and that trip two years ago in New York City started it all. I met The Sneaker Sensei, John Gotty, and the man was like Master Splinter, Lucius Fox and Yoda all rolled into one. The man had on some shoes, and even though I don’t remember what they were, I do remember thinking, “Damn, this dude really takes pride in what he puts on his feet,” so I chopped it up with him. He answered every single question, every single comment I threw at him, and the thing about me is when I am intrigued by something, whether it is music, books or, at the time (finally), shoes, I dive in.

He literally showed me the light and did so in a way that an older brother would do: schooled me on plenty, taught me how to hunt and how to fish for sneakers, but also challenged me to figure it out on my own. There were other people as well who took the time to tell me about shoes, certain features and all that, but Gotty is the first that talked about them as a lifestyle, a sign of respect, a badge of honor, a stamp. After that, I was hooked on shoes, and even though I still had some bullcrap on my feet during that trip, I made it a point, from that day on, to make sure that my feet would always be presentable, as well as to just get what I like and not what the masses dictate. 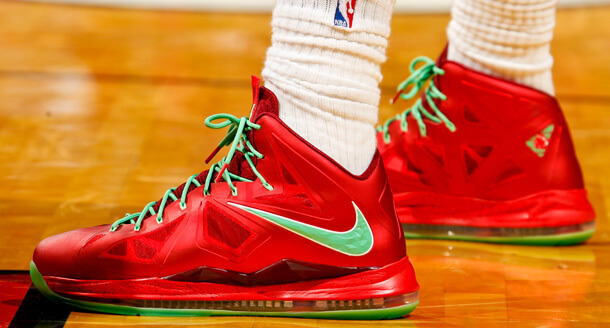 The day before, on Christmas Day, the Metroplex became the recipient of a white Christmas. In other words, it snowed. A lot. Even though snow isn’t breaking news to people who live elsewhere, inclement weather of the cold variety causes drivers down here to be prone to plenty an accident on the road. See, I knew the Christmas LeBrons were coming out on the 26th and did my preparation to be in the best position to get them, but Mother Nature decided to “mess up the church’s money” by giving me snow and ice to deal with the day before the shoes dropped. However, it was going to take more than some snow and ice to stop me from getting those shoes.

So on Wednesday morning, after warming up my car for damn near 30 minutes, as well as scraping off snow, ice and other bullshit off my car, I hopped in and started to drive, inclement weather be damned. Gotty already laughed at me that morning, via e-mail, for missing the online drop on the official Nike website, so the only way I was going to get the shoes I wanted was to take on the elements and go get them.

After four stores not having them, I remained undeterred. Annoyed, yes. Irritated, absolutely, but I was absolutely determined to get those damn shoes. After watching The King do work in them on Christmas Day, along with pictures of the shoes floating on my computer screen for the past 7-10 days, there was no way in hell I would stop until I got them.

The fifth store ended up being a Nike Town at North Park Mall, and even though they had the shoes, the journey was far from over. I was directed to a backdoor behind the store, and what awaited me when I got there? A line of 15-20 people and they were all trying to get the three versions of Christmas shoes (KD, Kobe and LeBron). That was the first time I started to think “defeat may be near,” because after all the prep time and after striking out at four prior stores and two malls that morning, I had yet another obstacle to take on. Still, I got on to the end of the line when two little kids, one around 13 years old and another one no older than, maybe, 10, got behind me.

I don’t know why, but seeing those little kids out there with me, a grown-ass man, along with the other grown people in front of me in sub-20 degree weather, gave me a second boost. It was kind of like seeing The Ultimate Warrior get crunk after kicking out from a near pin after the Macho King gave him five flying elbows off the top rope at WrestleMania VII. I was tired as shit from only sleeping four hours the night before and my tank was on E from driving all over the Metroplex that morning, but those kids gave me life. 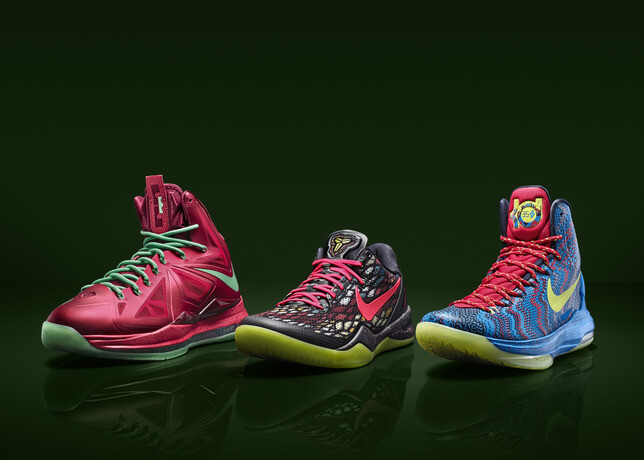 Kids are dope as hell, and seeing them get excited about what they wanted broke me out of the funk I was in. They told me what shoes they were in line for, and the younger one said, “If they don’t have 'em in here, I’m gonna go order them hoes online.” I couldn’t help but laugh, and I did exactly that. The three of us bullshitted in line together for a few more minutes, and I told them to go ahead and get ahead of me. Hell, they weren’t going to get my size anyway, so I let them skip.

Shortly thereafter, the lined thinned tremendously when a Nike rep came out and informed the crowd that there were no more Kobe Christmas sneakers, and judging by the reaction of the crowd, that’s what quite a few of them came for. The rep asked who was interested in the KDs, and everyone's hands went up except mine. Next thing I knew, the rep came to me, asked what I needed and the rest was history. I got the shoes, and I was on my way back to Denton County.

This post is far from simply being about a pair of shoes made specifically for the best basketball player in the world. No, it is the culmination of events that began two years ago in New York City, slugged on through the duration of 2010, all of 2011 and damn near to the end of 2012. I had never, and I mean ever, gone to a store on a release date of a shoe, because I had no reason to, but after yesterday, I can see why people do it.

Everyone has their reasons and rationale as to why they cop Jordans, Kobes, LeBrons, KDs or whatever shoe it is that they feel “they absolutely have to have.” There’s the old saying that goes, “It’s more than just a game.” Trust, when it comes to shoes and the people that love them, they are definitely more than just the shoes. Take it from me.

7 Replies to “My Journey To The LeBron X Christmas Sneakers”