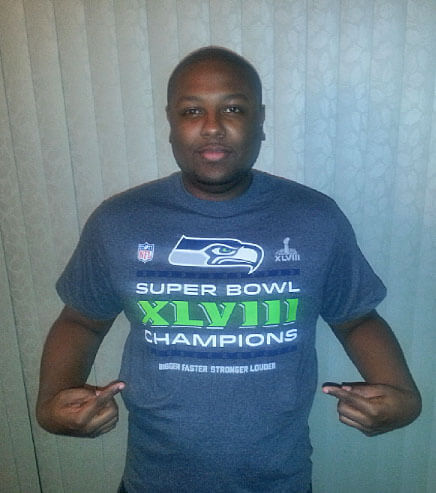 Chauncey Balsom remembers it like yesterday. It’s a question other fans have likely asked when their teams underperformed, didn’t live up to their expectations or, quite plainly, sucked.

“Why did I pick this team?”

The 29-year-old may be a sales and marketing rep, but attempting to pitch or promote another team besides the Seattle Seahawks was out of the question for his teenage self. His father introduced him to the game early and exposed him to the Tampa Bay Buccaneers. While those years showed him football in real time, Balsom credits his dad for letting him decide which team to support.

“My dad introduced me to football early and let me decide which way to go in regards of who to root for,” Balsom recalls. “He basically said, ‘Here’s the game,’ and showed me football but never forced it down my throat. When I decided to cheer for a team that was across the country, he was cool with it.”

The youngster also used another tried-and-true method of deciding on a favorite team — Madden video games. Back in the day, Balsom would pick squads according to who the worst teams were. His logic was simple. If he picked a team that wasn’t good, then he could truly learn how to play. When he faced better opponents, he would be ready for anything.

By the time he picked the Seahawks, Shaun Alexander was on the team, and with the memories fresh of the destruction he laid on the Florida boy’s Gators, the Seahawks selection stuck.

“Shaun Alexander is responsible for probably 90 percent of my Seahawks fandom,” he admits. “He used to terrorize the Gators, my favorite college team, so I hated him. It was a hate, but it was also an admiration and appreciation for how he played, so once I was able to root for him, there was no turning back.”

Sure, the Seahawks had recently hired Mike Holmgren from the Green Bay Packers. Yes, the Seahawks had Alexander, one of Balsom’s most-hated college players of all time due to the sturdy back’s terrorization of Gainesville with the Crimson Tide. And while the cornerstone tailback eventually became his favorite Seahawk of all time, wins are important for a fan. Back then, the victories weren’t coming in bunches for a while. Besides, if Balsom wanted to watch bad football, he would have kept the line of fanhood closer and stuck with the Buccaneers he became familiar with as a child.

However, that wasn’t an option for Balsom. He knew which team had his heart and prepared to go through it all with his squad no matter how long it took and regardless of how far away the Seahawks were.

The conundrum of having his favorite college team in his backyard yet rooting for a pro team on the other side of the country is something Balsom takes in stride. He understands there are people who question how he can have a favorite team in another time zone when he has one in his backyard. He doesn’t let that get to him.

“I get it all the time, man. People on Twitter will always be like, ‘Oh, so if you’re a real fan, then when did what’s-his-name play for the Seahawks?' when they don’t even know their damn self,” he says with a laugh. “My friends who have known me forever don’t give me grief about it, but I catch it from the outside quite a bit.”

Balsom currently can laugh loudest with his team being the defending champs. But, if one is expecting braggadocio from him, it won’t come. It may be a reflection of how he chooses to watch his team. Perhaps it’s a reflection of Pete Carroll’s authentic plan that wooed many other Seahawks fans.

He readily admits no vision of a Super Bowl this fast, but he was exposed to Carroll’s methods at USC enough to know Seattle was due for a championship makeover. Regardless, he remains not only focused on the moment, but thankful for what the recent incarnation of the Seattle Seahawks has done to this point.

“Their approach to the game is inspiring,” says Balsom. “Some of these guys are younger than me, but the mind-set that Pete Carroll has instilled with them is contagious. They’re a nitty-gritty bunch, and they will knock your head off, but they’re gentlemen and good sports at the end of the game … They work hard, and they have a mentality about wanting to be the best that is truly priceless. It’s what I truly enjoy about this team.”