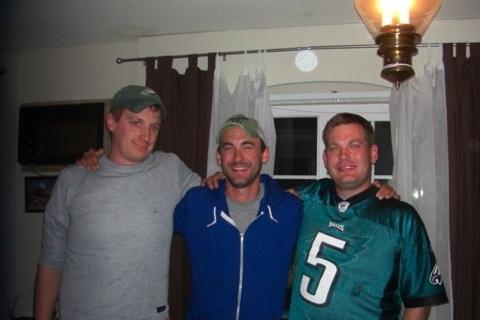 Here at The Sports Fan Journal, we hope to evolve and deliver something not found in any other corner of this here internet. We bring you Mark Trible and Dillon Friday's NFL Countdown project. A fan from each NFL team will be featured as we anxiously await Sunday's full-schedule kickoff.

Sports fans come in all shapes and sizes. They come from various backgrounds, time zones and upbringings. Each has a distinct path he or she walks throughout life. It shapes who the fan is, and despite being different for each individual, the whole crowd is united with the love of sports.

Brad Rutter is no different. For most people, he is known as arguably the greatest Jeopardy! player who ever lived. After all, he beat the great Ken Jennings in the 2014 Jeopardy! Tournament of Champions. It’s a distinction to be proud of.

Rutter is also a fan of the Philadelphia Eagles. Even with the adulation that comes with living in the city of stars in Los Angeles, and the countless people who know him from his exploits on the long-standing show, he is like plenty of fans when it comes to how he watches his team. 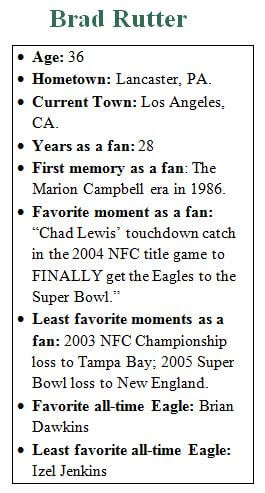 “I like to watch them alone in my house,” the 36-year-old actor and producer says with complete conviction. “If I do go out, it’s to a local bar that has Sunday Ticket, but I definitely prefer to watch them at home.

“When the Eagles run the ball, my body tenses up,” Rutter continues. “It’s something I never noticed until an ex-girlfriend of mine said it to me when we watched a game together one time. She actually told me this. It’s better for me to stay at the house.”

The Lancaster, Pennsylvania, native immediately recalls his first memory of the Eagles.

“My first memory of the Eagles comes from the Marion Campbell era,” Rutter reminisces, citing a time when Campbell coached Philadelphia before Buddy Ryan took over in the late 1980s. There were better times ahead of that first glimpse into Eagles football.

Soon, Rutter was introduced to Randall Cunningham, one of the most exciting players to ever play the quarterback position. Despite fans of Philly tending to take on the identity of the defense, especially during the Ryan years, Rutter knew he was seeing something special in Cunningham.

“Randall Cunningham was so ahead of his time,” says Rutter. “The stuff we see quarterbacks doing today, he was doing those things 20 years ago. He certainly played an exciting brand of football.”

His quarterback recollection continues when discussing other quarterbacks in Eagles history, including Donovan McNabb, Michael Vick and, presently, Nick Foles.

“Donovan did get a bad rap at times, but there’s no doubt that he is the greatest quarterback in Eagles history,” says Rutter. “As for Vick, I can say that one season (2010) was one of the most fun times I’ve had as a fan, and his Monday Night game against the Redskins remains one of the most exciting things I’ve ever seen in my life.

“As for Foles, the jury is still out, but he had a great season in 2013,” Rutter continues. “The numbers were fantastic, and maybe they were better than his actual play, but he did play very well. He has a lot of upside, and with another year in this offense, it’ll be fun to watch him progress.”

Rutter certainly has had his share of fun moments over the years, but there have been some frustrating ones as well. He counts the 2003 NFC Title Game loss to the Tampa Bay Buccaneers as his least favorite moment as a fan, and even with the game being 11 years old, there is no shortage of exasperation when recalling what it was like.

“Tampa was terrible in the cold,” Rutter recalls, which was evidenced by their 1-21 record in 40-or-below-degree weather going into the late-January clash in 2003.

“Everyone thought we would win. We jumped out to a fast start and still lost. To this day, I don’t understand.”

If there’s any other time that rivals the Bucs-Eagles NFC Title game, it was two years later in the Super Bowl. Well, eerie is a more accurate term to sum it up.

“I watched the Super Bowl at a local bar in Philly,” starts Rutter. “After the game, it was completely quiet. You could hear a pin drop in there. Even in the streets, it was just quiet. There were throngs of people in the street, but it was silent.”

Rutter reaches similar disappointment levels on Jeopardy! when sports questions arise and he's not the first to answer them. That goes tenfold for Eagles questions, although they are exceptionally rare.

“There was a time when there was a question about John Elway and about Richard Dent in regards to Super Bowl MVPs,” Rutter says.

“Anytime a sports question is asked on Jeopardy and I’m not the first person to buzz in, I’m VERY disappointed,” adds Rutter with a laugh. “The one thing I can pride myself on is when it comes to sports, I know more than any of those people.”

Disappointments aside, Rutter wouldn’t trade being a fan of the Philadelphia Eagles fan for anything in the world. Year two of the Chip Kelly era begins this weekend, and with his team being the defending division champs, there’s good reason to be optimistic.

“I’m looking forward to seeing how the defenses settles in,” says Rutter. “We got better as the season went on last year, so that helps. Plus, the division sucks, so if we do everything right, we should be okay.”

"Will Leitch Protects Himself From The Arizona Cardinals"