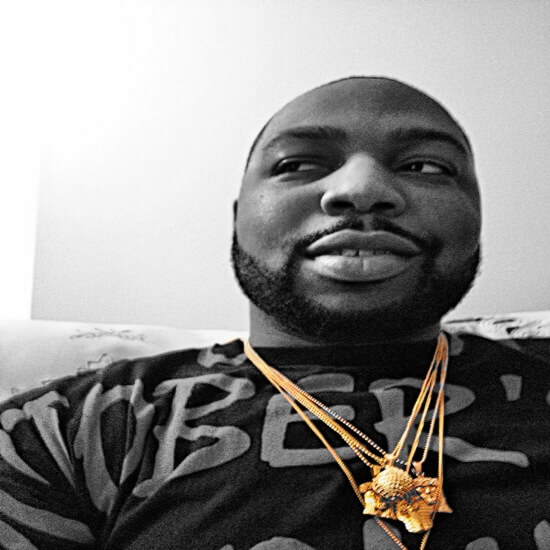 Kris Rothstein has experienced a roller coaster of emotions with the Indianapolis Colts in recent years.

While he has been a fan of the team since they drafted Peyton Manning with the first overall pick in the 1998 NFL Draft, the last five seasons have been especially trying for him. Events unfolded that would test any fan’s allegiance. He’s seen his team lose a Super Bowl, the franchise quarterback and fall to the depths of hell.

He’s also witnessed the Colts rise and draft another potential franchise quarterback — and watched that QB grow right before his eyes in his first two seasons.

Rothstein stuck with them each and every week. He took the taunts from people on Twitter who came for his head after every loss. He languished alone at his home in Toronto, Ontario, and watched the games in silence. 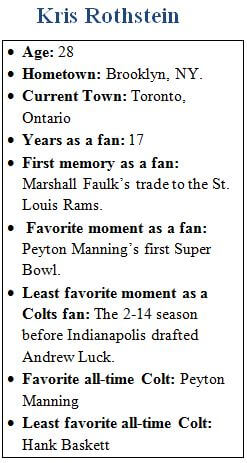 It was obvious to on-lookers that he was in pain.

“I personally enjoy watching games alone, because I get frustrated with (the Colts),” says Rothstein. “I know when I stay at home, I can curse and punch s*** in peace.”

While Rothstein has had moments of frustration with his team, he’s also been able to celebrate some great times.

Whether it was the Colts finally slaying the dragon known as the New England Patriots in the 2007 AFC Championship or the Colts winning the whole damn thing, Rothstein was right there celebrating it all.

“The Super Bowl win against the Bears is definitely the high point in my fandom with the Colts,” he says. “I was in Miami, coincidentally, at the Fountainebleau Hotel. After the Colts won, I went to the strip club to celebrate. I almost died that night. It was a great feeling — a great feeling.

“That was huge not just for the Colts, but for Peyton Manning. (Tom) Brady has so many, and as Colts fans, we just wanted Peyton to get one. It was a big deal. He got the monkey off his back.”

Rothstein calls Manning as his favorite Colt of all time. There’s no doubt in his mind about that, and while he recognizes Peyton’s greatness, he understands the Colts have been very fortunate during his tenure as a fan.

“We’ve been blessed with a lot of great players, so I can’t complain too much,” says Rothstein. “We’ve always drafted well and have been very fortunate over the years.

“Even during the year Peyton sat due to injury, we sucked, but we also were recipients of one of the most QB-heavy drafts in years. It’s generally worked out in our favor.”

Keeping with the theme of good fortune, Rothstein is looking forward to the 2014 season. While the obvious reason is the continued maturation of Andrew Luck, there are a couple of other players he’s excited to see.

“There are so many different things, man,” says Rothstein. “The further development of Andrew Luck, the actual Redskins/Colts game that is finally happening and the return of Reggie Wayne.

The Washington/Colts game features the top two picks of the 2012 NFL Draft in Andrew Luck and Robert Griffin III. It’s a matchup Rothstein can’t wait to see. He plans on attending the game and being a part of the confirmation stage that the best quarterback of that draft plays for his squad.

“I’m definitely going to the game this year, absolutely,” Rothstein declares. “There was a lot of hype around the two quarterbacks coming into the 2012 Draft, but facts are facts: Andrew Luck is solidified due to team success and playoff success so far.”

While Rothstein also acknowledges another promising quarterback from that draft class in Seattle’s Russell Wilson, he keeps it real as only he can.

“Don’t get me wrong: Seeing Russell Wilson get his ring last year was awesome, but no one in their right mind will say Russell Wilson is better than Andrew Luck,” the Brooklyn native says.

If it looks like Rothstein is completely sold on Luck, it's because he is. It didn’t take long. The Colts' comeback against the Kansas City Chiefs in the wild card round of the 2013 NFL Playoffs last season confirmed what Rothstein already knew — Andrew Luck is the real deal.

Rothstein’s ready to ride with him and the Colts beyond the point of the wheels falling off. After what he’s seen as a fan over the years, that’s the only way he knows how to be.