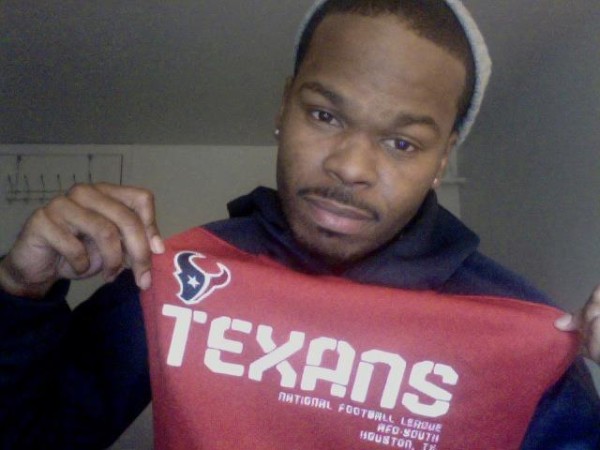 It’s where he was born and raised, and despite leaving to attend school at the University of North Texas several years ago, the man known to his friends as J-Mark always remembers where he came from.

“I love Houston, and football is my first love. My favorite team growing up was the Oilers,” recalls Mark. “Football was literally it for me when it came to sports. Growing up in Houston, that’s all I would watch. When they left in the mid-'90s for Tennessee, I started watching more Rockets basketball, but I always held out hope that we would get a team again.”

Upon arriving in high school, he remembers the whispers of a potential expansion team coming to Houston. When the whispers became discernible sounds, he couldn’t wait to see his new team.

“My friends and I heard rumblings about a potential team in Houston, and we all got excited. Once we got the number one pick in the 2002 Draft, I was back on the bandwagon,” Mark says. “David Carr was the number one pick, and I went and got my David Carr jersey. It was definitely an exciting time in the city.”

Fans have plenty of memories — good and bad — in their journeys. There were some growing pains early on, which the 28-year-old degree holder in marketing fondly remembers.

Despite the rough times, Mark still stuck with his team, and the payoff came in 2011 when the Texans won their first division title and also earned their first playoff win against the Cincinnati Bengals. 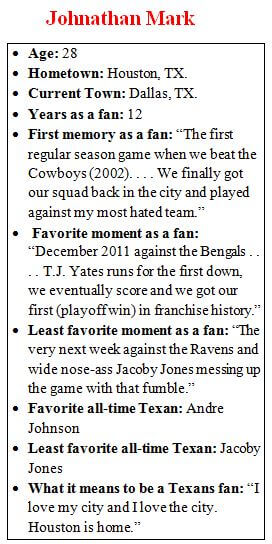 Despite the highs he had as a fan during that season, the opposite came the following week in the divisional round against the Baltimore Ravens. To this day, his least favorite former Texan is the cause of his frustration.

“That was our year, bro,” says Mark, the sound of frustration still in his voice as he recalls the loss more than two years later. "We beat the Bengals two weeks before to win the division.

"Then, we whooped their asses at home for our first playoff win. We felt good going into Baltimore. Our defense was great, and T.J. Yates was playing well. Yeah, Matt Schaub and Matt Leinart got hurt, but T.J. was doing a good job and we had a chance to win and get to the AFC Championship. All of a sudden, Jacoby Jones fumbles a punt, and everything went to hell from there.”

It’s the kind of stuff that just about any fan can relate. To make matters worse, Jacoby Jones went to Baltimore the following season and not only caught the touchdown pass to send the Ravens/Denver Broncos divisional game into overtime, but he also made huge plays in the Super Bowl. Those acts pretty much sealed Jones’ fate in Mark’s eyes.

Mark, who now lives in Dallas, also experiences frustration in the lack of options for watching his team play. Houston is about four hours away from Dallas, but when it comes to games on television, they may as well be states apart.

“That’s one thing that sucks about being a Texans fan in Dallas, bro,” says Mark. “I can rarely go to a bar here and watch them, and I can’t watch at home because they aren’t on TV.

“There are times when I just drive back to Houston to watch the games. TV might show the last minute of a game before they switch, but unless it’s nationally televised, you will not catch a Texans game in Dallas, bro.”

Despite some frustrations, the good overwhelmingly outweighs the bad. Mark is excited about the upcoming season when the Texans will have an opportunity to atone for a season of disappointment in 2013. There won’t be any long losing streaks, nor hopes for the first pick in the 2015 NFL Draft.

With Jadeveon Clowney joining J.J. Watt on the defensive line along with the usual suspects in Andre Johnson, second-year wideout DeAndre Hopkins and Arian Foster on offense, Mark has reasons for renewed optimism. He’s also hoping Case Keenum — a University of Houston alumnus — gets another shot to lead the team.

“Case was one of the few bright spots last season,” says Mark. “Case went to college at U of H, so it’s easy to root for him.

"When he got his chance last season on Sunday Night Football and went crazy, it was so much fun to watch. Plus, hearing him say ‘Third Ward Cougars’ during his intro did it even more for me. Being from the south side of Houston, it really got me live. Sh*t, it’s getting me live again!”