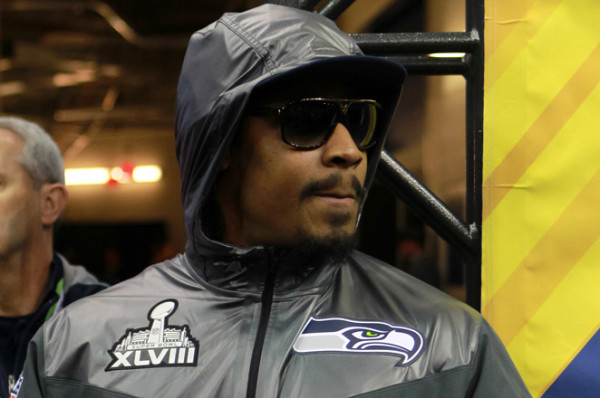 My immediate memories of being a sports fan revolve around the actions on the court and on the field. Whether it is Michael Jordan shrugging his shoulders after a three-point barrage in the 1992 NBA Finals, Michael Irvin catching a bomb from Troy Aikman or watching a baseball launch over 400 feet into the stands off the bat of a Texas Ranger at The Ballpark in Arlington, the common theme is that actions of some of my favorite players are louder than words.

Which brings me to Marshawn Lynch, aka Beast Mode.

My favorite Marshawn Lynch moments revolve around his football ability, the way he makes people miss, the way he drags wannabe-tacklers with him, as well as his ability to run through defenders. Simply put, Beast Mode is about that life. He lets his play do the talking, and for us who are fans of him, that’s all the talking we need. That’s why watching the last two days of media obligations have not only gotten on my damn nerves, they’ve also left me completely fed up.

On Tuesday during Media Day, Beast Mode spoke for a little over six minutes, but it was plain as day that he would have rather not had to do so. It’s not that Beast Mode is a jerk. He's far from that. It’s just that he would rather not talk. He just wants to play, and yes, he gave an interview to Deion Sanders, but that’s Deion, not some longstanding, entitled member of the media who feels that a player “has” to speak to him or her. No, Prime Time is Prime Time, and it was obvious that when they were speaking, Beast Mode felt completely comfortable and Deion did his part to aid in making him comfortable. If that was Beast Mode’s last media obligation for the week, then all would have been well …

… but then came Wednesday.

Watching Lynch sit in a chair with a horde of reporters all around him with microphones in his face and talking over each other was not an ideal situation, and while some people are able to maneuver in that type of setting, it’s obvious that Beast Mode would prefer not to. He was jittery the entire time, and anyone with a set of eyes and half a brain would tell he was uncomfortable. Once again, it wasn’t a case of him being a jerk or standoffish during that time. Hell, he even reiterated his appreciation for the attention, but he would prefer to not have to be there and said it respectfully.

If y’all are a bridge between the players and the fans, and the fans ain't really trippin', so then what’s the point? What’s the purpose? They got my back. I appreciate that. – Marshawn Lynch at his mandatory media session on Wednesday morning.

When Lynch said this to a reporter, it made complete and total sense. As a fan, I understand and appreciate the role of the media, and when players want to talk, it’s all good. As with actions on the floor, some of my favorite sports memories involve the media talking to athletes, but when a player doesn’t want to talk to the media, I am perfectly okay with that as well. I have yet to find a fan that cares, for real, that Marshawn Lynch would prefer not to talk to the media, and before someone chimes in and says, “Well, Lynch doesn’t HAVE to do anything,” you’re right, but that comes at the expense of losing his hard-earned money.

Once again, Lynch has a point, and while I’m sure the reporter’s heart was in the right place when he said he didn’t think anyone had a problem with it, that’s simply not true, as evidenced by the Pro Football Writers of America’s comments about Beast Mode’s conduct yesterday. When a statement starts out as “several of our longstanding and high-profile members were appalled by Mr. Lynch’s conduct and refusal to answer questions,” I could only laugh at their entitlement.

First off, it brings home a point that Michael Tillery has made over and over and over again, as well as something Jesse Taylor wrote about earlier this week on TSFJ. The media needs diverse voices to help capture the narrative and the essence of the game to the best of its ability. Secondly, instead of the PFWA’s “longstanding and high-profile members” being appalled at Beast Mode, maybe they should be appalled at their damn selves for not diversifying their clique. Third, he answered questions, so them saying “his refusal to answer questions” is not true. He just didn’t answer them to their liking. It’s easy for people to point at Lynch and say he’s the problem because people will run with that instead of looking at the totality of the situation and realizing that the other side could use some work as well.

The bottom line is this: I’m ready for the game, as are fans all over the world and, especially, Marshawn Lynch. He summed it up perfectly in his interview with Deion on Tuesday when he said that he’s never seen any talking win him anything. Come Sunday, he’ll do his talking on the field. Until then, leave Beast Mode alone.