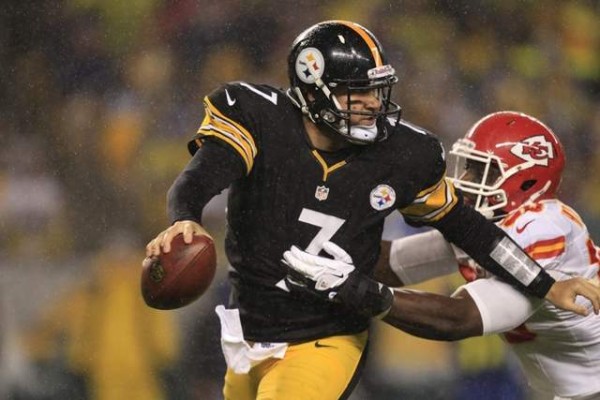 Monday Night Football featured the Kansas City Chiefs traveling up to Pittsburgh to take on the Steelers, and while I had absolutely little-to-no desire to watch the game, I woke up Tuesday morning wishing that I did. However, it wasn't because I missed an amazing game. No, it was due to an act after a sack of Big Ben Roethlisberger that had me regretting going to bed early last night (the incident is described at the end). Once I saw what transpired, this post came to life.

It would be impossible for me to name the absolute funniest sports celebrations ever, so what this will consist of is six of the funniest in recent memory and you, the people, are welcome to chime in with your picks as well. 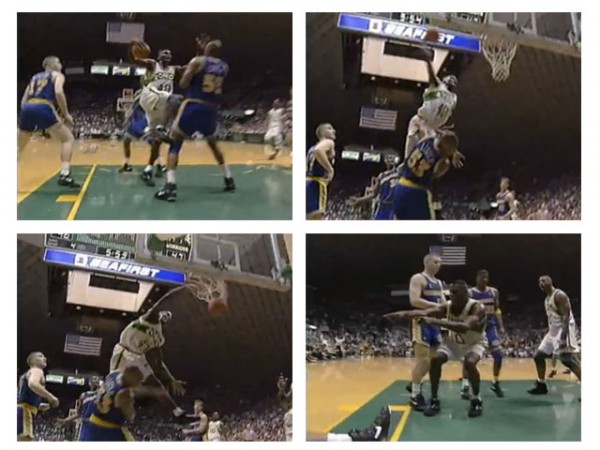 This celebration is damn near 20 years old, and I still cry with laughter anytime it is shown. The backstory is that Lister fouled Kemp hard the game before and Kemp warned him that he was going to get him. Either Lister didn’t take heed to Kemp, or he did and it simply didn’t matter.

It was bad enough that Lister got dunked on, and it was even worse that he collapsed to the floor from the sheer force, brutality and might of the Shawn Kemp one-leg, one-hand jam, but the aftermath is what has people talking about it nearly 20 years later: the point.

When Kemp pointed at Lister, the announcers, crowd and other on-lookers went even more berserk, and all Lister could do was pick himself up off the floor and get back on D. To this day, it ranks as the most disrespectful and funniest taunt mine eyes have ever seen. 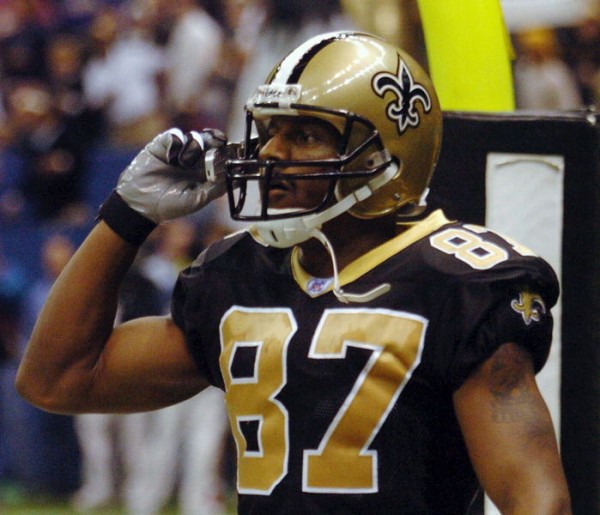 The Joe Horn Cell Phone Game ranks right up there with the Saints returning to glory during the 2009 season, and while I’m sure most Saints fans will say winning the Super Bowl was the highlight of their time as a fan (rightfully so), the Joe Horn Cell Phone Celebration isn’t too far behind.

I can honestly say that even though I knew Joe Horn was fond of celebrations, I did not see this one coming. When I saw his teammate searching behind the padding, I had a feeling something foolish was about to happen, but I had no idea Horn would get a flip phone, hit the speed dial on his phone and let whoever was on the other line know that he was the man. I died laughing watching it on live TV, and I’m dying laughing as I am watching it now, many years later. 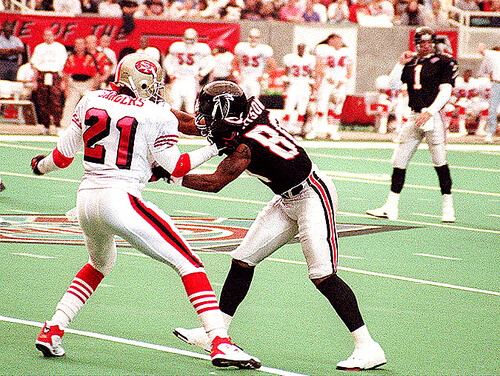 Deion Sanders in His Return to Atlanta as a Niner

This is not only one of the greatest celebrations of all time, but it is also one of the funniest. Of course, the reason why is because there is a backstory to this particular celebration by The Great Deion Sanders. This celebration took place during his first trip back to the Georgia Dome as a member of the San Francisco 49ers, and he was bound to let the fans of Atlanta know whose house it was. Well, during the game, he and Bad Moon Rison got into a bit of a scuffle. No big deal, nothing to see here, these things happen, right? However, Rison made a mistake of waking up a sleeping giant, and once that happened, this followed not too long after …

Sure, Deion has picked off many a pass in his career and performed many a high-step, but this one takes the cake and it is due to all of the ingredients that made up the masterpiece. 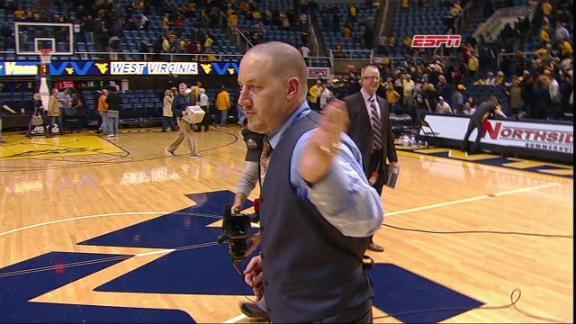 One thing about celebrations is that they’re pretty much open to anyone. More often than not, though, players are doing the celebrating, but there’s something about seeing a coach celebrate that will always make me laugh even harder. On top of that, let the coach not care that opposing fans get pissed at him, and it’s even better. Case in point: Buzz Williams and this celebration below after a Marquette win against West Virginia last season.

Fans were all sorts of pissed off, and they showed it by throwing debris and hurling all sorts of insults, epithets and curse words at him. One announcer was hit with a random piece of debris, but did Buzz care? Of course not, and it is evident when he confirmed what he did on the opposing team’s home court. Real coach and a real man, that’s for damn sure. 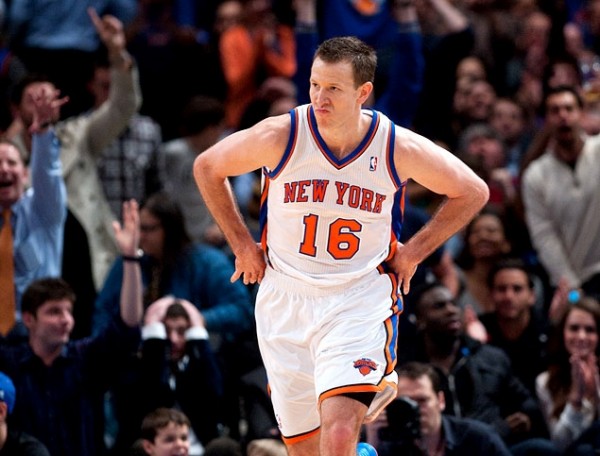 For starters, we can say the original version of this move was prominent in the old wrassling days. Since then, it was brought to the mainstream by Aaron Rodgers and went on to spawn a series of State Farm commercials centered on a move called the Discount Double-Check. Don’t get me wrong; as much as I like Rodgers, when he does the move, I get crunk more than anything. I don’t laugh and never did until Steve Novak took the move to another level.

This is funny for so many reasons. Steve Novak looks like he has about as much athletic ability as an entertainment center, a box of highlighters and a dry erase board. Dude looks like he should be somewhere teaching trigonometry, or balancing checkbooks, or taking quarters out of the machine at the car wash, and while he just might be all of those things in his spare time, he is also one of the best shooters in the entire league.

Just imagine if he is invited to take his act to the 2013 Three-Point Shootout during All-Star Weekend. If the invite comes and he accepts, fans all over would be introduced to the man who took Aaron Rodgers’ move to the hardwood. 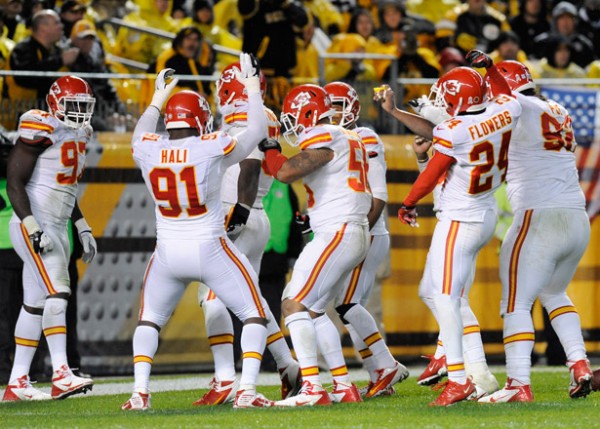 Early in the third quarter, Ben was sacked by Big Tamba Hali and Justin Houston, and while the sack was impressive, what happened next took the cake. Hali and Houston quickly converged to pay homage to Kid ‘n Play and perform a dance on Big Ben’s fallen corpse. For reasons that are numerous, this is one of the funniest things I have ever seen in my life.

First, the fact that they did the Kid ‘n Play is hilarious enough, but to have the sheer audacity and gall to do so in Pittsburgh and at 1-7 is even funnier. Basically, those two became two of my favorite players last night, and they have forced me to now pay them attention for the remainder of the season and beyond. God bless them.