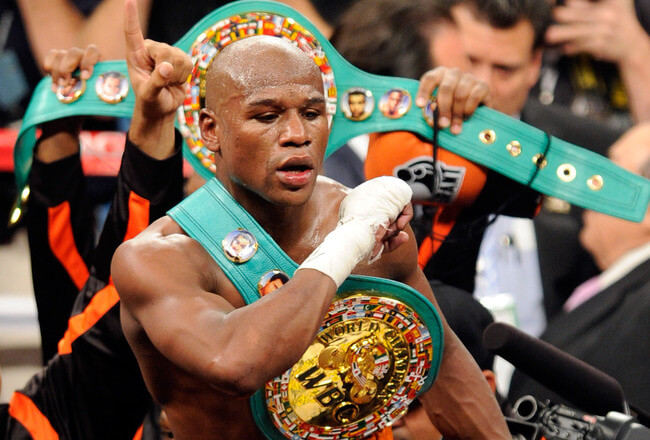 Note: the only exception is Father Time.


This Saturday night will be a action-packed one for sports fans everywhere. For fans who are into hockey, the Stanley Cup Playoffs will be on for them to partake in. For followers of baseball, there are bound to be games all over national television, as well as their respective local affiliates. Basketball fans are busy enjoying the first round of the playoffs, which will feature game threes and fours for the masses. Shoot, your boy will be in attendance this weekend when the Thunder take on the Mavs in Dallas.

However, the most important sports event of the weekend will be taking place in a city that does not host a single sports team, but hosts, arguably, the biggest star in sports: The Incomparable Floyd Mayweather.

There is no denying the star power of Floyd Mayweather (well, one can try, but it would reek of haterism). He’s been able to forge a living working on his terms, which plenty of people would love to be able to do. He is the single-biggest star in boxing today and has been for quite some time. This weekend, he’s taking on Ed’s boy, Miguel Cotto, in what should be an interesting fight.

The build-up to this has taken place, mainly, via HBO’s 24/7, a show whose inception I am familiar with due to the first time seeing the series, it was courtesy of Floyd and his anticipated matchup with Oscar De La Hoya. Floyd was already a great boxer before then, but after the De La Hoya bout, the man became a megastar. He has yet to look back.

People who are tuning in Saturday to see Floyd lose should find another reason to watch, which, if you’ve paid attention to Floyd, are plentiful. He’s the greatest defensive fighter of our generation, a wizard in the ring and can adapt to any style quicker than anyone I’ve seen in boxing. The man admittedly doesn’t watch tape of his opponents, instead leaving that task to his trainer extraordinaire, The Hilarious and Wise Roger Mayweather. When he gets in the ring, his opponents basically have a round, maybe two, for their chance to get him. If they spend those rounds trying to figure him out instead, they’re already done.

Now, to speak on this being the approach for all 42 of the opponents he’s faced would be irresponsible, but I can say I haven’t seen Floyd in trouble in a fight that goes beyond two rounds in about the past five years. Sure, some of those fights went the distance, but when it comes to artistry, it isn’t so much about finishing a masterpiece quickly as it is about taking your time and making people, forcing them, to appreciate your art. Whether Floyd is your cup of tea or not isn’t the point; the idea is that if you’re a fan of the sport, you have to, at the absolute least, admire his approach in the ring.

Despite this approach, the artistry, the mastery, wizardry and the showmanship, Floyd remains generally unappreciated by a sporting public who has clamored to their boxing heroes for years. The reasons are numerous, but it’s always mystifying to see how fans used to clamor to their native pugilistic heroes such as Tito Trinidad, Ricky Hatton, and Julio Cesar Chavez, to name a few, but not to Floyd.

Sure, the case could be made that Puerto Ricans, the British, and the Latino fan bases just have an appreciation for their boxing icons that Americans don’t have, but it wouldn’t be accurate, especially when we see that fans have rallied behind Tyson, Roy Jones and, the most notable one of recent memory, Muhammad Ali.

Winning fights won’t be enough, which is a shame because, with the exception of Father Time (which Floyd has done a masterful job delaying due to timely breaks from boxing), there’s no entity in the sport of boxing that’s going to stop him anytime soon, and even though Father Time is, without a doubt, the sole undefeated entity in professional sports, I don't see him making an appearance in the MGM Grand on Saturday night.