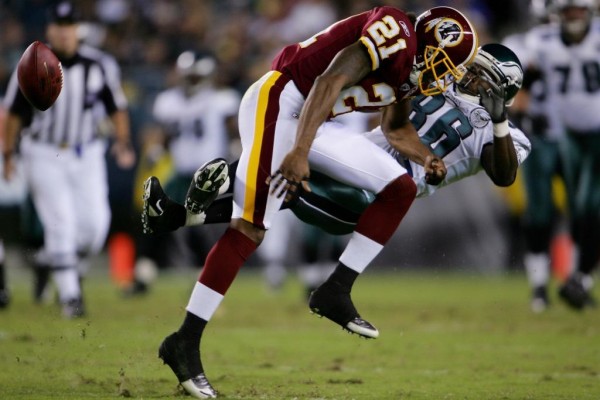 Five years have passed since November 27, 2007, and in that time, many events around the sports world have transpired. This site was not born yet, but in those five years, it has gone from its genesis to the next step. From ETSF to TSFJ, writers have come to bless the masses with an insight on the lifestyle of fandom, sports and culture in a way that was nonexistent in the past.

Something else happened on this day five years ago, but there is yet to be a viable replacement for its loss. Once the world lost this star, we knew it would be a long time before he saw another like him, and even though there have been over 1,000 players drafted into the NFL since then, as well as many more who have come through undrafted, an equivalent, or anything remotely close to an identical, physical presence on the scope of the NFL is still lacking. That star is Sean Taylor.

Today marks the fifth year of his untimely demise, but even with him gone, he is still very much here. Whether it’s watching today’s defensive players and seeing them make a play, only to go back and reminisce on what Taylor would have done on something similar, to watching a man play multiple positions on the field, Taylor’s talent and versatility put him in a select class of breed. Sure, there were players more accomplished than him while he was in the league, but it is no secret that Taylor was already a very good player and was on his way to being, arguably, the best at his position in the NFL and a perennial Defensive Player of the Year candidate.

It’s rare that a player who played such a brief time at the highest level of sports left such a collage of imprints on the game without reaching his prime yet, but that’s how authentic a player Sean Taylor was and it’s why he is still so revered today. He’s a Washington Redskin, which, sports-wise, means fans of the Dallas Cowboys, Philadelphia Eagles and New York Giants should hate him with a passion. However, he had the skills, the ability, ferocity and one-of-a-kind game that made fans of all three admire him, whether willingly or grudgingly. Personally, he was one of my favorite players ever, despite wearing that uniform, and it would not be a challenge to find other Cowboys, Eagles, and Giants fans, as well as fans of other teams, who feel a similar way, and that’s simply because regardless of a team’s colors, fans recognize game.

Every football fan I know has a Sean Taylor memory. Every single one, and while that might seem normal, sit down and think about a player who you can say, “Yes, I have a memory of something they did great on the field.” Now take that to 10 football fans and see if they can do the same about that single person. Justin Tinsley, a die-hard Dallas Cowboys fan, summed it up well over in a piece he wrote about Taylor seven months ago: Even though it seems like Sean Taylor was around for a while, especially since he’s so revered, the man would have only been 29 years old today, and even though he was already amazing, there are fans who will always wonder how soon we were to seeing a potential greatest of all time nominee at his position.

The man above graced the masses with Sean Taylor through his time at The U and as a Washington Redskin, and the man left enough memories on the field to last a lifetime. While it would be genuine to say he is missed, his impact on the game when he was present, as well as now with him watching from above, gives us all peace in realizing that he will always have a special place among fans who love the game of football.

Bull City Remember When Football Was A Gladiator Sport?
5