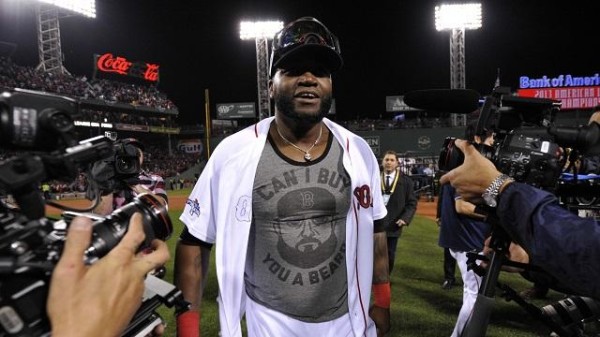 "This is our fucking City." -- David Ortiz

With five words, David Ortiz went from a baseball player to The Voice of the Citizens of Boston.

After the horrifying events during the Marathon last April, David Ortiz stepped on the field at Fenway, uttered those five words and the city and the team had their unofficial rallying moment of the season. Granted, the 2013 season was still much underway, but for a team who was God-awful the season before, one of the leaders of the Red Sox found a way to turn an ugly tragedy into a call for unity and, eventually a World Series Championship.

“I’m watching what Yadi is doing, and they’ve tried a lot. David’s just, he’s just, he’s David Ortiz. That says enough. The guy is a postseason stud and a stud in general . . . That’s why we call him ‘Cooperstown’ because he does Hall of Fame stuff.” -- David Ross on David Ortiz

However, it would be foolish to reduce David Ortiz's season to a sound bite. It's as if he stepped into the damn time chamber and reverted to 2004 Ortiz with his clutch hits during the ALCS end during the World Series. He never lost focus, never broke stride and when it seemed like his team needed some choice words, he brought them together like a preacher brings the congregation to attention. Granted, Ortiz shouldn't be mistaken for T.D. Jakes or anything, but that aint the point.

“I haven’t played with many superstars, but this guy right here is the epitome of a superstar and a good teammate. And I don’t think you could ever ask for more out of an individual than what he does on and off the field.” -- Jon Lester on David Ortiz

Once the dust settled and the final out was recorded for the Red Sox and Ortiz was named MVP of The Fall Classic, the godfather of the squad thanked everyone from his team to the fans and made sure to give one last reminder to all that were watching that Boston was their *bleeping* City.