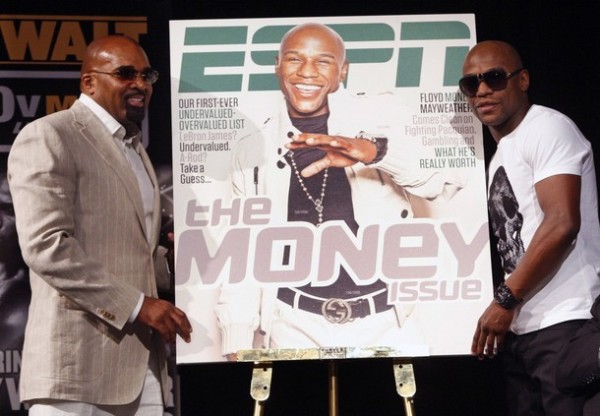 The inclusion of the #2 athlete on the five coolest is a first-timer. In the previous three editions, his name came up each time, but it was hard to include him due to the lack of frequency he displayed in the ring. As much as he was revered, Ed and I knew he needed to turn up just a tad bit more before we could justify his inclusion. That's why when the news broke that he signed a six-fight deal with Showtime that put him on pace to fight twice a year, one of the first things Ed and I said was simply, "Floyd's gonna be on the list." We didn't need to add, "if he wins," because if there's anything the sports public knows about the man formerly known as The Pretty Boy and currently known as Money Mayweather, it's that losing is not an option.

Floyd Mayweather is the most overwhelming force in boxing today. The way he commands attention not only in the ring, but through social media and his sheer visibility, is something that no other boxer has come close to duplicating.

“My team calls all the shots out of the ring, I call them in the ring.”

He fought two young and hungry fighters this year and beat them with an ease that was damn near frightening,  yet mesmerizing to watch. When the masses were skeptical of his victory over Robert Guerrero, he went on and whooped Saul Alvarez next, despite some people claiming Floyd didn't want those problems. He's even toned down the antics, in regards to his words towards his opponents. Gone are the days when he talked to opponents the way he did De La Hoya in 2007 or Shane Mosley in 2010.

“I’m not in the game for just the money, I’m in the game to be a legend. And to give the fans and media all around the world exciting fights,”

Maybe it was because those older guys were his contemporaries and the youngsters he took on this year are still trying to find their way. Regardless, he routinely praised his young challengers and even after he whooped them, he played it cool, continuing to build them up and understanding that maybe, just maybe, one of his roles in the sport of boxing now is to be an ambassador and not simply out for self. To me, that's pretty damn cool.

Floyd may never be universally loved until he retires and time allows people to fully grasp his contribution to the sport of boxing. That's simply how it goes in the world of sports for athletes who are polarizing and lightning rods in the eyes of the public. Until then, he will continue to get these wins and get this money...and be cool as all hell while doing so.