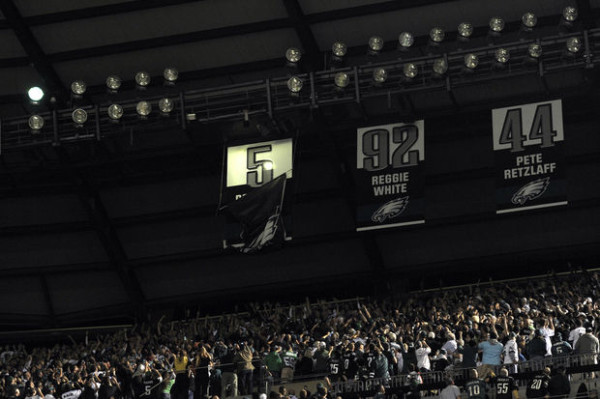 Last night, in a location that tends to make me scratch my head countless times, the Philadelphia Eagles showed me, once again, why they are appropriately called The City of Brotherly Love. See, when it comes to family, there are times when heads bump, philosophies collide and opinions vary. Your family generally wants what is best for you, but there are going to be times when all do not agree on how that should be done. When it comes to this particular topic, that's Philadelphia in a nutshell.

14 years ago, in April of 1999, the Philadelphia Eagles fans showed their team that while they were passionate about their team and wanted them to do well, they weren't thrilled about the direction their team was headed and showed it when their team announced their choice for the second pick of the 1999 NFL Draft, Donovan McNabb. However, last night showed that when all is said and done, the fans and the team have a way of coming together in a show of synergy, solitude and support that their city has a way of uniquely providing.

The first game of Week Three of the 2013 NFL season was primarily built around two things: the new-look Eagles offense and the return of Andy Reid to the team where he got his coaching start and plodded along the sidelines for 14 years. While both storylines were indeed intriguing and well worth the attention they garnered, the biggest one for me was the only mentioned as an aside: the Philadelphia Eagles were going to retire the jersey of Donovan McNabb.

On this site, there are three Donovan McNabb Apologists, three people who kiss the football ground Donovan McNabb walks on and I am one of them. He's arguably my favorite football player of all-time and is someone that, during his playing days, garnered more than enough attention through our previous TSFJ vehicle, Ed The Sports Fan. He was a player who, even when he did wrong, there would be logic to combat the myriad of cries, complaints and cuss words that were sure to fly from fans of football, regardless of their team affiliation. McNabb was not a player who did a lot of talking; he preferred to do his on the field and let the powers-that-be do their jobs as the voice of the franchise, and while McNabb is not that way in retirement (he is much more vocal in his brief retirement stint than he ever was as a player, at least publicly), it doesn't change the impact he had on my development and journey as a sports fan.

Through the times on this channel, the ETSF family has done our part to bring a Donovan McNabb narrative to the masses that simply has not been available through other forms of media consumption. There was a tale of unappreciation, as well as a plea for help. Whether it was daring the Eagles to trade McNabb to them actually doing it, then attempting to move on, only to realize they were suffering through The Ghost of Donovan McNabb's Past, the Eagles, their fans and anyone invested in the success and failure of the Eagles have been on a rollercoaster ride that is truly one-of-a-kind.

Donovan McNabb has arguably had the biggest impact on this site that an athlete has had in the five years of its existence (3+ years on ETSF and coming up on two years on this site). He had us pondering if being a fan of a player makes them a bandwagoner, or the conflicted feelings that come with being a fan of a player but hating the team, and if a star player never winning a ring makes their career incomplete. While there were other players who were involved in these topics as well, anytime these topics were brought to the light, McNabb was usually the first or second player who came up.

That's why last night's halftime display by the Philadelphia Eagles and their fans is priceless. I imagine some of those same people in Lincoln Financial Field felt a similar way about their star quarterback year-after-year in their city. They know all about the five NFC Championship appearances and the Super Bowl berth. That is the easy part, but as is the case with the author of this piece, there was always more to ask, ponder and deliberate about when it came to the career of Donovan McNabb. He has certainly added a dimension to my sports fan experience that very few athletes have. To see the number five unveiled from the rafters seals the final chapter in my story of Donovan McNabb. It was a classy gesture by a fanbase that has received their fare share of criticism over the years, but like their star quarterback of 11 years, they are certainly more than what they appear to be on the surface.