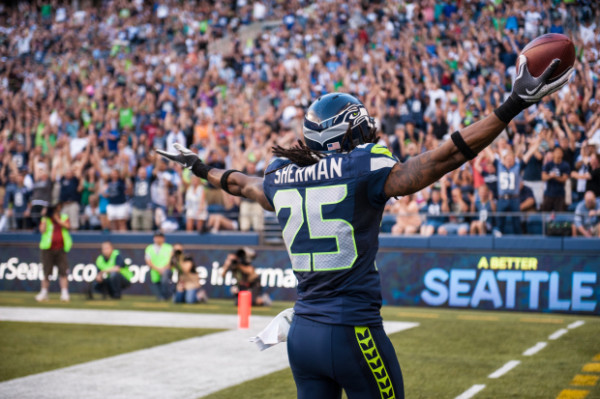 On January 11 of this year, Justin Tinsley penned a piece about a particular dread-locked defensive back and the reasons people should join his fan club. At the time, the person checking in at number five on this list was coming off of an All-Pro season in only his second season and was making the rounds to the masses to see just how much of a household name he was. Now that he is closing in on the end of his third season, along with another trip to the playoffs and one of the leaders of the Legion of Boom, there’s no doubt that if people had no clue who he was then, they damn sure know who Richard Sherman is now.

Last year featured Sherman picking off eight passes while taking one to the house and having a great time doing so. It did not matter who the receiver was. He was going to talk crazy, and in the rare instance someone got him, he would be right back to shut him down the next time around. You would think quarterbacks would have learned from last season to stay away from Sherm, but even if they have, the number of picks is exactly the same. It shows me that regardless of the attention that comes his way, his level of play continues to remain high.

With all that said, it is not simply his play that has Richard Sherman on this list. It is the impression that all Sherman needs, or wants, when it comes to the game of football is his team. The man got into it with everyone from Darrelle Revis to Skip Bayless to anyone else who had something crazy to say about his squad. When it comes to Revis, it is especially gratifying to me, because he literally showed that he did not care who Revis was, how long he’s been in the game or his raggedy island. He let him know he was coming for his spot, let the people know he was coming, and whether Revis liked it or not, that’s exactly what happened. It really is hard for me to remember that Sherman is only in his third year, because when I watch him play and speak, he does not come off as some young dude talking crazy. More so, it is as if the man has been in the league for six to seven years when, in actuality, this is only his third.

As for Bayless, look, say what you want about Skip, but he does not back down from anyone, and I was actually nervous for Sherman when I heard he was coming on the show. However, the nervousness quickly evaporated, because not only did Sherman hold his own, he did so with a confidence and bravado that extends beyond what he shows every Sunday on the field from September to January. And if the Seahawks continue to play with the level of passion, aggressiveness and smarts that they have exhibited all year, then they will be representing the NFC in February at the Super Bowl with Sherman swinging his dreads, talking crazy and leading the way like only he can.