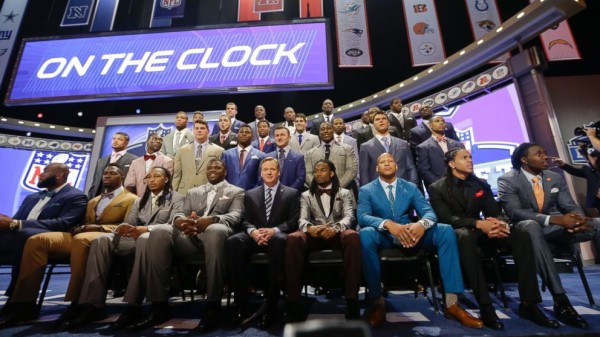 The NFL found a way to do something I did not think was possible. For as long as I have been a football fan, the NFL has been immune to the law of diminishing returns. There was no such thing as too much NFL. Even with Thursday Night Football and the criticism that comes with games on that particular night, I never think of it as too much football. It’s simply that I would rather not have football on Thursday, nothing more. This was different, though. By the time mid-March rolled around, I was over the NFL Draft coverage.

Disenchantment took over my train of thought as expert after expert paraded themselves onto the Hoshitoshi with their mock drafts and varying analysis. Anytime I turned on sports talk radio, someone was talking about the freaking draft. When I escaped TV and the radio and went to the internet to read up on the daily happenings in the world of sports, more draft coverage awaited me. I tried to escape it, but it followed me around constantly.

Any other year, it wouldn’t have been that big a deal. This year, though? Absolutely. It didn’t make things any better that The Draft was pushed from its usual mid-April start date to early May. When the move was made, it didn’t seem that bad until I realized that those extra two-three weeks meant more time to cover The Draft; more people to masquerade as know-it-alls; and more time to poke, prod and pander potential players and their possible landing pads. I hope and pray the NFL goes back to its old ways of doing things and starts The Draft in April. The lead-up to The Draft was the very definition of overkill, but the three days of The Draft itself were pretty awesome.

From the moment the first pick was announced, I was quickly reminded that there is crying allowed in football, and if there is one thing I can count on, it’s that there are players who will exhibit their sheer joy, enthusiasm and relief in being drafted through tears … and that is perfectly fine. Jadeveon Clowney, a man whose name has been dragged through the mud for the several months, showed all of the emotion of a player whose dreams became a reality once his name was called by Roger Goodell. He couldn’t stop crying even if he wanted to, and as much as I hated the four months of pre-draft coverage, I can only imagine how much Clowney hated it. To hear his name called first is vindication for all the hard work he’s put in as well as what is expected of him from here on out. It reminded me of when my favorite Dallas Cowboy of all time was drafted four years ago and the tears of joy flowed for the world to see. The same can be said when Mike Evans had his name called. As a fan, it’s awesome to see the level of work these kids put in pay off in a way that instantaneously changes their lives forever. The tears, of the crocodile variety and otherwise, are visual proof of just that.

As much as I enjoy seeing public displays of enthusiasm in the form of tears, the opposite can be said for a lack of preparation when it comes to wardrobe, and for the second year in a row, I watched a player in New York City exhibit a lack of preparation in regard to his appearance. For some people, wearing a suit at The Draft isn’t a big deal. Hell, I’d go as far as to say it is not even something people think about, but after watching Geno Smith come to day 2 of The Draft last year in a T.J. Maxx sweater and slacks, I hoped and prayed a player wouldn’t make a similar gaffe this go-round … but I was wrong.

Color me uptight, but I believe that on the biggest day of your professional life, a player should look the part. To see a player do the same thing twice, in the form of not wearing a suit to the damn draft, it left me perturbed and pissed off at Cody Latimer for walking on stage to greet Roger Goodell in a damn sweater vest with a Hanes tee underneath like he was going to the damn club and not to the damn Draft. Word on the street is the man wore a suit on Thursday and wanted to be more comfortable on Friday, but I don’t give a damn. It’s perfectly fine to wear the same suit two days in a row as long as a different shirt and tie are with the suit. For future players who plan on attending The Draft and may have to wait longer than they initially thought to be picked, wear a suit for fuck’s sake. And if you don’t get picked on the first day, be prepared to wear the same one again or get a new one. Jesus Christ.

As for what my favorite team did, the Cowboys resisted the urge to pick one of the most dynamic players in recent college football history and decided to go conservative. When Johnny Manziel slid past the eighth pick, I started to call every Dallas Cowboy fan in my phone to gauge their reactions and thought processes. From Chris Navarre to Michael Taddessee, from Justin Tinsley to Crazy Joe, their reactions varied, yet they all exhibited some sort of panic in their intonation and pitch. By the time Goodell came to the podium to announce the pick, I didn’t know what to think anymore. I simply knew I was sick, not because of the possibility of them drafting Money Manziel, but because I stopped trusting our general manager to do the right thing many moons ago. The moment came and passed, and the potential chaos in Dallas was averted for another day. We got an offensive lineman and proceeded to use seven of our remaining eight picks on defense — you know, the side of the ball we absolutely sucked at last season.

Whether it is Ed having to fend for his team drafting Blake Bortles at #3, Phillip Barnett’s Oakland Raiders making waves, or The Rev and Mark Trible’s Philadelphia Eagles draft class consisting of players who all graduated from college, each fan should be able to come away with something from this draft. Hell, the intrigue of the last day alone with no signs of A.J. McCarron, Aaron Murray and Tahj Boyd, three college quarterbacks with decorated careers who had yet to be picked, lingered in the atmosphere. With that said, if there’s one thing we can all agree on, it’s that The Draft needs to go back to its regularly scheduled time.