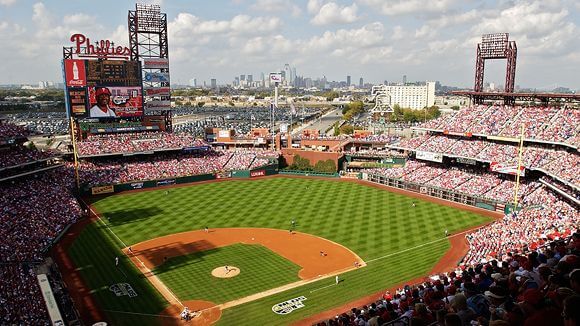 When you think of Philadelphia, several things come to mind: the Liberty Bell, the Declaration of Independence, boorish behavior and crime, just to name a few. One word that is very rarely associated with Philadelphia is beauty. And for the majority of my life, the baseball team (and football team) played in a stadium that I'm 100 percent certain has never been called beautiful.

Veteran's Stadium was a dump, plain and simple. It was our dump, a dump I absolutely loved and spent countless time in during my childhood. But a dump nonetheless. And the baseball teams that called the Vet home, with the exception of that unpredictable run to the World Series in 1993, fit the park perfectly. The Phillies were perennial losers.

Then in 2004, a year after making a splash by signing free agent slugger Jim Thome, the Phillies moved across the parking lot to a brand-new, state-of-the-art ballpark designed by the geniuses who built the stunningly beautiful Camden Yards in Baltimore, and going to the ballpark in Philadelphia has never been the same.

Stadium's History (B+)
I know, I know, Citizens Bank Park is only now in its 8th season of use, so such a high grade may seem out of the ordinary. But that's because this stadium has brought with it an extraordinary era for the losingest franchise in North American sports history. 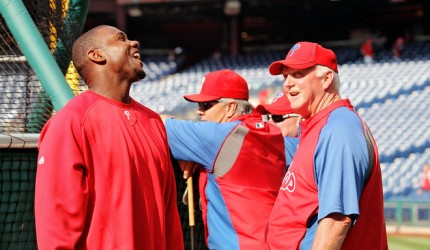 The first few seasons saw the Phillies go from afterthought to fringe contenders who became respectable and had opportunities to become a playoff team. And while they came up short, the Phillies started to win more games and along with the new ballpark, generated excitement that had been virtually nonexistent for more than a decade.

Then in 2007, the Phillies rode a red-hot September coupled with an historic skid by the Mets and clinched the NL East title on the final day of the season in Citizens Bank Park, with Brett Myers — in his newfound role as closer — unforgettably tossing his glove up in the air in celebration. Little did we know that that would be the start of something beautiful.

Since, all the Phillies have done is become National League powers and are in the midst of the greatest run in franchise history — all in the new ballpark. They won a World Series in Citizens Bank Park in 2008, ending a painful 25-year championship drought in the city, the longest for any city with a franchise in all four major North American sports.

In that same World Series, Citizens Bank Park held the first-ever weather-interrupted game in WS history, with Game Five starting on a Monday and ending on a Wednesday thanks to Mother Nature wreaking havoc.

With the rain pouring down and the field drenched in puddles, the game was postponed after the Tampa Bay Rays tied the game in the top of the 6th, and it didn't resume until two days later, making for the oddest clinching game in World Series history — a game that will forever be etched in Phillies lore by Harry Kalas's majestic call of Brad Lidge striking out Eric Hinkse for the final out, proclaiming the Philadelphia Phillies the "World Champions of Baseball!"

More history has been made since. In 2009, Citizens Bank Park hosted another World Series, and just last season, Roy Halladay threw a no-hitter in his first-ever postseason start right in this ballpark. So while the history may be short, it's been rich already. And that doesn't even include the Mike Schmidt, Richie Asburn, Robin Roberts, Steve Carlton and Connie Mack statues, not to mention the Phillies Wall of Fame out in centerfield.

For a ballpark that has only been around since 2004, it already has a lifetime of history.

Aesthetics (A)
Talk about night and day. The Vet was a cookie-cutter dump with injury-inducing astro-turf and nothing but concrete and hideous colors. CBP couldn't be farther from that. While it's still in an area of South Philadelphia devoid of tourist attractions beyond the sports complex itself, the stadium is a modern marvel. From the largest HD scoreboard in baseball to the double-decker bullpen where fans can interact with the pitchers, it's a thing of beauty.

The grass is always perfectly manicured, the open end allowing you to see downtown Philadelphia. The wall in centerfield — which Ryan Howard has somehow hit a few balls over — with the ivy growing on it. The electronic Liberty Bell. Ashburn Alley out in centerfield. Bull's Barbecue out near right. Walk around Citizens Bank Park and you can't help but enjoy yourself. There's something to do for just about everyone, from the jungle-gym/slide for kids, to the vast array of eateries and brews for adults. On a sunny day in Philadelphia, there are few places you'd rather be.

Atmosphere (A+)
I'm not going to lie, when the ballpark first opened I was extremely annoyed. When the Phillies were routinely losing, you could basically buy the cheap general admission tickets and sit anywhere you wanted at the Vet. I used to routinely go down with a large group of friends, buy tickets at the gate (or from scalpers) and we could easily all sit together.

All of a sudden, the ballpark was full, tickets were harder to come by together and people seemed more interested in eating food than watching the game. I wasn't happy about it, wondering where all these people were before.

But a funny thing has happened since. People may have come for the novelty of the new park, but they've never left. Citizens Bank Park sells out literally every game, with only standing-room-only tickets left for most games. I'm not entirely sure what the sellout streak is now, but it's well over 100 games and counting. And these aren't your curious, fair-weathered fans anymore.

With every pitch, you can feel the tension in the stadium. At times, you can almost sense an opposing pitcher wilting under the pressure of the stadium, you can feel the home team get energy from the crowd. Because of the atmosphere at Citizens Bank Park, players now want to come and play for the Phillies, something that seemed like it would never happen years ago.

But not anymore, because the atmosphere in the stadium is one of the most unique atmospheres there is. I'm sure there are places with even more aura and more atmosphere — Wrigley and Fenway come immediately to mind — but that doesn't take away from an experience in CBP. Hell, that atmosphere was a major reason Cliff Lee decided to come back. That's enough reason to give it an A+ right there.

Overall (A)
Honestly, right now there may not be a single better experience in the City of Brotherly Love than taking in a baseball game, and it's really all because of Citizens Bank Park and the team it's helped usher in. Now everywhere you turn, you see Phillies red in this city, and the place to be is at the ballpark.

The boorish, drunken behavior can still be found, but CBP truly has become a family-friendly place. The food choices are many and fantastic — from Tony Luke's to Planet Hoagie to Bull's Barbecue to the Schmidter to Harry the K's to McFadden's to just your typical hot dog and beer.

I've lived in or around Philadelphia my entire life. I've experienced a large majority of what this city has to offer. And honestly, there's nothing quite like taking in a game at Citizens Bank Park. It really has helped turn Philadelphia into a baseball town.