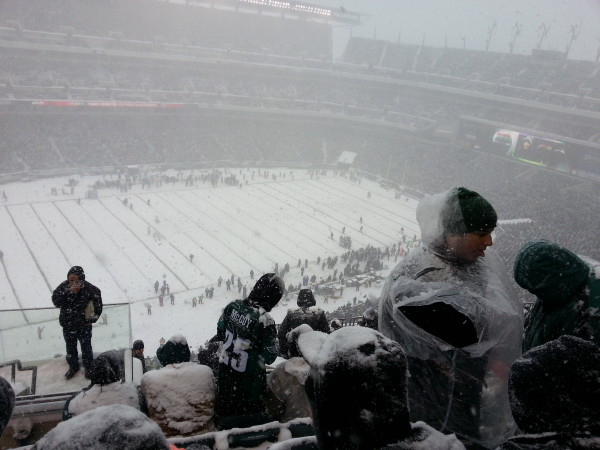 On November 11, a friend asked if I’d be interested in attending the game between the Philadelphia Eagles and the Detroit Lions. It was a no-brainer. Once a year, I see my beloved Philadelphia Eagles play in person. My scheduled attendance was for the Chicago game on December 22.

Why not two games?

I monitored the weather all last week, stuck in limbo. The snow would start at my home in Virginia on Sunday morning and then turn to ice. It would start in Philadelphia around kickoff. An inch or two doesn’t seem like much to those who’ve never sat in a parking lot or the I-95 corridor with three major cities en route.

No option of a Sunday start time made any sense. I left Saturday night in my Honda Accord. After I heard the completion of Michigan State’s upset win over Ohio State, I fretted over the trip back on Sunday. I knew it would be a mess. Telephone calls went out to every friend in the northern Virginia, Baltimore and Philadelphia areas. I might need a place to crash, I said. I have no plans, I reiterated. I will figure it out when I get to my car after the game, I explained.

At 2:30 a.m. Sunday morning, I found myself at a friend’s home in Hatboro, PA. Less than six hours later, I was awake and ready to drive to Lincoln Financial Field.

Since my initial check of the weather last week, I was excited. Through more than 20 years of attending football games, I’d never seen one in the snow. Rain, plenty of times. Heat, even more. Cold, windy and freezing, more than I can count. Snow would be a new experience.

I parked in Franklin Delano Roosevelt Park across Broad St. from the stadium. I walked for what felt like miles to my friends’ tailgate. It started to snow. We found this amusing, like kids who see it out the window for the first time of the winter. It’s snow and it’s football and it’s America, we said. It was picturesque.

Then, things went from cool to cold. It snowed hard. We could barely see the field. The jumbotron looked like Madden replays.

“Fumble the snap” was repeated before every Lions offensive play. They fumbled plenty.

When Detroit took an 8-0 lead, the game seemed over. I cover high school football. It was worse than high school football. Passing seemed impossible. Running didn’t seem any easier. The kicks and incompletions would stick in the snow and disappear. Unless you watched a ref toss a flag, you had no clue there was a penalty.

Midway through the first quarter, my three pairs of socks were soaked. My jeans and Nike long underwear were soaked. Flocks of people huddled in the heated restroom as they smoked cigarettes and checked their phones. A quick glance at I-95 from the stadium made me swallow hard. Everything was stopped. Nothing would change.

Detroit’s 14-0 lead felt like a death sentence. People began to leave. I thought about following their lead. A long drive would be even longer. Maybe it was best to endure several hours in traffic just to get home safely.

Then, the snow let up. Suddenly, the Eagles completed passes. They cut the deficit to 14-6. It felt like they won the Super Bowl. Hope returned.

A team that looked like it would never get another first down in franchise history finally broke through. Then, the Eagles just kept breaking through.

After they tied things at 14-14, it was a new game. Jeremy Ross’ 98-yard kickoff return touchdown deflated us again. Even after the Lions called timeout to clear a spot for an extra point – yes, this happened – and the birds blocked it, it still seemed our team missed its chance. 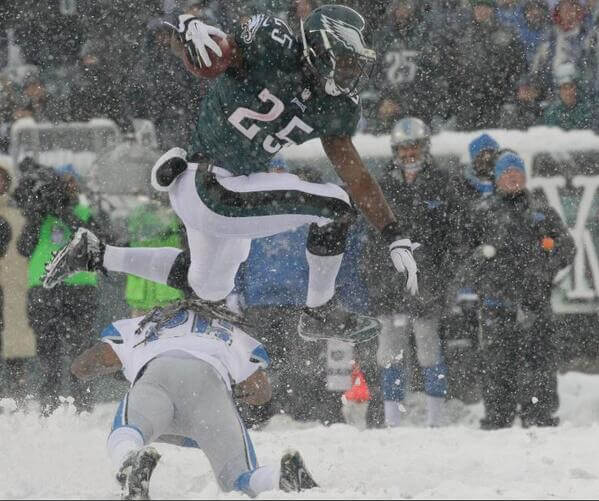 That was before we realized LeSean McCoy can do in the snow what most men can’t do in a dome. Dashing through the snow, on inside zone read plays, over the Lions he went, we screamed all the way.

It turned into a party. The feet I seriously worried about for a case of frostbite became warm. Everything was warm. Even the French couple in front of us who needed clarification on what 3rd-and-6 meant was warm. Kyle and Meg – the couple next to me who I kept bumping into and will never see again – were warm. We were all warm, we were all celebrating and we were all justified.

Snowballs rained down all over the stadium. It was hard to look anywhere for a given moment and not see one fly towards the field. The people left in the stands were welcome to do as they pleased. After all, they stuck out the wild storm just to see their favorite team play a full 60 minutes.

The party ended at triple zeros. I walked to my car. It took a while to find it. After I cleaned the inches off, I sat and tried to figure out what to do. Cross-country skiers moved briskly past the car, making the most of the weather. After an hour in my car, I drove to a friend’s home a mere mile away.

At 8:30 p.m., I chanced a drive home. Despite more than 25 abandoned cars – one slammed into a guardrail with its driver’s door left open – I encountered no real problem. After midnight, I arrived home.

The wild first snow game witnessed felt so long ago. When I watch games in person, it almost feels as though the game never happened. I’m so accustomed to viewing on television that any change in that ritual seems foreign. I called friends and family all the way home to describe the experience.

There was a time midway through that third quarter when I knew I needed to go home. I knew I was too cold, and I knew miles of stuck traffic were ahead. I knew the Eagles would lose, and for the first time in a while, that was the least of my worries.

I didn’t think they would. I was resigned to a loss. If there are football gods, they decided to smile on me. McCoy broke the single-game franchise rushing record. I sang the fight song at the top of my lungs. Myself and the remaining friends – who at this point I felt were similar to war veterans – enjoyed the end of a beatdown against a likely playoff team. At this point in the season, we’d all longed to see a game like it.

There are no words to describe how proud I was that I didn't quit or that the team didn't quit either. The going got tough and the 2013-14 Eagles got going. This is a special team to watch. They're fun, they're united and, at this point, I believe they're pretty damn good.

The snow made no difference anymore. Nothing mattered but the final score. There are times when being a fan simply hurts or takes away from quality of life. Sunday, the opposite occurred. Until the end of time, I can tell Eagles fans I was at the Snow Bowl.

I stood there. I moved constantly to create warmth. The relentless snow didn’t beat me, and the Lions didn’t beat the Eagles. There was justice in the stands for the home fans. They won out. Those watching on television, who saw pictures of Calvin Johnson’s snow-covered visor – or read about the conditions – will never know how hard it snowed at that game.

I will know, and I will remember. I will tell the story, and I will dramatize. I was there, and many weren’t. I stayed, and many left.

The value of a good story is higher than that of a great football game.