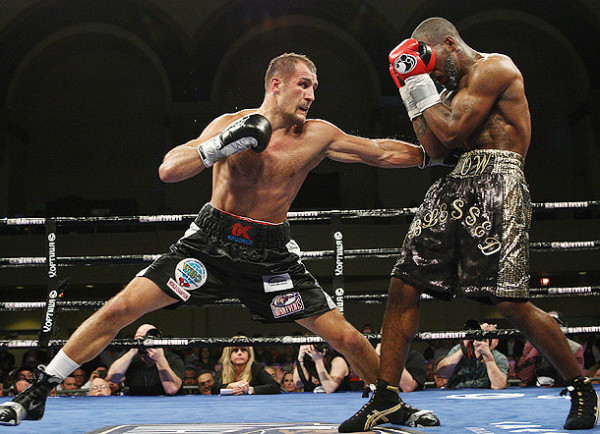 Sergey “The Krusher” Kovalev 23-0-1 (21 KO) is everything that his countryman, President Vladimir Putin, wishes he was. Putin puts on elaborate, bare-chested photo shoots in the woods in an attempt to convince his constituents and the world that he yields as much power in his bare hands as he does with all the nukes in Russia. It hasn’t worked for him yet. But if you tuned in to HBO's  most recent edition of “Boxing After Dark,” you would have seen the WBO Light Heavyweight Champion add another power-affirming knockout to his résumé. This Russian didn’t even need the token bear in the background to prove that he’s got the goods to shake up the (boxing) world.

Kovalev's opponent, Cedric Agnew 26-0 (13 KO), was a relative unknown from the Windy City, but a guy with enough amateur pedigree and professional experience to offer fight fans a reasonable question of mystery as to what would happen after the opening bell rang. Agnew proved fairly early that he was a cut above Kovalev’s usual prey.

Agnew showed a disciplined high guard and an ability to rotate away from the ropes that were telling of his amateur background. But it was ultimately his chin that kept him in the fight. He spent far too many minutes shuffling around the ring taking thudding shots on his arms, gloves and through the holes of his guard. After the second round, his punch output dropped dangerously low and made it seem as if the victory he was going for was not getting knocked out and not one on the judges' scorecards.

Having a low punch output and waiting around for the 12th-round bell to ring is a recipe for disaster against the Krusher — one that manifested itself in the seventh round. And it was created by a left-hand jab to the body — something many people aren't use to seeing cause knockouts.

Only a week ago, this victory would have brought fight fans one step closer to a super fight between Kovalev and Adonis “Superman” Stevenson, but after Stevenson signed with Al Haymon and defected to Showtime, fight fans the world over are now left wondering what realistic challenge remains for the Russian wrecking machine. The most exciting and significant fight would undoubtedly be against pound-for-pound standout Andre Ward 27-0-0 (14 KO), who is only seven pounds lighter and a Super-Middleweight title holder. But issues between Ward and his promoter, Dan Goossen, as well as Ward’s (likely) own understandable reluctance to enter a new weight class against a beast like Kovalev, are likely to keep that fight from happening in the near future. That’s especially sad because of all the other available candidates for Kovalev’s next fight, no one is likely going to be able to expose two weaknesses that Agnew seemed to occasionally capitalize on: (1) the counter over Kovalev’s sometimes slow jab and (2) a susceptibility to the counter left hook.

The other titlists in Kovalev’s weight class aren’t likely to be next either. Bernard Hopkins (IBF Champion), Beibut Shumenov (WBA Champion) and Stevenson (WBC Champion) are all committed to Showtime for the foreseeable future. Thus, Kovalev will likely have to settle for a top-tier contender. Maybe a renewed Jean Pascal could pose a challenge and simultaneously bring in a bigger payday than what the small names who have recently fought Kovalev have brought to the table. If not Pascal, it will either be one of the unknowns in the top 20 or one of the flashier but war-worn names that have tasted defeat too recently and/or too often to offer much more than a warm body to help the Krusher build up his highlight reel.

But let's be honest, when you get a guy who is hungry to make a splash, who loves pushing his opponents against the ropes with hard, well-chosen punches and, above all else, produces knockouts, sometimes a warm body is all you need to fill a show while you wait for the fight that can make him a star.