Unlike a lot of Bay Area natives, I didn’t grow up here loving the Golden State Warriors. I don’t have memories of that team other than them being pretty terrible. So admittedly, I am a bandwagon fan as of the last several years.

However, my love for Oakland started decades ago after I crossed the Bay Bridge from San Francisco looking for a place to call home that wasn’t going to cost me my first born. Believe it or not, this side of the Bay actually used to be affordable with a one bedroom going for less than $500 a month. Oakland was the best kept secret and the most misunderstood.

The Warriors played where families had put down roots for many generations. Oakland, also known as The Town, really had that small neighborhood vibe that you didn’t feel on the other side of the Bay. The people were more welcoming and the weather was a lot warmer. Yet, for those folks who had never been here, all they knew about Oakland is what they saw sensationalized on the news. That it was a place riddled with crime, violence, poverty and those infamous car side shows.

As the years went by, the Town’s reputation evolved and matured into a place folks no longer feared. You couldn’t get an apartment for cheap, but you could still get $7 Warriors tickets in the nose bleed seats… well, that is until the team got good.

In 2015, I surprised my five-year-old by taking him to his first Warriors game for $100 in the lower level seats. It was the last time we would sit at the Oracle Arena for that price because that year the Warriors won their first championship in 40 years, so of course their stock went up.

My son isn’t a bandwagon fan like me. He doesn’t know what it’s like to miss the playoffs year after year. He can’t comprehend not having your team’s best player be voted the league’s MVP two years in a row, unanimously winning one. He doesn’t know what it’s like to not see your team’s favorite players go to the All Star Game every year. He’s a real fan. And through his eyes, I grew to love them, too, along with my love for the town they grew up in.

So as this season began to wind down, we were having a hard time processing how we would say goodbye to a place that has brought us so many happy memories filled with cheers, high fives, and overall joy and excitement. But I decided that the only way to properly bid farewell would be to surprise him again with a ticket to the last game ever at the Oracle Arena; Game 6 of the NBA Finals, where it was win or go home.

For the first 10 minutes, he wouldn’t stop screaming, “Look how close we are! Look how big they look!” Yet, as the final seconds ticked away, I saw the tears welling up in his eyes as he tried to cover them with the commemorative towel given to us at the door. The look of disappointment as the Warriors were getting ready to lose the championship.

I rattled off in his ear a few things like the Warriors had a great season: Klay Thompson got hurt in the 3rd quarter and never came back, Stephen Curry missed that 3-pointer at the end, and the Raptors played really well… but at least we got to watch a NBA championship game for the last time at Oracle. A look of acceptance came over his face where it looked like he realized the moment.

A couple of Raptors fans saw him standing to the side with his Town jersey and hat on, came over to shake his hand and said, “Hey man, good game.”

We stayed until security kicked us out. When we got outside we stopped and stared at the building lit up in Warriors colors, the stairs draped in yellow carpet, with a sign that says “Strength in Numbers.” ‘Roracle’ is a building that put Oakland on the map, minimized its misconceptions and helped to shine the light on all of the Town’s true beauty.

Warriors Basketball In ‘The Town’: We’re Hella Going To Miss You 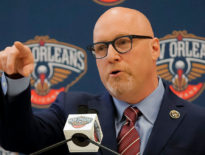 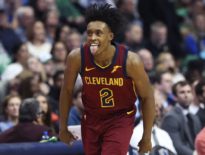