Growing up in San Francisco as a diehard 49ers fan, there are certain moments in the franchise’s history that are etched in memory, like their two back-to-back Super Bowl wins in the late 80s, their last Super Bowl win from the 1994 season (’95 playoffs) or the time Joe Montana left to go play for the Kansas City Chiefs. Just as significant as those moments were for me, the first time I watched Colin Kaepernick step onto the field at Candlestick Park will stand out the most.

I remember his debut on November 11th, 2012, against the St. Louis Rams in the second half of the game like it was yesterday. After starting QB Alex Smith sustained what ended up being a concussion, Kaepernick went in for him and the first thing I yelled at the TV was, “great! We’re not going to be able to win the game with THIS guy!” It turned out I was right. Two missed field goal attempts from both teams and a bunch of penalties later, the game ended in overtime with a tie.

The next week in a Monday night game against the Chicago Bears, Kaepernick managed to win me over with his first career start as he passed for 243 yards and two touchdowns, beating the Bears 32-7 and hence creating a quarterback controversy.

It wouldn’t be the last time he was at the center of something controversial, but never would I have thought he would be a few years shy of becoming this century’s version of Muhammad Ali. In these last three years, Kaepernick has transformed himself with his fearless and exemplary contribution to today’s social and political discourse, a way that carries way more weight than anything he would or could’ve ever done on the football field.

Yet, unlike Ali, it appears that Kaepernick may have received some kind of reparations for the amount of time he has been forced to stay off the field. On February 15th, it was announced that Kaepernick, along with former teammate Eric Reid, received a settlement from the NFL as a resolution to their complaint filed in October 2016 which claimed that the team owners colluded to keep both men out of the league.

However, of all the commentary surrounding Kaepernick, some of the most curious came from former NBA commissioner David Stern. On an appearance on Bloomberg’s Business of Sports podcast, Stern said that if Kaepernick had just been suspended by the NFL, he would still be playing in the league. Looking back from the start of his tenure with the NBA, Stern reflected, that “as we were digging out of what was a terrible hole for us in the late 70’s and 80’s when there was a fair amount of racism exhibited about our players, we felt as a matter of policy, we had to promote our stars, promote our players and show that they were real people.”

Of course, Stern’s recollection of the way the NBA handled players’ stance on social issues seems a bit skewed and contradictory. Just last year, he told TMZ Sports that he thought Roger Goodell was doing a great job handling the anthem protests. “I think every league needs rules to handle every situation. I don’t know what rule I would implement, but there should be a rule that treats everyone fairly and uniformly,” he added.

In 1998, Mahmoud Abdul-Rauf’s NBA career was cut short at the age of 29 when he refused to stand for the national anthem because he believes it represents tyranny and oppression. He was reprimanded by the NBA and consequently pushed out of the league. Craig Hodges saw the same fate as he was blackballed from the NBA after being vocal about social justice issues. I would argue that both players were still at the top of their NBA careers and could’ve had a few more years left to impact the game. (Hmmm… sound familiar?) Evidence of this can be seen today with the fact that no one has managed to break Hodges’ All-Star 3-point contest record, while Abdul-Rauf is still showing off his athletic prowess in Ice Cube’s BIG3 basketball league.

So if what Stern said about having a rule that’s fair to all players is really how he feels, then maybe while under his watch, the NBA should have allowed their resident activists to peacefully protest as nothing they did was in any way disrespectful to the league. Because remember, according to Stern’s most recent account of history, the league wanted to highlight the humanity in their players.

“His statement is painfully laughable,” Abdul-Rauf told TSFJ. “You have people like Craig Hodges and myself who took positions and I still haven’t been offered a job in the NBA. Not that I would take it, but my point is nobody ever called me. At the minimum, they could at least invite Hodges every year for the 3-point contest (during All-Star weekend) until somebody breaks his record. This is my problem, you say one thing but on the ground you see something different.”

In the spirit of knowing our Black History, what we fail to acknowledge in our past we are doomed to repeat.

“David Stern cannot go back now and do a re-write by claiming judicious and equitable management of either Hodges or Mahmoud any more than the boxing associations of the late 1960s can claim that with Ali, or the US Olympic and International Committees can claim that with (Tommie) Smith and (John) Carlos,” added Olympic Project for Human Rights Founder and sociology professor, Dr. Harry Edwards.

What does the settlement made for Kaepernick and Reid mean for this wave of athlete activism moving forward? We should acknowledge that athletes are not just sports figures. They have the right to use their platform to speak out against social injustice.  If their employment is taken away because of it, they have the right to be compensated. This settlement is proof that a precedence has been set and that’s a piece of history we won’t be able to rewrite. 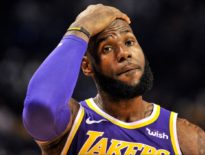 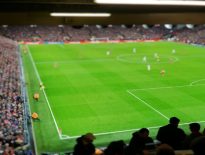