What good is a series without a trilogy? For the third time, The Sports Fan Journal heads on the NBA Journey. For the first two years, we had a level of surety as to where our destination would be. In the first year, we were correct. The second, we were correct in location, but not in victor, as the Toronto Raptors won the title last year. Now, the NBA springs anew and for the first time in a while, we’re not totally sure where our destination lies. This allows for a current kind of exploration. Let’s continue with our next installment after a week of games.

Song of The Week: Final Fantasy X Soundtrack – “At The End of The Abyss”

Strategy is a major component of video games. Most situations have multiple ways to overcome them and achieve victory. Game developers program levels in a way for players to use what they’ve learned so far to offer a challenge that increases as skill increases. But sometimes, a player’s understanding of a game helps bypass the grind of a game or boss fight and take out any drama.

For example, in Final Fantasy X, one of the status ailments that can be afflicted is zombie. This means that the character becomes undead, turning healing items into damage. Well, if a player encounters an undead enemy, they could attack with weapons and magic as intended. Or they could use a Phoenix Down — the item that resurrects fallen characters — to instantly defeat the enemy, regardless of the amount of health. Sure, it takes away the tension of battle. But that comes from such an advanced knowledge of the game that the player becomes so creative that they make it easy on themselves.

“Masters simplify everything.” This is something Tracey Mills said on the No Chill Podcast recently. The better we get at something, the easier it is for us to simply explain and simply excel in.

Not only is Harden scoring at a historic rate, but his mastery rivals those remarkable seasons from the greats of yesteryear. Scoring is a barometer for measuring one’s individual greatness, in hoops or in gaming. Just as we once envied the best arcade players or currently stand in awe at the mavens of esports, we marvel at Kobe’s 81-point game, Jordan’s 63 at the Boston Garden, and Wilt’s fabled 100-point game. Those who score at a high clip are often revered, even considered icons in the game of basketball.

While some big-time scorers are held in high regard, the celebratory narrative tends to change when it involves Harden. Harden the best scorer in the NBA, and it’s not even close. Harden may not have elite athletic ability, and he may not be the sport’s greatest all-time three-point shooter, but no one can deny the obvious — he can’t be stopped. While some complain about the way he plays, it’s intriguing to see defenses attempt to stop Harden — keyword, “attempt.” For every team that schemes to stop Harden, he counters them as if he is Dean Malenko in the squared circle.

When it comes to the greatest scorers in NBA history, Harden belongs in that conversation. To place the bearded wonder in the same scoring hierarchy that includes Wilt Chamberlain, Kevin Durant, Kobe Bryant, LeBron James, and Michael Jordan is not as asinine as one would think.

Since being traded to Houston in 2012, he’s been a walking bucket averaging north of 25 points per game. Depending on who you talk to, Harden should be on a four-year MVP run, but during that time he won just one trophy in 2018. While the points come with ease, Harden draws more criticism than praise. For every 40- or 50-point game, there are qualms about the number of free throws he shoots or how many dribbles it takes him to get his shot off. His eccentric, ball-dominant ways coupled with his penchant for flopping, are frowned upon by most. And while his loudest detractors harp on shortcomings in the postseason, his scoring proclivity has been nothing short of brilliant.

Through 14 contests, Harden is averaging 40 points per game… well 39.5 to be exact, which is about nine more points higher than reigning MVP Giannis Antetokounmpo (30.9) and Washington’s Bradley Beal (30.1). Since Nov. 4th, he is averaging 42.1 points per game. And in the first seven games of the team’s current eight-game winning streak, The Beard had averaged 43 points per game, which was the most in a seven-game stretch since Wilt Chamberlain in 1962-63. Harden is also dishing out 7.6 assists per game and he’s pulling down 5.6 rebounds a night.

To dive deeper into the numbers, Harden is scoring 19.7 in the first half of games and 19.8 in the second, which includes him averaging 12 points in the 4th quarter alone. He has already been to the foul line over 200 times, which is Shaq-like given the number of games that have been played. One of the most intriguing factors in Harden’s scoring splash is that his field goal percentage both from beyond the arc and from two-point range is lower than usual. Despite the fact he is averaging an insane amount of points, he has yet to hit his full stride which is frightening.

The way he approaches the game may seem cheesy, but no one can argue with the results. (NBC Sports)

Through rigorous repetition, he has simplified his strategy to three moves and two areas of the court. The goal is not just refreshment, it’s winning. All the great scorers as previously mentioned, while they may have a ton of moves, rely on a couple to go-to’s in most situations. Harden makes basketball look easy in a different way. Yes, he’s certainly talented enough to use the whole court. But if this strategy has led to the best seasons of his career, the strategy is working.

People may say that they’ve seen this movie before. Harden cooks opponents in the regular season, yet his dominance Euro-steps away from him in the postseason. While that may be the popular opinion, it’s important to celebrate or at least recognize the historical spectacle each night, whether you like James Harden or not.

Return to the NBA Journey, Week Four: Via Puirfico 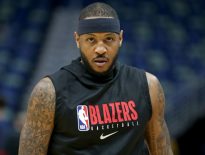 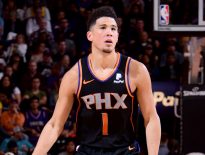