This post is inspired by Paul George’s dunk on Giannis Antetokounmpo. Antetokounmpo, 24, passed away on a melancholy Sunday evening in Oklahoma City, Oklahoma on January 27, 2019. He was born on December 6, 1994, in Athens, Greece. Known as The Greek Freak by many, he established himself as one of the rising stars in the NBA. This season, he was an MVP candidate and until the fateful day, where he met George at the rim, Antetokounmpo lived a life that was full of promise, triumph and bliss.

The guy who ended the ascendency of Antetokounmpo was Paul George. The play of George this season has been simply astounding, as now you will find bookies offering odds as the Thunder star as a MVP candidate. Moreover, George’s affinity to climb the stairway to heaven has been magical to watch, but doesn’t get mentioned in that regard like he should.

Several collection plates have been passed around arenas throughout the NBA due to George’s thunderous posters.

Let’s take a gander at some of PG-13’s best work during his illustrious career.

George and LeBron James’ playoff battles were instant classics. The King’s Miami Heat team ended up defeating the Indiana Pacers in three straight series, but in those games, there were some unforgettable moments. Here is one as George lets LeBron know that he arrived as one of the top players in the league.

Birdman got his wings clipped

As mentioned, the Pacers vs. Heat playoff series were lit as the youngsters would say. Chris “Birdman” Andersen, who was known as an elite shot-blocker, found out first hand that George plays no games when it comes to doing the Lord’s work.

PG does it for Kawhi

Zaza Pachulia is known as a dirty player across the NBA. His sly move on Kawhi Leonard ended what would have been an epic playoff series. That said, I’m certain when Leonard saw this dunk, he let off his egregious laugh.

When PG took off, you could hear the organs in the church playing as if it was Sunday afternoon in Nap Town. Since being baptized, Clint Capela has become a model citizen and a more than formidable NBA player. Let’s thank PG for that.

PG gets angry with Derrick Favors

PG attacked the rim with a vengeance. Derrick Favors who is no slouch when it comes to protecting the rim, found out first hand that it’s not the brightest of ideas to jump when George is coming down the lane.

When Larry Sanders was at his peak, he was arguably one of the best shot blockers in the league. Apparently, George had other ideas as he put Sanders on a poster.

What’s your favorite Paul George posterization? Let us know your thoughts in the comments section! 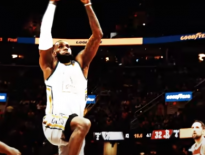 Basketball ‘More Than An Athlete’ Is More Than A …
1