The 2018 NFL Draft kicked off Thursday Night and there were many storylines that will capture the attention of NFL fans during the upcoming season. Here are 12 takeaways from last night’s event.

Saquon Barkley Will Be a Megastar in New York

Odell Beckham Jr. tweeted that Saquon Barkley will lead the league in jersey sales. Given that he is arguably the most exciting player in recent memory and he will be playing in New York (technically New Jersey, but you know what I mean) Barkley has a chance to take the league by storm. The Giants have some holes to fill on the offensive line, but the sky is the limit for Barkley in his new football home.

The Cleveland Browns Rolled the Dice

To some, the Cleveland Browns bombed their two first-round selections. Baker Mayfield was high on some draft boards, but on others, he was as low as number eleven. With Cleveland taking him as the top pick, the expectations are through the roof for the former Oklahoma Sooner. I honestly think it was a good pick because Mayfield has not only thrived against some of the top defenses in college football but with Cleveland having a new stable of weapons it gives him a legit shot to do well—unlike past Browns quarterbacks.

At pick No. 4, the Browns stayed close to home as they selected Denzel Ward from Ohio State. Ward was slated to be a top 10 pick, but nobody expected him to go as high as he did. With Bradley Chubb on the board and to have a chance to pair him with Miles Garrett, many pundits thought the pick with a head-scratching move. In a division with A.J. Green, Michael Crabtree, Juju Smith-Schuster and Antonio Brown, it doesn’t hurt to go with a defensive back. I also believe Ward has a chance to be a good player, but only time will tell.

Quenton Nelson(Colts), Mike McGlinchey (49ers), Kolton Miller(Raiders), Frank Ragnow (Lions), Billy Price (Bengals), and Isaiah Wynn (Patriots) all have a chance to be solid players but don’t tell that to the casual fan.

For the second year in a row, four ‘Bama players were taken in the first round of the NFL Draft. Things kicked off with Minkah Fitzpatrick coming off the board with 11th selection by the Miami Dolphins and Da’Ron Payne (Washington), Rashaan Evans (Titans), and Calvin Ridley (Falcons) rounded out the four players taken in round 1. To no one’s surprise, ‘Bama has an embarrassment of riches in talent that is NFL bound year after year. The 26 first-round selections in the past 10 years further prove that the talent runs deep in Tuscaloosa.

Ohio State is the Real “DB U”

We’ve been through it all. Salute to the next generation. Brothers for life. #BIA x #PilotBoys x #5StonesGroup – Coming soon! #NFLDraft #BuckeyeNation

Universities such as LSU, Miami, Florida, and Florida State often call themselves “DB U”, due to the litany of NFL players they produce at the defensive back position. To some degree, all of those schools qualify to carry the nickname, but when looking at the raw numbers, the Buckeyes are far and away the real “DB U”. Denzel Ward became the sixth DB drafted from OSU in the last five years and the 18th OSU DB to go in the first round in the draft era which is five more than any other school. As the great Shawn Carter stated, men lie, women lie, but numbers don’t and the numbers prove that OSU is a hotbed for defensive backs.

Roquan Smith Can Be the Next Great Bears LB

When thinking of Chicago Bears linebackers it’s obvious to reflect on the success that Dick Butkus, Mike Singletary, Brian Urlacher and Lance Briggs attained. Georgia’s Roquan Smith has a chance to be the next great linebacker to suit up for the Monster’s of the Midway. Smith is a backer that can play three downs and he’s a tackling machine. It will be interesting to see how things shape up for him, but as mentioned, greatness is ahead for him.

The Saints Reached for Marcus Davenport

The Saints were a heart-breaking play away from making it to the NFC Championship. That said, they aren’t far away from making a Super Bowl push in the twilight of Drew Brees’ career. After a solid outing on defense last season spearheaded by All-Pro Cameron Jordan and Defensive Rookie of the Year Marshon Lattimore, New Orleans felt as if they needed additional help on that side of the ball. UTSA’s Marcus Davenport isn’t a household name, and he can be a solid player, but trading next year’s first-round pick to move up to select him was a questionable move. For Saints fans, I hope that I’m wrong.

The NFL Running Back……Is Back

Once upon a time running backs were regarded as one of the most important pieces of a football team. Currently, that’s far from the truth as teams try to bargain looking for running backs as if they are searching for items in a consignment shop. If teams don’t have to pay top dollar for a running back they won’t do it (Just ask Le’Veon Bell). Saquon Barkley (Giants), Rashaad Penny (Seahawks), and Sony Michel (Patriots) were all taken in the first round in the NFL Draft, giving the notion that running backs are making a comeback.

The Cowboys Missed Big On Not Selecting a Wide Receiver

With the departure of Dez Bryant and little to no explosiveness at the wideout position, it was almost a given that the Cowboys were going to select a wide receiver with the 19th pick. With Alabama’s Calvin Ridley, Maryland’s D.J. Moore and SMU’s Courtland Sutton available, the Cowboys shocked everyone by selecting Leighton Vander Esch from Boise State. It remains to be seen if Vander Esch is Bobby Carpenter 2.0, but Dallas could have filed a gaping hole by selecting one of the top wide receivers.

Lamar Jackson slipped in the draft and landed in an ideal place. In Baltimore, Jackson will not only get a chance to play given that Joe Flacco is 33 years old and his lucrative contract is up soon, but he ends up in a city that will embrace him. Most importantly, Jackson lands in a place where coaches are familiar with his skillset. Offensive Coordinator Marty Mornhinweg, Assistant Head Coach Greg Roman and Quarterbacks Coach James Urban have experience coaching Michael Vick, Colin Kaepernick, and Donovan McNabb, who have similar playing styles to Jackson. He may have to sit for a year, but when he is given the keys to the offense, he has a chance to thrive.

There isn’t much to say here. Just know that the combination of Chubb and Von Miller is downright frightening.

When Ryan Shazier walked on stage to announce the Steelers pick my allergies began to flare up. The Steelers linebacker has been battling to regain his mobility after suffering a severe spine injury. His effort has been documented publicly, so it was great to see him make such great progress.

12 Takeaways From The First Round Of The 2018 NFL Draft

by Ron Hampston time to read: 4 min
Football The 10 Best Dressed Players From The First Round O… 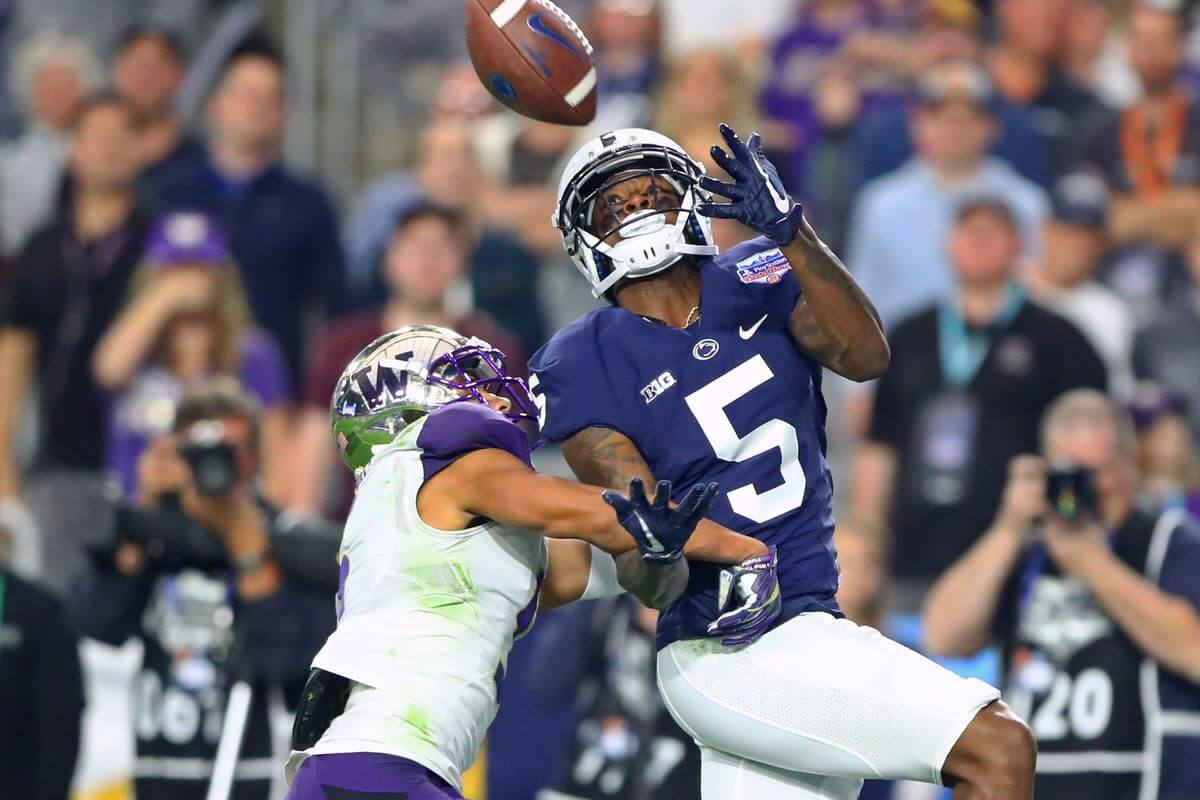