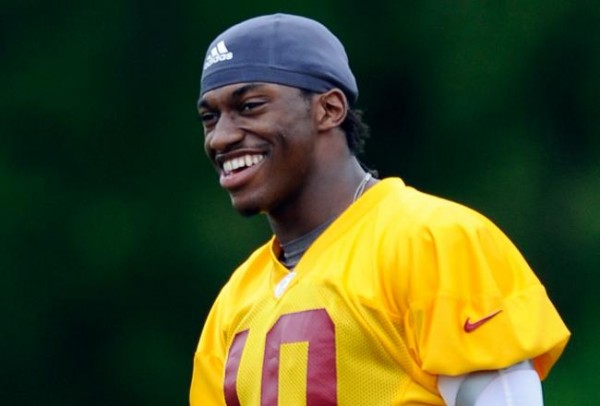 Has there been anyone as polarizing as Robert Griffin III this offseason? The man won the Heisman Trophy. He’s been on every endorsement commercial offered to players who can play the game at a high level. The man was even spotted at the Women’s Final Four this year rooting for his alma mater.

A lot of folks have been asking me how I feel about Robert Griffin III as a football player. The most important question they should be asking me is how I feel about him becoming a Redskin. Everyone that knows me knows that I am a Cowboys fan to the heart. Griffin was drafted by the team that I despise the most, and I am tormented the same way I was when the Philadelphia Eagles drafted Donovan McNabb.

The Cowboys fan in me wants him to fall on his face and fail. It’s natural that the Cowboys fan feels that way though because that part of my inner self hates everything about the Washington Redskins.

Another part of me wants him to go on and become one of the best quarterbacks in this class and be as good as any quarterback in the game. I don’t know if that side of me is rational, but what I do know is that the NFL hasn’t been shying away from the adjustment when it comes to athletic quarterbacks and participation.

When I glance across the NFL, one thing is for sure — there aren’t that many nontraditional guys starting at quarterback. It didn’t really dawn on me until someone brought it to my attention that in a league that is made up of the best athletes on the planet, the quarterback seems to be the least athletic person on most teams outside of the kickers.

Another question to consider is why do the most athletic and exciting college quarterbacks end up playing other positions in the NFL? Everyone wants to put these players in a box and make them out to be something that they aren't. No one thought that Cam Newton would be as successful as he was. People even shun on the idea of Tim Tebow playing the position. Truth is that the media influence is a big part of the viability that the position warrants.

It even happened before last year’s college football season started when Todd McShay labeled Robert Griffin III a fourth-round wide receiver at best in the NFL. In the words of McShay, “Griffin didn’t possess the qualities of a passer and that he was a run first guy.” Did Griffin ever make him eat those words?

The problem is that NFL general managers and owners listen to what guys like McShay say, and they run with it. Because the media has made quarterback play a “purist” entity, owners do not like to take chances on quarterbacks who don’t fit the traditional profile. Everyone is looking for a prototypical passer like a Marino, Montana,\ or Elway, but the reality is that there aren’t many guys out there that can do it the way those guys did.

In fact the college game has changed so much that those guys probably wouldn’t be the college coach’s first choice if there's an athletic guy who can throw with any consistency. I’ll give credit where credit is due; some teams ignore all that stuff and just roll with the guy they think can lead them.

Granted it’s always a crap-shoot, but there are more success stories than failures. The changes are coming though as you look at the quarterback position in college. The number of athletic quarterbacks continues to grow, and eventually someone is going to finally let go of that stigma.

Don’t get it twisted though. Today most NFL GMs shy away from the athletic quarterback unless they are drafting them to play another position or to run gimmick plays or the “Wildcat.”

So to answer everyone’s question, I want RGIII to be successful against everyone but the Cowboys. Even in that game, I don’t care if he has record numbers, as long as the Cowboys win. That’s right, Tony Romo is my guy!!! There isn’t anything wrong with wanting the best of both worlds.

4 Replies to “Robert Griffin III, The Athletic Quarterback, And The Future Of The NFL”