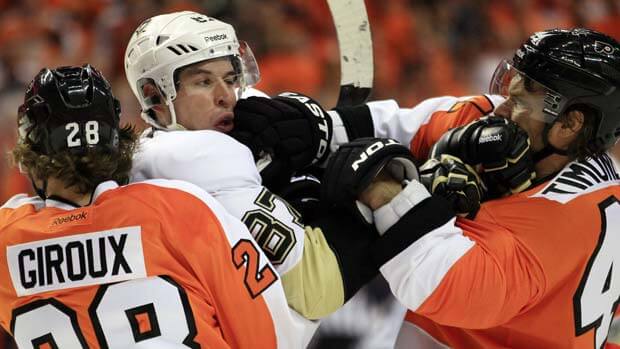 The Philadelphia Flyers host the Pittsburgh Penguins tonight in yet another installment of hockey's best rivalry. The last time these two met, the Flyers' Jakub Voracek netted a hat trick in a thrilling 6-5 victory in Pittsburgh.

These games have become must-watch affairs — fighting is mandatory, goaltending is optional and two-goal leads are really tie games. A palpable animosity drifts from the stands down through the benches and onto the ice. The two fan bases exchange caustic epithets over social media. Facebook and Twitter have rendered the five-hour drive that separates the two Pennsylvania cities obsolete.

In Philadelphia, the mayhem is especially entertaining. The sea of orange and black blends chants of “Let's go Flyers!” with ill-informed suggestions that “Crosby sucks!”

This vitriolic, somewhat ignorant display of pageantry evokes another famous rivalry I was fortunate enough to observe. In the 2012 addition of “The Big Game,” I sat beside Yale's student section as it repeatedly broke into renditions of “Harvard sucks! Harvard sucks!” I thought to myself, “If Harvard sucks” — alma mater to eight U.S. presidents, countless Nobel Prize winners, the lead singer from Weezer and Matt Damon — “what do the rest of us do?”

The Sidney Crosby version is equally baffling. It's neither funny or accurate — unlike, say, the fans serenading an early 90's Jaromir Jagr with Aerosmith's “Dude Looks Like a Lady.”

I'd assert that hate clouds the Flyers fans' judgment, but it's a special kind of hate. We more or less resent the Penguins because, ironically, Pittsburgh has sucked to get good. First, their extreme futility earned the team the number one pick in the 1984 draft. The Penguins selected Mario Lemieux, who would go on to lead the team to back-to-back Stanley Cups in 1991-92.

In the early 2000's, the franchise once again slipped into a period of ineptitude. A decrepit team in a decrepit building gave the fans little to cheer about as rumors of relocation grew louder. But from 2003 to 2006, the Pens nabbed Marc-Andre Fleury, Evgeni Malkin, Sidney Crosby and Jordan Staal, all in the top two picks of the draft. The four would go on to form the core of Pittsburgh's 2009 Cup triumph.

The Flyers, on the other hand, have rarely been bad. In 45 seasons of existence, they've made the playoffs 36 times, including 18 out of the last 19. Their all-time .578 points percentage, percentage of games the team has earned a point in, is second best behind the dynastic Montreal Canadiens.

The Flyers have played in 8 Stanley Cup finals. They've lost 6. The Penguins have played in 4. They've won 3. In short, Flyers fans are jealous. They're bad, we're good; they win, we don't.

This jealousy leads to resentment. The resentment leads to hate. Hate leads to the Dark Side.

Sometimes things happen, however, that remind us that there is indeed a fine line between orange and gold. The aforementioned Jagr became a fan favorite in Philadelphia during his one-season stint with the club in 2011-12. Current Flyer and ex-Penguin Max Talbot returned to Pittsburgh and received a standing ovation that accompanied a short highlight video of his Penguins career (his ex-teammates have been less forgiving than the fans).

Finally, there's always March 2, 1993. Twenty years ago last week, the great Lemieux* returned from his battle with Hodgkin's Lymphoma to resume his extraordinary NHL career. He stepped onto the ice at the old Spectrum to a rounding ovation from the Philadelphia crowd.

I tirelessly searched the internet for clips from that poignant moment. Alas, I found none. I can only conclude that all video evidence was destroyed because it didn't quite fit the overwhelmingly negative narrative that most people associate with Philly fans.

My point is this: We don't always hate. Amidst the anger, the fighting, the chants of "Crosby Sucks!" and the boos that accompany a bad call or a Penguins goal, there is an underlying sense of respect. It's the complexities of the rivalry that make it great, not just the violent surges of emotion.

*Lemieux would record a goal and an assist in his return game, 2 points out of his league-leading 160. That's right: Mario Lemieux led the NHL in scoring the same year he missed a quarter of the season to cancer. Your move Lance.