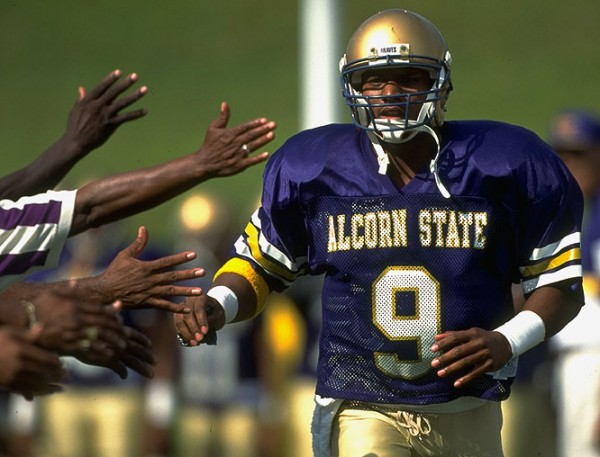 Behind Steve Young, the Hall of Fame’s only left-handed quarterback, Steve McNair was my other all-time favorite signal-caller. Those two players had so much in common in terms of styles, intelligence and absurd amounts of “you gotta KILL me to get me off this field” within. They lived the cliché of willing their teams to victory, even as tremendous physical tolls were undertaken in their careers.

The amazing part about McNair, though, was that while Young needed his record-setting performance in Super Bowl XXIX to write his own chapter in San Francisco 49ers history, McNair actually added to a legend that was born long before Kevin Dyson came up one yard short in Super Bowl XXXIV.

Quite simply, McNair was the most tenacious, gritty, relentless, resilient and toughest SOB under center of the last 20 years.

And we knew little else about him until the most harrowing of tales was told more than three years ago.

One of the hardest media endeavors to take on has to be filming a profile on an athlete, and it has to be even more difficult when that very athlete is no longer here to tell his or her story. What NFL Films and producer Chip Swain has done for “Steve McNair: A Football Life” is remarkable, all things considered.

His legacy as a man, as so many others before and many to follow, is complicated because of a personal fault that is all too common. People step out on their significant others for reasons hard for a loyal man or woman to understand. And we all know one or two people who regularly do so.

Because of that, the most appreciated aspect of Wednesday’s edition of “A Football Life” was not only that it reminded viewers that one wrong act cannot undo a lifetime of great deeds, but that he vicariously and literally entered the lives of many for a reason.

Yet, because his was a life shortened by tragedy, this edition of “A Football Life” understandably breezed by and felt incomplete.

Since he was a notoriously private person, fans around the country weren’t just shocked that he was killed, but the circumstances surrounding the his death stunned us all. Even with the knee-jerk judgments thrown upon him when details were revealed, there was a slow resignation that unlike many of his well-known peers, there was very little the public actually knew about McNair away from the field, away from his charitable efforts and away from his Alcorn State legend.

Because those circumstances are the final memory of McNair, there’s a strong desire from his greatest fans to look back on why he was so revered.

As wonderful as it was to have that one-hour show provide a glimpse back into his gridiron glory, I couldn’t help but think of some of his greatest moments that were either unmentioned or sped over. How he was actually one of those amazing rare natural athletes who was drafted in two leagues (did you know that the Seattle Mariners selected him in the 1991 draft?). That a thrilling second half of the 2003 season made the MVP race so tight and exciting that there was almost no choice but to share the award for only the second time in league history. His place in the most underrated rivalry of the 2000s between the Titans and the Baltimore Ravens.

Again, it was completely understandable that his reluctance to let people get close to him provides an unfinished portrait, even for a life cut short so tragically and suddenly. In addition, because of what happened three years ago, not having perspectives from his widow or other ex-teammates like Derrick Mason was also accepted. Maybe in some way, it speaks to a point made recently about athletes in this current era having their lives somewhat played out before they have a chance to reflect.

As a McNair fan, what will always be appreciated from “A Football Life” is that family members and former teammates, including Eddie George, added insights into who he was — probably the lowest maintenance guy of any starting NFL quarterback imaginable. A country strong boy who just wanted to fish, take naps, watch “The Price is Right,” throw for 300 yards in victory and then go home.

4 Replies to “On ‘Steve McNair: A Football Life’ And Paying A Legend Respect”

On ‘Steve McNair: A Football Life’ And Paying A Legend Respect