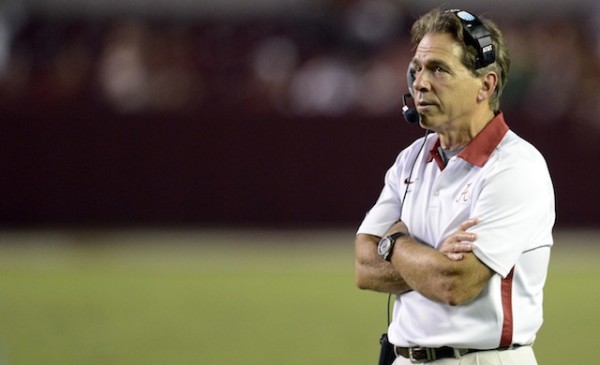 A three-peat in college football last occurred between 1944-1946 — the same stretch of time that saw the end of World War II and Dean Martin and B.B. King begin their musical careers. The always-stoic Nick Saban and Alabama have a chance to rewrite history in 2013.

Success is America's finest medicine. LeBron James completed the sort of celebrity photosynthesis that's seen him matriculate from the league's most despised player to the league's most popular following two championships, two more regular-season MVPs, two Finals MVPs and another gold medal. For all we know, the process is still-ongoing, too, as he possibly weighs a presidential run in his near future. And more Finals MVPs. And more regular-season MVPs.

T.I. is now considered one of America's most lovable TV dads and the modern-day Heathcliff Huxtable, only a handful of years removed from back-to-back prison stints for weapons possessions and probation violations.

And excluding LSU fans and Miami Dolphins fans, Nick Saban is no longer viewed under a microscope of a guy running from the challenges in the NFL. Instead, he's the single most dominant non-player in the college game's landscape. Love Saban or hate what he embodies, he is the standard for coaching in the collegiate ranks.

Steve Spurrier claimed in 2011 that for Saban to be considered the best coach of all time, he'd have to win away from Alabama. It's a double-sided coin. Where one can claim 'Bama had a history of winning and that Saban took a "safe job," the numbers speak for themselves. In the previous six seasons before Saban's arrival, Alabama's record was 43-32. The six seasons since Saban has roamed the sidelines? 68-12, a record "tainted" by his first season where the team went 7-6 — but includes national titles in 2010, 2012 and 2013.

Traveling back even further, Saban's history as a resurrection artist speaks for itself (ironic because he's often referred to as "the devil").

It's not as if Saban overstocks on talent making journeys to national championships mere walks in the park either. Like John Calipari in college basketball, he, along with the iconic stature of his university, is a top-flight recruiter. But unlike John Calipari, Saban's track record of grooming talent is well-respected in the NFL (which isn't totally fair to Cal given the fact he gets one season with his players to Saban's two, three or four). If a weak component to Saban's game both on and off the field exists, it hasn't been exploited yet. 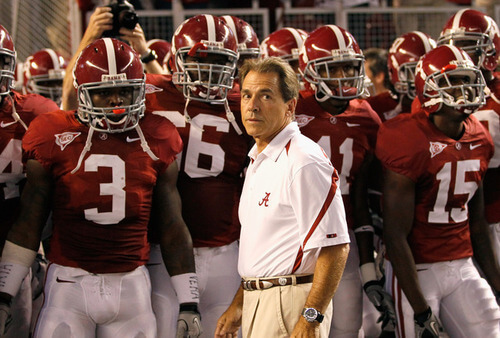 Alabama begins the season atop the preseason polls in a decision shocking absolutely no one. Saban underplays it, as he should. He'd more than likely trash this article if he ever read it, which is more than fine. That's part of the manual out on him. He never becomes too excited, even when moments call for unbridled joy. He realizes, perhaps more than any of his contemporaries, champions are never crowned in August. Yet, seeds for demigod-like expectations can be. His focus for each game will be treated as if it were the national championship because that's just how bedrock coaches operate. They realize to enjoy the meal at the end of the season, preparations, seasoning and recipes must be followed to a tee. Otherwise, the meal is screwed and a season impossible to get back is dead.

The bull's-eye is on Nick Saban and Alabama, again, shocking absolutely none who follow the sport. But Saban's own bull's-eye is on something much, much, much larger. Alabama is staring down the scope of a third consecutive national title. Bobby Bowden never did it. Joe Paterno never did it. Glenn "Pop" Warner never did it. Eddie Robinson never did it, although he did win three in four years between 1972 and 1975 and Robinson's greatness as a head coach is perhaps the most underrated legacy in the college history. Woody Hayes never did it. Bear Bryant, his Alabama Prophyte and widely considered the GOAT, never did it.

Saban's battling ghosts because, in many ways, he already is one. Bryant won six national titles and amassed one losing season in 38 campaigns at Alabama. A three-peat instantly puts Saban (with five total) on the game's Mount Rushmore. Keep in mind, a trifecta of this ilk has only manifested twice, with the last one coming in 1946 with Army.

Where other iconic coaches are remembered for four, five, six decades of service at one university, Saban doesn't paint himself as the guy who'll coach into his mid-70s or 80s. The need for 320+ victories isn't a necessity. Instead, Saban compensates in outright dominance in a world where the term "job security" is as prevalent as a positive Alex Rodriguez-related story (positive as in reporting, not tests). The coaching culture is different and more cutthroat in present days. The profession of coaching may not have changed throughout the generations, but the idea and perception of  a "grace period" certainly has.

Three-peats in college just aren't supposed to happen. Monopolies don't survive here. Not when talent shuffles on and off campus every year, creating no true sense of comfort. Not when other schools invest millions upon millions into their own facilities as well. The game isn't supposed to be dominated like this, not today.

Saban pulling off college football's triple crown only catapults an already Hall of Fame legacy to Paul Bunyan, John Henry-like proportions. The argument can be presented he doesn't need it now, but four national championships in five years, including three straight, puts him on Bryant's doorstep as the game's greatest ever. In several eyes, like these two, it'd make Saban — as Kool G Rap and Ray Stevens once coined — "#1 with a bullet." The best D1-A head coach I've ever seen because, remember, if we're agreeing Bear Bryant is the pinnacle, he died 1,103 days before I was even born.

Being a "prisoner of the moment" often afflicts how we view greatness in many forms and in many sports. Being unwilling to admit an entity in the present can be one of the sport's finest talents often falls under the same umbrella. In a sense, both hold merit. Examining the totality of the situation objectively, nevertheless, is the only method to come to any sort of reasonable conclusion. A conclusion with only one true answer.

"Love" is overused in relationships. "Classic" is overused in music. And "knocking on the doorstep of history" is overused in sports. Except with this case of Nick Saban. Because how often does a coach, a team receive the chance to do something that hasn't been accomplished since the year following the end of World War II? That's how this season is put in perspective for Alabama. We'll focus on names like Jadeveon Clowney and Johnny Manziel because they captivate us in the present, and possibly for years to come.

It's Nick Saban, however, who is the one knocking on immortality's front door. Roll Damn Time, indeed.