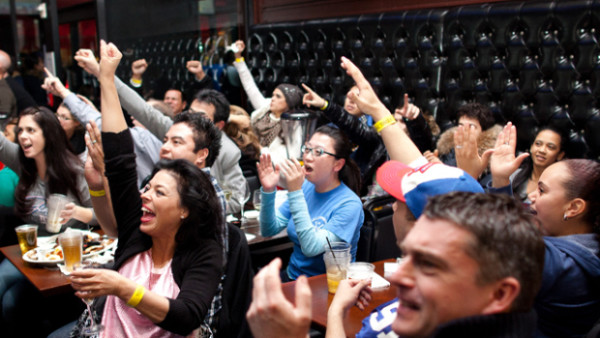 You’d think the opening week of college football would make me feel nostalgic about my time in Blacksburg, VA. The turkey legs, tailgates and wins give plenty of reason. Long walks to the stadium and friends escorted to the tank due to too many swigs of moonshine, stories of stories with details aplenty. College football was great at a big state school. Pro football was better.

At 12:15 on a Sunday, I rolled out of bed. Long Saturday nights made the seventh-day alarm come too soon. Sluggish and weary, the only thing that could make me move a muscle was the promise of NFL football.

A quick shower and the ritualistic warrior dressing later – all green, all the time – I was on my way to pick up whoever needed a ride, probably still asleep. After finding the unlatched door, a few loud bangs woke up the near-comatose friend.

Fantasy lineups set on the way downtown. Calls and texts to the rest of the group were placed. At 1 p.m., even the biggest straggler had a stool next to ours. The gang would be there until the final 4:15 game ended. Orders of wings, nachos and anything else unhealthy were eaten gingerly. Red Bull for me, beers for them. We ate, drank and watched.

I was lucky enough to befriend people with out-of-market teams. Sure, a Redskins or Ravens fan found their way in, but the necessity of NFL Sunday Ticket got us together. We had to go somewhere to watch the games, so we went to our dives.

One bar provided pick 'em sheets. Three of us usually took home the weekly contest prizes – gift cards to the same establishment. As any college student can attest, a free meal is better than a good grade. Once the games started, we went into our separate zones.

Watch your game intently. Keep tabs on your fantasy players. Find a TV where the loud eruption just occurred to see what the hell went down. At the end of the game, the gang checked around to see who won, who lost, who was going home to study and who wanted to hang out for the Sunday night game. Someone was guaranteed disappointment.

On Monday night, we’d all find an apartment, flip on the tube and relentlessly tease whoever had an assignment due Tuesday until they succumbed to the late grade and stayed. We teased, joked, laughed, talked trash, recounted stories, asked where such-and-such ever went and so on. Little did we know, Sundays made us all closer than we’d ever imagined.

Epic fantasy battles became legendary. Wins by less than a point remain sour subjects today. There was so much invested in the games. It wasn’t about a seat in the stadium like the day before. Instead, this was personal. Everyone rooted for Tech. Sunday divided us, which made us all stronger. It also allowed for empathy when a friend lost due to a late field goal. We’d drive home and talk about it. It ruined the week, as it always does for diehards.

The stench of smoke mixed with hot wing grease, sweat and beer was enough to make you want to burn your clothes. If only that holy jersey wasn’t a necessity. Burning it would be sacrilege. Looking back, those Sundays made us do our laundry – something college kids rarely do.

Those friends graduated before I did. But, they weren’t the only ones I connected with over football. Some came before, some came after. Their interests and teams helped shaped who I root for today. It’s always a good reason to place a call and catch up. The unquantifiable investment of Sundays in front of TVs paid off. I suspect it always will.

It saddens me now. The probability of us all sitting in the same room, watching the same games and making fun of one another is miniscule. Fantasy football leagues keep us together, but not like before. One lives in India, another in Pittsburgh. Two are in New York, and another is in New Jersey. The Turkish exchange student who we sometimes dragged along is back home with an expired student visa.

I think back to a nasty odor and nachos. I can smell what kickoff used to be, although I’m I'd vomit if it wafted in my nostrils today. I remember the games that ended in stunned defeat or jubilant success. The connection between us never fades, but it’ll never be the same again.

As the NFL season begins, I'll embark on another viewing relationship with a close friend from high school. We religiously watch the Eagles together. Maybe it won’t always be that way. Perhaps it’s just another bond that I’ll remember fondly a few years down the road.

When I sit down and watch this weekend, I’ll remember those rat nest apartments, the long hours spent running on fumes and the personalities who meshed together better than any Super Bowl-winning roster. It’s never the same.

For 17 Sundays – during commercial breaks – I’ll dream of those days.

3 Replies to “NFL Sundays Aren't The Same After College”