Welcome to The Sports Fan Journal’s music series, In The Rotation. Music fans are always trying to find the latest tunes to spin and our editor Mya Melody, a.k.a. the playlist virtuoso, is here to help. Whether you need a weekend turn up anthem or a smooth jam for a kickback, this series will highlight the week’s hottest song to add in your collection. Vibe out and enjoy! #MelodyPutYouOn

For as long as hip-hop has been around, rap beefs and diss tracks continue to be defining and intriguing moments in music history. Whether it was 50 Cent vs. Ja Rule, Jay-Z vs. Nas, Remy Ma vs. Nicki Minaj, or Drake vs. Pusha T, rap battles cause fans to dissect lyrics faster than Genius annotators and could potentially be a make-or-break chapter in an artist’s legacy. If rappers talk a good game about being the best MC alive, they better have the substance to prove it.

In the current NBA landscape, there are a number of ballers who consider themselves to be rappers. So what happens when a rap beef spews over into the most entertaining sports league? Marvin Bagley III vs. Damian Lillard.

After Bagley appeared on ESPN’s First Take and claimed to be the best rapper in the league, along with a potential rap battle against the Portland Trail Blazers star, Lillard was ready for a challenge. Shortly after the show, Bagley took to Twitter to release a track properly titled, “No Debate.”

For fans who have followed Lillard’s music career, they are well aware of how much he uses the summer season to focus on his rap persona as Dame D.O.L.L.A. After Bagley dropped his song, it only took Lillard a couple of hours to respond with his track titled, “MARVINNNNNN???”

Think of rap battles as no holds barred matches. Lillard heard Bagley coming for his rap title and used “MARVINNNNNN???” to call out the Sacramento Kings rookie for possessing “amateur bars.” But Lillard wasn’t ready to finish the battle just yet. He then dropped another track titled, “Bye Bye” as his official mic drop moment. If Lillard isn’t sending his opponents home in an elimination game, he’s sending them back to the studio. Which is exactly what Bagley did when he returned with a comeback on his second track, “Checkmate.”

Take this weekend to decide which baller won this rap battle and check out this week’s pertinent reading material:

The 20 greatest hip-hop tours of all time – The Undefeated

In The Rotation: “MARVINNNNNN???” by Damian Lillard

by Mya Singleton time to read: 1 min
Music In The Rotation: “Perfect Ten” by Must… 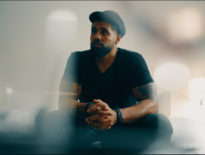