Welcome to The Sports Fan Journal’s music series, In The Rotation. Music fans are always trying to find the latest tunes to spin and our editor Mya Melody, a.k.a. the playlist virtuoso, is here to help. Whether you need a weekend turn-up anthem or a smooth jam for a kickback, this series will highlight the week’s hottest song to add in your collection. Vibe out and enjoy! #MelodyPutYouOn

Any true Ariana Grande fan, a.k.a. Arianator, knows the singer can easily release a song about relationships that people can relate to. From 2018’s “no tears left to cry” to this year’s breakup anthem, “thank u, next,” Grande is back at it again putting her fans in their feelings. This time around, she teams up with rising pop duo Social House on their latest single, “Boyfriend.”

This isn’t the first time Grande has collaborated with Social House. The duo was the opening act on Grande’s Sweetener Tour and landed production credits on some of the singer’s previous hits such as “thank u, next” and “7 rings.”

On “Boyfriend,” Grande and Social House get into the ups and downs of being in a situationship. Two people could be just dating, but neither wants to make the relationship official and sometimes that can cause other issues. Grande tweeted about her inspiration behind the song:

well, i feel like this song captures a common theme in the lives of so many people i know ! people want to feel love but don’t want to define their relationship & have trouble fully committing or trusting or allowing themselves to fully love someone. even tho they want to. 🌫 https://t.co/28CfLoJseu

Whether you’re in a relationship, feeling complicated, or single and ready to mingle, “Boyfriend” is a perfect summer bop for all the feels. While Ari does it big, grooving in the Givenchy dress at a mansion party, this summer track will do quite nicely at your local house party as well. So, put this song in the rotation for the backyard kickback, bust out the outdoor ping pong table, and get the barbecue and cornhole rolling the right way. With Miss Grande serving as the proper soundtrack.

Oh, and be sure to check out this week’s pertinent reading material:

The House Party Is The New Festival – VIBE

In The Rotation: “Boyfriend” by Ariana Grande & Social House

by Mya Singleton time to read: 1 min
Music In The Rotation: “Hot Girl Summer” by … 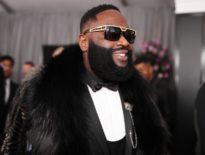 Music In The Rotation: “Gold Roses” by Rick …
0