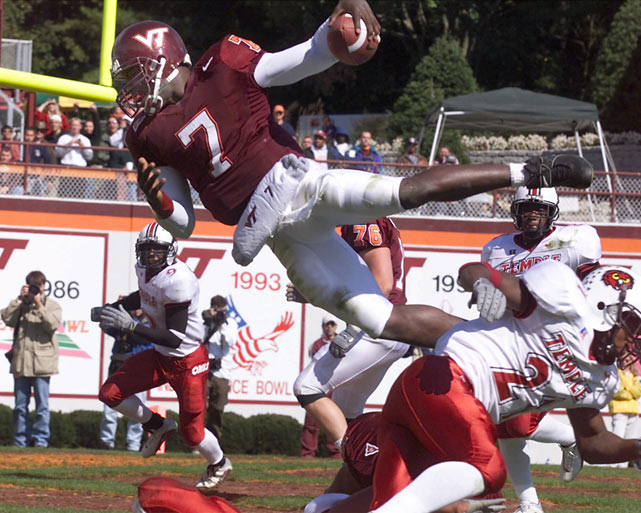 I’ve been in many stadiums and traveled to various fields. My eyes have seen great players and even better plays. Overtimes, milestones and blowouts are nothing new. At the ripe old age of 26, I know that I’ll never see anything as magical as Sept. 4, 1999 – Michael Vick’s first game as Virginia Tech’s starting quarterback.

My understanding doesn’t depress me. Knowing I’ve witnessed the most goose bump-inspiring sight in sports doesn’t keep me from watching. I’m one for nostalgia, and I feel like I’ve been here before. In front of a keyboard with the memories flooding back through my mind and out my fingertips. Maybe I have been here. At the very least, I’ve been somewhere similar.

Unlike the déjà vu-inducing moment, this post isn’t about my allegiance to the Hokies. It’s not about my dedication to the Philadelphia Eagles. It doesn’t detail a relationship with my late father. If that’s what you’re after, click through the hyperlink.

This is about how things tend to happen on this globe without reason or explanation. They don’t come back to you and ask for forgiveness or begin their occurrence begging for permission. Things happen and you see them. Sports sit atop the list of unpredictable. We never know what we’ll see when the ball snaps, the pitch is delivered or the shot taken. Viewers are reduced to nothingness as we watch and learn. Predictions and post-game griping make us feel smart, like we’re a part of the action. Deep down we know we are just hanging on every pass and waiting for those moments that take our breaths away. We wait for greatness, and sometimes, we see it running down a field among others who don’t belong on the same plane.

Watch a documentary about a sports figure and the clichés are everywhere. They’re all true to the voices retelling them. No one ever saw someone make a catch like Willie Mays did. The sheer power and speed of Bo Jackson changed things. Julius Erving’s dunk from the free throw line felt impossible. The true game-changers did what never could be imagined. The people who saw those feats, they realized the special talent immediately and naturally.

When Vick took off for the first time – a 54-yard dash – things changed for me. At 11 years old, I didn’t know enough about allegiance to assume my guy was better than other guys. Instead, I just knew it. He moved in a way that could only be compared to magic. He ran what felt like 400 yards in what felt like two seconds. He instantly became the main character in my storybook.

He chased a dream, then demons, then another dream, then turnover woes and now he’s back in a starting job. Chip Kelly decided rather than let Nick Foles run seven yards, he’d let Vick run 30. Of course, the 33-year-old has lost a fraction of a step, but when you start with what he had, it’s still valuable. 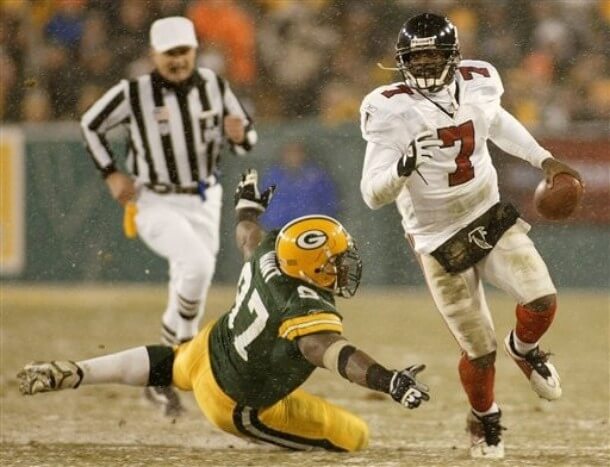 The raw ability combines with a sense of never-let-die that makes any comeback possible, yet any disaster owns the same probability. It’s exciting in the best and worst way, and yet, I can’t help but watch with baited breath. On a scramble, he looks like the kid sprinting around Lane Stadium. In those times, I see the 11-year-old me in myself.

I gasped for air the same way then as I do now. I’ve grown accustomed to gripes about Vick and his woes, but it can’t shake my faith. That faith doesn’t rest in the quarterback’s ability to win a Super Bowl. Rather, it’s a deep-rooted belief that when the going gets tough, there will be a moment when he takes off and changes his team’s fortune immediately.

His gallops will weave in and out, and he’ll endure one of the brutal hits to the ribs that makes you wonder why he won’t slide. I don’t know why he refuses to slide, but I would guess it’s because sliding takes planning. For Michael Vick – the one I saw then and the one I see now – planning is a mere afterthought.

It’s not on his mind. Instead, he likely grabs the feeling deep down that he can still avoid the last three defenders. He thinks can leap over or run around the guy in front of him. That’s what makes Vick an addiction I just can’t shake. His play and tendencies are as unpredictable as the moment he changed the way I saw the game. But, he plays with a warrior-like mentality that he’ll never quite give up. He thinks he can do it by himself, just one more time. There’s something admirable in that.

Depression over my top moment is a worry for another soul in another jersey. There’s nothing to regret about realizing the poetry in motion that Vick brought to my life, my eyes and my heart. With a quick move, he did enough. With blazing speed, he did more. With a rocket arm, he took the cake.

Regardless of Vick’s final endeavors, I know I was there and I know what I witnessed. It was pure, sublime and emotional. He scampered away with whatever awaited me as the greatest sports moment I’d seen. He simply ran down that field holding the ball like a Frisbee. He ran into the end zone, away from lesser opponents. He ran and ran, got caged, and ran some more.

When you see the moment that you’ll never lose – the one you’ll always cherish – you can’t get rid of it. That would mean sacrificing a part of you that’s too valuable to lose. It’s freedom and captivity, love and pain, and everything in between. It’s a number seven sprinting for the goal line. It’s a kid and a seat and a gasp. It’s something I haven’t seen since and won’t see again. It’s Vick and I, destined to share a sunny Saturday afternoon forever. For all the unpredictability he brings to life, he’s also removed all doubt of legacy to me.

He’s Michael Vick. I’ll never see another thing like him as long as I live. It’s a complicated concept that could span hours of conversation and research. On and on I could go, adding up stats and watching replays of the career that could have been. The career that should have been, or the one that simply was.

That would waste my time. It only took one play.

One Reply to “Michael Vick Left An Imprint From The Start”