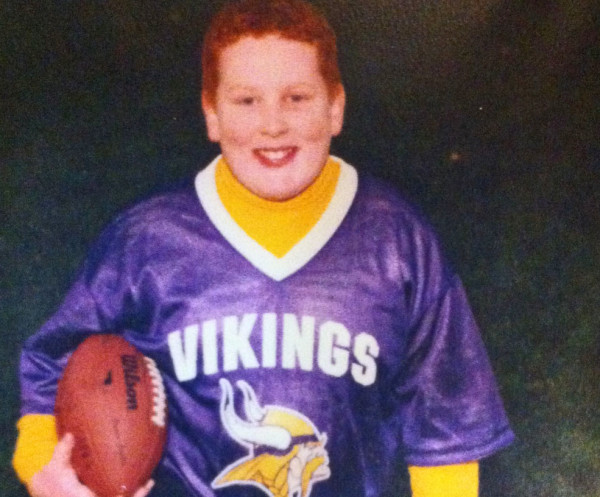 Here at The Sports Fan Journal, we hope to evolve and deliver something not found in any other corner of this here internet. We bring you Mark Trible and Dillon Friday's NFL Countdown project.

A fan from each NFL team will be featured as we anxiously away the season's kickoff.

Someone needs to tell the fans' stories. What better place than their trusty Journal? Without further ado, meet Minnesota Vikings fan Charlie Pillsbury.

On Jan. 17, 1999, Minnesotans shed enough tears to overflow Lake Superior. Their 16-1 Vikings, owners of the greatest offense in NFL history, lost to the Atlanta Falcons, 30-27, in overtime of the NFC Championship Game.

Citizens of the North Star State had been denied Super Bowls before, but rarely had it been so cruel. Charlie Pillsbury watched that game with his friend Tyler, less than two miles from Lake Superior in his childhood home.

“My brother and I had separate rooms,” says the Duluth native, who was nine at the time. “We shared a room that night and cried ourselves to sleep.”

The tears baptized Pillsbury into the church of purple and gold. Gary Anderson's missed field goal, Randall Cunningham's kneel-downs and Jamal Anderson's dirty bird are among the now 24-year-old's earliest memories of the Minnesota Vikings.

“It strengthens your fanhood,” he says. “It shows how much you care.”

In elementary school, Pillsbury drew pictures of Cris Carter for his first grade teacher Mrs. A — whose full name he can't remember — because they shared an affinity for the star receiver. Other than that, 1998 marks the beginning.

Pillsbury met head coach Dennis Green at the Vikings practice facility prior to the record-setting season. He made sure to wear his “My favorite teams are the Vikings and whoever plays the Packers” t-shirt.

“[Green] had that weird voice,” Pillsbury recalls, the irony lost on him — a born-and-bred Minnesotan calling another man's voice weird 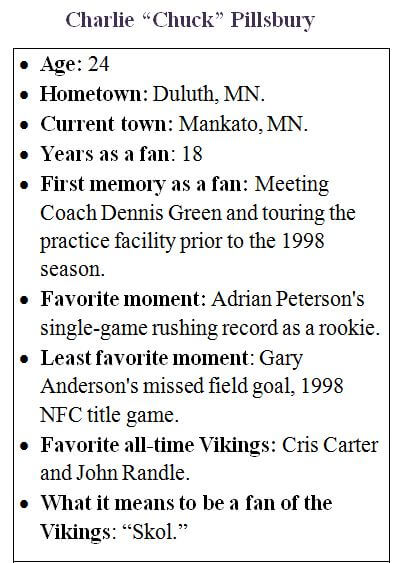 His obliviousness to the statement speaks to the trait that defines Vikings fans. They're delusional. How could they not be?

Minnesotans survive winters where six inches of snow constitutes a dusting. A 40-degree temperature calls for shorts. On top of that, they cheer on a football team that stands on the precipice of relevance. They’re not bad enough to be clumped with the Browns or the Bills of the world and not quite good enough to be considered a marquee franchise.

Minnesota's 27 playoff appearances are second most behind the Dallas Cowboys' 30 for clubs after 1960. Its .541 all-time winning percentage is the seventh best in the NFL. The Vikings boast four quarterbacks — Warren Moon, Cunningham, Daunte Culpepper and Brett Favre — who eclipsed 30 touchdown passes in a season. Only the San Francisco 49ers, with Joe Montana, Steve Young, Jeff Garcia and John Brodie, can match that feat.

That 0-4 Super Bowl record, though, sticks out like a white pine in the prairie, ensuring that “choke” joins “rape, murder and pillage” as the verbs most associated with Vikings.

Pillsbury insists he carries no burden from Super Bowl follies, the last of which occurred in 1977, 12 years before his birth. Still, he's experienced enough heartache in his decade and a half as a fan to empathize with the Purple People Eaters generation.

From Gary Anderson's kick gone awry to the 41-0 NFC Championship blowout in New York, to whizzinators, love boats, 6-0 collapses and petulant wide receivers, Pillsbury lists off a seemingly endless string of moments he calls “not so great.”

All of them pale in comparison to the 2009 season. Vikings fans embraced a twice-retired quarterback, once vilified as Minnesota's most hated man, as savior. The scenario reeked of a deal with the devil, and the Vikings were rewarded. Favre delivered the finest season of his career, throwing 33 touchdown passes against seven interceptions as Minnesota finished 12-4.

“I always thought it'd be fun to get Favre,” Pillsbury remembers. “We were at such a horrible position with our quarterbacks. If he went directly to the Vikings, it would have been hard to take.”

The romanticism dissipated on the turf of the Superdome in January's NFC Championship against the Saints. Favre, beaten to a pulp by a bounty-fueled defense, threw an ill-advised interception as the Vikings were driving at the end of regulation.

Adrian Peterson fumbled three times in the game. Drew Brees marched the Saints down the field in overtime for a winning field goal. The 31-28 loss shook the Minnesota fan base once again.

“A friend and I watched in Grand Forks,” says Pillsbury, who was studying at the University of North Dakota at the time. “After the game, I wailed a broken hockey stick on the wall. Everyone was down on the last play. I was too pissed at the refs to dwell on that.”

Pillsbury, who graduated from the University of Minnesota-Duluth after transferring from North Dakota, reveals that he's “not one to dwell on anything,” even devastating losses.

The Vikings can shatter his hockey sticks but not his spirit.

“I'm an optimist when it comes to the Vikings,” he says. “Most fans are pessimists.”

With that outlier status, Pillsbury finds comfort watching the Vikes by himself. He sips a six pack of Summit — an upgrade over the Grain Belts of his younger days — and and tunes out the noise his fellow Minnesotans spew every fall.

“Each season, if there's trouble at all, the fans automatically start complaining,” he says. “They want to get rid of the coach or get rid of the QB. There's no consistency. Anytime anything happens there's a reaction.”

Pillsbury is cautiously confident heading into the 2014 season. He likes the Mike Zimmer hire as head coach. He believes Teddy Bridgewater could prove to be the franchise quarterback the Vikings have been searching for since Fran Tarkenton retired in 1978. And, as always, having Peterson helps.

“It has to happen sooner or later,” says Pillsbury, a graduate student at Minnesota State University-Mankato, the hosts of Vikings training camp.

It is a Lombardi Trophy. If it doesn't happen, Pillsbury's experience as a fan could aid him in his chosen profession.

He's pursuing a degree in counseling.

10 Replies to “Meet The Fan: Pillsbury Stays Optimistic Despite Minnesota Vikings' Past”