Despite an appearance in the big game last year, signing fourth-year quarterback Jared Goff to a massive four-year, $134 million contract extension is the moment the Rams killed a chance at a return.

The number one overall pick in 2016, Goff got off to an inauspicious start. Then-Rams head coach Jeff Fisher reportedly did not want to draft him. He began his career third on the depth chart behind journeymen Case Keenum and Sean Mannion. He threw five touchdowns and seven interceptions while completing less than 55 percent of his passes as a rookie. He was compared to Ryan Leaf – and it was a legitimate comparison.

Enter wunderkind head coach Sean McVay. The Rams hired the then 30-year-old former Washington offensive coordinator, making him the youngest head coach in the NFL. Goff and the Rams offense skyrocketed to the top of the league – with McVay calling the plays.

The offense was successful in its first season, but in the first half of 2018, it was historic. The Rams started 8-0, making Goff the second quarterback ever under 25 years old with such a start. The other? Dan Marino. Goff, along with Patrick Mahomes and Drew Brees, was a prominent part of the MVP discussion.

However, the Rams offense operated in their base 11 formation – one running back, one tight end and three wide receivers, on 90+% of plays in 2018. Football is a game of attrition. Cooper Kupp, one of Jared Goff’s favorite targets, tore his ACL in a win against the Seahawks. Todd Gurley got knicked up in the fantastic Monday night thriller in the Los Angeles Coliseum the next week.

The Rams scored over 31 points and had at least 410 yards of total offense per game all but twice before Gurley’s injury. After the bye week, Los Angeles would only reach such totals twice again in five weeks against a very weak schedule. The Rams would lose to both playoff teams it faced in that stretch, the Bears and the Eagles, and feast on three of the worst teams in football – the Lions, Cardinals, and 49ers.

Receivers were running wide open when the Rams’ offense was cooking, as a function of Todd Gurley’s play action. 36% of Rams passes came off play-action. As soon as Gurley’s threat was limited, Goff fell off a cliff. His numbers with a healthy Gurley? 67% completion percentage, 26 touchdowns, and six interceptions. He’d finish the last five games with a 58% completion percentage with a one-to-one touchdown to interception ratio.

Even his playoff run was fluky at best. Signed after Gurley’s injury, CJ Anderson and his pregnancy weight rumbled through the Cowboys defense for 123 yards and two scores in the divisional round. Drew Brees and the Saints were marching down the field towards likely victory until the worst non-call in NFL history gave the Rams another chance to win.

In the Super Bowl, Goff was confused and overmatched. Patriots coach Bill Belichick, known to feast on subpar quarterbacks, disguised his defenses masterfully. NFL rules allow coaches to communicate with their quarterbacks through headset until there are 15 seconds remaining on the play clock. McVay utilized all the allotted time calling the play and telling his quarterback what to look for based on the alignment of the defense. Belichick then audibled his defense, changing the look once the mic in Goff’s ear went off.

McVay gave Goff the answers – but then Belichick changed the test. Goff failed, mustering three points and one interception.

Goff is not an incapable quarterback, but he needs high-profile weapons around him to be successful. However, giving Goff the most guaranteed money in the NFL is going to seriously hinder the Rams ability to do just that.

Rams receivers roamed free for the first eight games in 2018. It didn’t seem that Goff was doing anything besides hitting open receives in stride – which is important. There are quarterbacks starting on Sunday who can’t do that consistently. But the highest-paid guy on the team has to be able to deliver, no matter what circumstances are around him. When Goff had a full complement of weapons, he ranked eighth in completion percentage, and fifth in TD-to-INT ratio. After Kupp and Gurley got hurt, Goff plummeted to 27th and tied for 25th in those same categories.

Aaron Rodgers, Kirk Cousins, Jimmy Garappolo and Russell Wilson all signed mega-deals like this. Rodgers and Wilson’s contracts look like bargains every Sunday while they consistently baffle defenses and elevate their teammates. Fans of Cousins and Garappolo are asking themselves the same question most other NFL fanbases are – “Can we win with this guy?” – regardless of how finite a possibility it may be.

Jared Goff could develop into the type of quarterback who can make up for deficiencies around him, but he hasn’t been so far – even when playing at his best. It’s always risky guaranteeing money on potential instead of production. 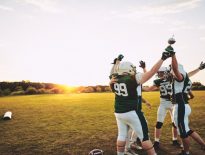 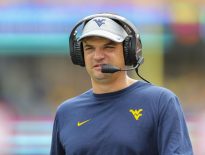