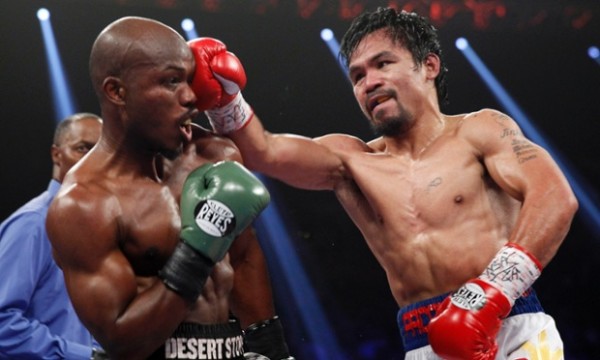 Manny Pacquaio was dominant in his rematch against undefeated Welterweight Champion Timothy Bradley Jr. In the domination, there were some similarities with their first fight, but the second time around both boxers became slightly mimeographed versions of their greater, true selves — Pacquiao just a bit slower and Bradley a lot less strategic. It produced a more fan-friendly fight, with an infinitely more digestible ending, but it also raises new questions and resurrects old hopes.

It wasn’t until the fourth round that Bradley even seemed to be in the fight. Sure, his pressure was undeniably strong and constant, but he wasn’t landing any leather. Then came the right hand that wobbled Pacquiao in the fourth.

Although it earned Bradley a place on the scorecards, and likely breathed some hope into his corner, it also encouraged what only he and his team thought was a sensible game plan. Their approach to the fight was to come out swinging for the fences. It was knockout or bust for Team Bradley. They simply didn’t think they could win on the scorecards.

That explains why in the wake of the fourth, Bradley winged wild haymakers with reckless abandon. Unfortunately for him, the punches barely landed on Pacquiao’s shadow, much less the Congressman’s chin. Even still, the aggression was favorable to how Bradley fought rounds 8 through 11. For these rounds, it was like he forgot how to move forward or throw punches. He didn’t so much dance away from Pacquiao’s danger as skitter away from it. In the ninth, Bradley was hit so cleanly that he fell into the ropes and narrowly escaped hitting the canvass. There was a closer final round, but even still, anyone besides C.J. Ross would not have a difficult time scoring the bout.

In defeat, Bradley was characteristically humble and gracious. He offered no excuses at the post-fight press conference. Instead he simply said that Pacquiao was the better man. But where was that sportsmanship in the fight? At points, Bradley displayed bizarre spurts of showboating that were neither preceded nor followed by anything that could be called impressive. If anything, the intervals of arrogance compounded his lack of much needed activity and maybe even lost him some fans.

So what did we learn from the rematch? Pacquaio wasn’t able to break his drought of knockouts. He was able to hurt Bradley but not finish him. This time around it wasn’t because he didn’t press the issue or have too much compassion for his opponent. He couldn’t finish Bradley because Bradley has gotten that good and maybe because Pacquiao’s leg cramps, that according to the fighter resurfaced after a few fights without them.

We also saw that the remedy for Bradley’s athleticism is speed and angles. Despite his brilliant boxing acumen and prodigious ability to adjust, Juan Manuel Marquez couldn’t defeat Bradley’s athletic prowess because Marquez lacked speed and quick-twitch muscles to react fast enough to Bradley's defensive weaknesses.

For Pacquiao, the physicality and athleticism of a fighter like Bradley aren't the issues they have been for so many others because Pacquiao’s own speed and awkwardness are effective counterpoints. Pacquiao has faltered in the past with masters of distance and timing, like Marquez. And when it comes to the king of these and the other fine points of boxing, Floyd Mayweather Jr. reigns supreme. Which brings us to the most hated and beloved question in boxing: Will Pacquaio ever fight Mayweather?

According to Bob Arum, they’ll fight when fans start boycotting the “garbage” fights that Mayweather seps up and when the MGM Grand stops peddling “non-competitive” fights. If that happens, and Mayweather shows some sign that he’s willing to sit down at a table to negotiate, then, and only then, will these two ring kings have a chance at meeting in the squared circle.

Arum started screaming before the press could ask about how often he’d actually reached out to any of the central figures from the Mayweather camp. If Arum hasn’t called or sent an email to Richard Schaffer, Al Haymon, Leonard Ellerbe or even Mayweather’s head of PR, then it's hard to believe in Arum’s sincerity about being open to the fight.

More than likely, as Arum hinted, Pacquiao’s next fight will be against the winner of the Juan Manuel Marquez vs. Mike Alvarado fight May 17. Alvarado without a doubt would take the fight for the money. Marquez would now likely agree to fight his nemesis after repeated statements that he would never do so again, simply because it would give Marquez the opportunity to make history. With his Welterweight title in hand, Pacquaio now offers not just a big payday, but he offers Marquez the opportunity to become the first Mexican to win five titles in five weight classes. And there aren’t many boxers more interested in legacy and history than Marquez.

While a fifth meeting between Pacquiao and Marquez would undoubtedly be entertaining, and maybe even historic, it cannot, does not and will never offer boxing fans and boxing history what the clash with Mayweather does. 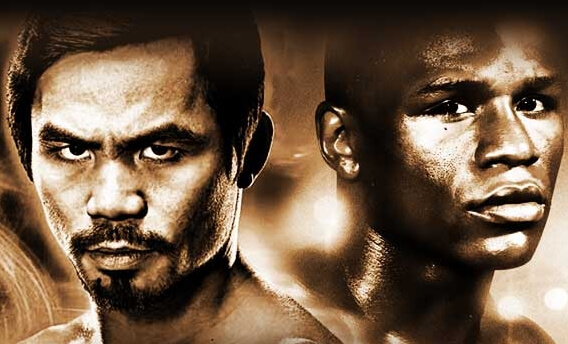 In a very short time, boxing will lose two of the greatest fighters in this or any generation. It just so happens they weigh the same amount. As Pacquiao proved convincingly on Saturday, he’s still got greatness in him, even if he’s not supernatural anymore. Which means, even four years removed from the first fever pitch that this fight caused, the fight still matters.

Truth be told, fans still want it, but they’re jaded and resentful. They’ve been abused for too long by promoters’ false starts and weak efforts. They still want the fight, they’re just afraid to say it. But hear me now, loud and clear. If we, the press and the fans, don’t call for it, don’t push beyond our hurt feelings, then our older, wiser selves will be sorely disappointed in us. Our future selves will be deprived of a memory to reminisce about on the nostalgic nights of our old age. And more importantly, if in a generation we have ceded more ground and fans to MMA or other sports, we’ll have no one to blame but ourselves. Yes, Mayweather-Pacquiao is that important. It can have that type of impact in the broader society. This fight won't just help boxers top the list of the best paid athletes, it will catapult boxers to top of the social relevance scale. We just have to be brave enough to demand it and dream for it beyond the limits of reason.

6 Replies to “Manny Pacquiao: Correcting History And Maybe Looking To Make Some More”