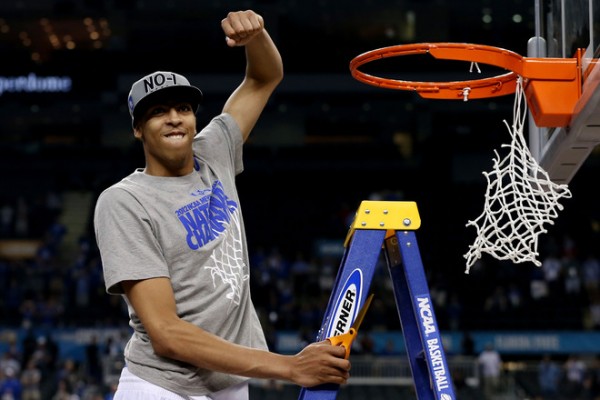 When everything was said and done, Kansas was just the 38th butt in Kentucky’s ashtray.

If that sounds too dismissive of the Jayhawks, it should.

Coming into the tournament, and subsequently, the championship game, everyone knew that Kentucky was the team to beat. This tournament had all the makings of the UK Invitational. The Cats were bigger, stronger, quicker, and more talented than every other team.

Monday night, they were once again bigger, stronger, quicker, and more talented. The crown has been polished and placed atop the Big Blue Nation again. This year, that's exactly where it belonged.

Despite a late Kansas run, they were outclassed from the start. Hat tips all around for the scrappy Jayhawks, though. They fought their way to the final game and kept fighting despite being out-manned once they got there. They almost created a repeat of Calipari’s nightmare; the 2008 national championship game.

It just wasn’t meant to be. How ironic, that of all the opponents and all the scenarios, Calipari got his first taste of the glory in a similar circumstance.

This time, there was no Mario Chalmers. This time, Cal had the last laugh.

Although he pushed away any credit that came his way on the awards stage, this was his vindication. While the monkey of his past issues will probably remain on his back from his detractors, no one can say he couldn’t win the big one anymore.

Make no mistake about this year’s edition of the Kentucky Wildcats: these were men. When Kansas bricked layups, they altered their shots and bobbled the ball out of bounds. 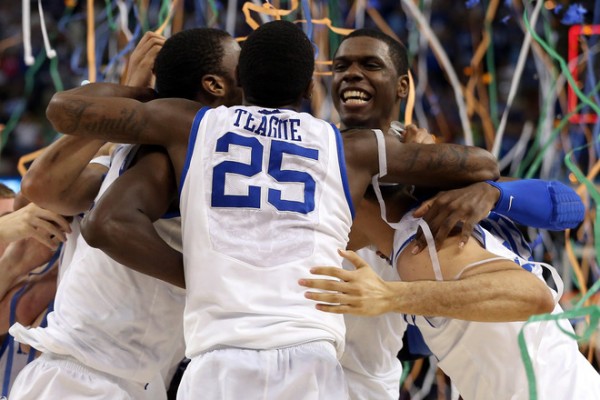 When Kentucky was hacked on the way up with no whistle, they’d grab the ball. The Wildcats would go up strong again. If they lost the ball, they’d go up again. Straight up playing a man’s game, with amateur status, like men.

These men looked more like video game prototypes than real, live beings. They were carefully sculpted, strong and fierce, determined and athletic.

Often times, Cal’s coaching will be swept under the rug. Many will claim he just, ‘rolls the ball out’ and watches the show. That’s not true. But, if it was true, Kentucky would have still hoisted the title Monday.

In fact, when Cal put the clamps down on the Cats (which he admitted after the game), Kansas threatened to come back. Maybe they’d have been even better if he just rolled the ball out on the court.

The fantastic players showed that talent reigns supreme. Some of them are one-and-done mercenaries, but kids have to go somewhere to play. No one blames them for going to Kentucky and grooming their game with Cal at the helm. His track record with the one-and-dones speaks for itself.

Now, some leave after a year with the 'Cats. In the irony of the rule, they leave while boatloads of Kentucky faithful who have invested many more years will praise them forever. It’s the way college basketball is, and it’s best not to hate the player. Instead, hate the game.

About a month ago, former UNLV Coach Jerry Tarkanian, who won the 1990 championship in dominating fashion, told me, “That whole tournament is luck; unless you have a great team.”

Kentucky illustrated Tark's point. The Wildcats needed no luck. They were great.

If you don’t believe that, ask the 38 butts in the overflowing ashtray. They were smoked, right down to the last one, snuffed out in the Big Easy.