The 2018-19 NCAA college basketball season is nearing its regular season end. Hundreds of men’s and women’s team from now until April, we’ll be following along, closely watching. But instead of just box scores and highlights, we’re going to profile a player from each class, plus one additional story. With TSFJ and the help from Josh Naso, we present to you The Sports Fan Journal’s Box And One.

In The Zone: Conference play in college basketball has a way of bearing out where the top teams of each league play each other towards the end of the regular season. It just seems like there are ranked games throughout the nation, perfectly scheduled for nationally televised broadcasts. This certainly comes with the assumption that these scheduled teams will live up to expectations, but I’m sure there’s room for flexibility if there are surprises.

The ACC is loaded with really good games. For especially the latter half of this decade, Duke, North Carolina and Virginia have been at or near the top, battling for the regular season conference title. In the latter half of league play, Duke has beaten Virginia both times, while the Cavaliers have beaten the Tar Heels in their only meeting, so far. With Wednesday’s storied matchup of North Carolina and Duke taking place in Cameron Indoor Arena, the top three teams will have faced each other. These three schools are separated by two games in conference standings, and as the regular season winds down, there is still time for some shuffling.

Tennessee has been the mild surprise of the SEC. While they were expected to be really good, few didn’t foresee them being atop the conference, let alone be the top-ranked team nationally at one point. Most believed that Kentucky is still the standard bearer with which other conference teams judge how good they are. Well, if Saturday’s convincing win over the Vols is evidence, then Tennessee is really good with the flaw of not being able to handle other talented teams.

Kentucky was more physical than Tennessee—which has been one of the staples of Rick Barnes’s squad this year. Vols forward Grant Williams had a tough time with Kentucky’s PJ Washington, being limited to just four field goal attempts (albeit with nine free throw attempts) while Washington scored 33 points. This does not mean that Tennessee isn’t a Final Four contender, however it does prove that the Vols still have some work to do in order to actualize that potential. It also confirms that yearly philosophy of John Calipari’s teams improving right as the Tournament rolls around.

Schedule makers deserve some credit for having a lot of these top tier matchups late in the regular season to help generate excitement for both conference and NCAA tournament play over the next few weeks. As we enter the home stretch, the quality of basketball will elevate as teams vie for those league titles.

This week, we’ll highlight some players from those top teams:

Freshman: Ashton Hagans, Kentucky Wildcats. As mentioned earlier, teams coached by Calipari tend to greatly improve as the season goes along. A big part of why that happens is because his point guards begin to come into their role as floor generals. Though talented, freshmen are still freshmen, and Calipari usually has one running his team. From John Wall and Marquis Teague to De’Aaron Fox and Shai Gilgeous-Alexander, Kentucky’s point guards seem to just get better and be better by March. Ashton Hagans is the latest to man the point in Lexington. Though he isn’t the statistical beast like his predecessors (7.2 ppg and 4.4 apg), he is very heady and steady at the lead guard position. He’s also a tremendous on-ball defender, setting the tone as the team’s defense comes together. Kentucky has talent at every position, but guards matter come Tournament time. Hagans will be vital to Kentucky’s success.

Sophomore: Bruno Fernando, Maryland Terrapins. Maryland has not been in the National spotlight much since it won the NCAA Championship back in 2002. In fact, it could be well argued that the women’s program has been better than the men’s since then, having risen to elite status under head coach Brenda Frese. Men’s coach Mark Turgeon has done a somewhat decent job with the Terps, but it has yet to translate into postseason success. This year, the men’s team is ranked, and a big reason for that is sophomore big man Bruno Fernando. The 6’10” forward is very versatile, showing both a touch on offense (14.5 points per game) and a knack for rebounding (10.6). He’s definitely got pro potential, and that kind of talent has already produced results, as Fernando had the game-sealing tip to beat Iowa on Monday, pushing Terps to 11-5 in Big Ten conference play. We’ll see how it goes come March, but Fernando is definitely talented enough to make Maryland a tough out.

Junior: Kyle Guy, Virginia Cavaliers. Virginia just seems to have guys that can play. Sure, head coach Tony Bennett has instilled a philosophy of limiting mistakes and playing outstanding defense. But any basketball system requires players to have the mental and physical capabilities to execute it. Kyle Guy embodies that. He’s the leading scorer for the Cavaliers, but he seems to be in the moments to make big shots or plays when the team needs it. This is especially true as his 23 points helped the Cavaliers defeat Virginia Tech in their last game. Virginia isn’t going to blow many fans out because of how they play, so they will need Guy to step up—especially if they want to avoid a fate different from last year’s.

Senior: Kalani Brown, Baylor Bears. As of Monday, the Bears top the women’s national rankings. Their best player, Kalani Brown, deserves credit as the fulcrum that helps the Baylor machine operate correctly. As with any top team, Baylor is talented everywhere on the court, but Brown ensures that the other players’ jobs are easier. Her 16 points and 8 rebounds a night while shooting 64 percent from the field proves that she maximizes her opportunities but does not hoard opportunities from teammates. Baylor will likely be a very high seed in the Tournament, and will be hard to beat.

And One: Under Head Coach Bill Self, the University of Kansas men’s team has won at least a share of the Big 12 regular season title for the last 14 years. For over three cycles of recruiting class, the Jayhawks have dominated. As of February 20, however, Kansas is tied for second at 9-4 in league play. They’re one game behind in-state rival Kansas State and tied with Texas Tech. As we near the end of the regular season, it’ll be interesting to see if Kansas can swipe yet another conference title away and hold onto its claim as the Big 12’s best. They’ll get a chance to control their destiny since the Jayhawks play the Wildcats and the Red Raiders in consecutive games, starting with Texas Tech this coming Saturday and finishing Kansas State on Monday. As I said earlier, few schedule makers seem to be very good at placing the big time matchups late in the year with standings on the line.

Fifteen weeks in, and we’re still in the zone. Enjoy the college basketball season, folks. 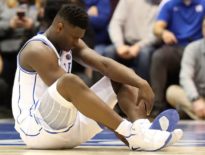 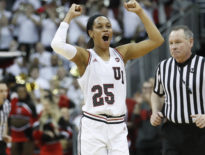