What good it’s a series without a trilogy? For the third time, The Sports Fan Journal heads on the NBA Journey. For the first two years, we had a level of surety as to where our destination would be. The first year, we were correct. The second, we were correct in location, but not in victor, as the Toronto Raptors won the title last year. Now, the NBA springs anew and for the first time in a while, we’re not totally sure where our destination lies. This allows for a current kind of exploration. Let’s continue with our next installment after a week of games.

Young, talented wing scorers are a fascinating group of players in the NBA. The easiest part of the game comes easier to them than most, and they seem to reach the higher tiers of offensive production despite having holes in their games. Also, if that player is on a bad team, those numbers still improve even though he’s the best option among a group of worse options. Sometimes, those players never receive the additional pieces needed to have the progress they individually make impact overall team success.

Devin Booker of the Phoenix Suns has been in such a predicament his first five years in the NBA. After the departures of Steve Nash and Amar’e Stoudemire, the franchise has been one of the worst from then until now. Booker was drafted in 2015, and is the brightest spot for a team mired in darkness. The methods with which the Suns have tried to find stability have not worked. Since Booker was selected, he’s seen five head coaches and a change at GM.

At just 23 years old, Booker is younger than Giannis Antetokounmpo, Joel Embiid, Donovan Mitchell (by one month) and other stars dubbed the future of The Association. He, too, has superstar potential all over him. But because Phoenix has been awful, his productivity comes with a level of tarnish. His points are seen as somewhat empty because of the lack of victories. But it also seems as if true success for him will have to come if he left the Suns via trade or free agency.

This year, however, seems different. The Suns have started well. Effort and production have begun to translate into some solid wins, including victories over the Los Angeles Clippers and Philadelphia 76ers. Sentiment surrounding the team has switched from dealing with more growing pains to a feeling of actually having a solid foundation. Here are some major keys that have helped Booker grow.

A stable Head Coach and General Manager. James Jones hiring Monty Williams to be the Suns’ fifth head coach since 2013 has paid early dividends. Players seem to be responding to him.

Ricky Rubio. Signing veteran point guard Ricky Rubio this past summer has taken much of the offensive load away from Booker. Last year, he was the team’s de facto floor general. And in addition to having to bear a lot of the scoring load, had to distribute to teammates. While that expanded the list of skills Booker has, he’s best optimized moving off the ball and setting up that gorgeous jumper of his. Rubio takes responsibility away from Booker and allows him to be the most powerful version of himself.

Kelly Oubre’s emergence. The Suns traded for Kelly Oubre Jr. last season and it appeared to be a bit of a throwaway move. But he’s developed into a really good two-way wing player. The Suns let TJ Warren walk in free agency, and it opened up Oubre to have a more pivotal role. He’s athletic and adept at scoring and defense–a very good complement to Booker.

Yes, in order to develop a superstar, there needs to be potential and talent there. Just as in The Legend of Zelda series, Link is the chosen one of the people from the Deku Village to save the country of Hyrule. He is a bearer of one of the elements of The Triforce, courage, and that aids his heroic quest. But every hero needs help. The quest requires items and people who possess various skills in order to complete the necessary goals for victory. No one can do it alone. I don’t know how close Devin Booker and the Phoenix Suns are to becoming championship contenders, but I do know the things and people currently surrounding him has provided a better environment for him to grow into one of the future superstars of the NBA.

Three weeks in and the Journey continues. Happy NBA, folks. 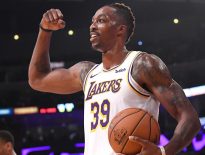