If your favorite NBA team wasn’t a title contender, it was likely leaving tributes at the base of Mt. Zion (Williamson). Twelve franchises all sit under the stoplight that is the 2019 NBA Draft. TSFJ gives each team a reason to speed through, take caution and even hit the brakes hard before making a wrong turn. We continue this series with a look at the second overall pick and the Memphis Grizzlies.

Just a few years ago, the Grizzlies were that tough playoff contender that always seemed one piece away from being a serious threat to win a title. But recent years have been hard. Mike Conley Jr. was constantly coming off injuries, while fellow franchise cornerstone Marc Gasol was sent to Toronto at the trade deadline. And just like that, the Grizzlies found themselves in rebuilding mode.

The NBA Draft Lottery odds threw them a huge turn of favor, landing the Grizz the #2 pick overall pick, after entering the night with the ninth-best odds of rising to #1. It also protected the pick from changing hands to the Boston Celtics, which would have occurred if it landed outside of the top six slots. Instead, that is a turn of fate which shifts to 2020. Meanwhile, the Grizzlies continued to move the rebuild ahead, by trading Conley to the Utah Jazz, amid a deal that lands them a second first round pick, via the 23rd overall slot.

However, it is the second overall pick that brings a potentially franchise-changing opportunity to Tennessee, so lets lock in on the options at hand for that one.

While I firmly believe this is more than a two-player draft, it does feel like two of the players have more superstar potential than the rest of the class. Memphis needs a shot in the arm to regenerate excitement and hope in the team. Morant became everyone’s favorite college guard over the course of the NCAA season, as the electrifying highlights of his play for Murray State steadily began to make the rounds.

He became the first player in NCAA history to average 20 points and 10 assists a night, and did so in an often jaw-dropping fashion. While the Racers’ tournament run didn’t extend past the first weekend, Morant put a stamp on his status the second-best prospect available. He would fit really well with young big man Jaren Jackson Jr., who is remains the building block piece of the Grizzlies’ turnaround hopes. The trade of Conley simply paved the way for Morant to take the keys to driving home the turnaround from day one.

While nobody has dared to entertain the thought of asking the Pelicans about if they are open for business (trading the rights to landing Zion with the top pick), there has been some buzz around inquires into moving up for the second pick. This is more of a red light scenario than any, but we’ll leave it here if for no other reason than there is a worse possible outcome they could choose.

No team has the type of trade ammo to offer a suitable exchange for this pick. The Pelicans won’t be moving back and if Memphis wanted anybody else, they could simply draft them. After shedding a pair of huge salaries in Conley and Gasol, they are in position to do a rebuild the right way. Bringing on a high-priced veteran who still couldn’t truly make them a threat in the next few seasons is counterproductive. Keep it simple: keep the pick, honor the good fortune of landing at #2 in the first place and take the potentially transformation point guard in Morant.

Red Light: Drafting anyone but Morant

To continue my point about not passing on the “Point God,” it would be nearly impossible to justify drafting any of the other very good prospects. I’m not saying that R.J. Barrett, Jarrett Culver or any other player wouldn’t turn out in Memphis, but that would be a hard sell in the moment. Morant seems to emit star shine that’s brighter than every other player except one. Let this not be a situation where the Grizzlies’ front office overestimates its collective genius and overlooks the obvious to appear smarter than everyone else.

NBA Draft Avenue: What The Memphis Grizzlies Should Do With The Second Pick 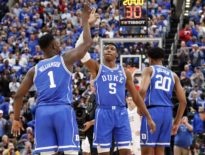 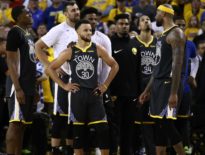 Basketball Back to the NBA Journey: Final Destination, Part T…
0