DC Comics superhero The Flash has a few different iterations. From Barry Allen to Wally West, a handful of people have taken up the mantle as Center City’s protective speedster. The Flash is not the most powerful superhero. It’s even somewhat debatable if he’s the fastest. But he is iconic in his own right, with his lightning-based logo and performing heroic feats with movement faster than the human eye can see.

All-time NBA great Dwyane Wade took on “Flash” as his nickname. From a distance, it may not seem to fit him. Wade is not a blur on the court. As a bigger guard, he uses elongated strides with precise placement to cover distances. But when further examining Wade’s game, it can be realized that Flash is the perfect nickname for him.

Let’s begin with the best scene in the 2017 movie, Justice League:

Initially, this scene is used to show just how powerful Superman actually is in relation to the rest of the heroes. With Batman and Wonder Woman in his clutches, The Flash tries to run as fast as he can for a sneak attack. Superman turns his head to make it known that he can see someone who moves faster than most can see. But look at it this way. The Flash can also see Superman. The slow motion shot used for their eye contact is to demonstrate that both of them operate at this level of speed.

That is how Dwyane Wade sees basketball. He is so precise and so quick with his movements in an arena with other elite athletes, that it appears he’s moving in slow motion. It seems like that until “normal” speed kicks and Wade explodes past a defender or off the floor for a dunk. Look at this move and dunk against the Oklahoma City Thunder. After faking right and going left, Wade spins around a defender. He then rises out of that spin to throw down a powerful finish over seven-foot Kendrick Perkins. The best part is, like The Flash, Wade knew that was special and celebrated accordingly.

By definition, speed is the rate of distance covered over time. The sooner one gets from Point A to Point B, the faster that person or object is. The Flash is illustrated and shown as being so fast that it appears that he moved from Point A to Point B in an instant. One moment, he was one place, then the next sight of him is someplace else. It’s different than teleportation, because it is understood that The Flash moved on foot to Point B — he was just too quick to see. This describes a moment in Wade’s career where he dribbled around former Cleveland Cavaliers forward Sasha Pavlovic’s back to avoid him before throwing an alley-oop to Shaquille O’Neal. One moment, Wade was in front of his opponent. The next, he was around and by his opponent. That kind of quickness and confidence to attempt that move in an NBA game is something only the superhuman dare to try. Moments like that confirm Wade as special.

Sometimes, athleticism is so great that it may appear to not be as great as it is. That sums up Dwyane Wade perfectly. We know he’s an NBA great. But when we really take a moment to appreciate him, we further acknowledge just how amazing he truly is. Enjoy retirement, Flash.

Flash Week: Dwyane Wade Lives Up To His Nickname 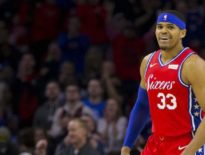 Basketball Back to the NBA Journey, Week Seventeen: Merchant …
0