The NBA had yet another dramatic change in its landscape in the wee hours between Friday and Saturday. The epicenter of the Association is once again in Los Angeles, but with a slight twist as free agents Kawhi Leonard had decided to sign with the Clippers. The “other team in L.A.” also stuck a deal with the Oklahoma City Thunder to acquire perennial All-Star Paul George for a handful of picks, Danilo Gallinari and budding guard Shai Gilgeous-Alexander. As we recover from the misdirection multiple journalistic outlets received regarding Leonard’s destination, let’s break down what we actually learned with the entirety of the deal.

The NBA is Both Balanced and Imbalanced

There are still a great number of people who believe the NBA of yesteryear was fair and balanced. We’ve been sold a narrative that every team has a chance at championship greatness and today’s NBA has ruined the idea of parity. That has never been true, and there is plenty of sports betting advice that backs this point up. To further that point, more than half the playoff teams aren’t given any real chance to win the title. Those teams are good with no hope of competing in the Finals unless they become great.

The core of that philosophy is to have all least two All-Star caliber players as close to the elite as possible. One of them certainly has to be in upper echelon of All-Stars, with the other being amongst the perennial All-Star players. The NBA has quite a few duos with this distinction now. Leonard and George, Ben Simmons and Joel Embiid, LeBron James and Anthony Davis, the list goes on.

That understanding is why the Brooklyn Nets and Golden State Warriors were willing to sign Kevin Durant and Klay Thompson, respectively, despite them recovering from devastating injuries. Teams need two superstars to compete. Kawhi not joining the Lakers provides more balance, but the move does not open up the title as much as that false idea of historical parity suggests. If you need any reference, count the number of All-Stars amongst NBA champions as far back as you’d like to.

Some Folks Do Not Like Talented People Making Choices

The most interesting part about free agency is the perception of that agency. Sure, we know that means players can go anywhere they choose. But biases and fan allegiances and, in some cases, bitterness and jealousy can cloud some of our perspectives surrounding players’ decisions. Sure beneath some of the criticism and “hate” lies genuine concern that could be considered. For example, there is a chance Durant does not return close to his all-time great form. Or there is a possibility that signing Tobias Harris and Al Horford does not bode well for the Sixers’ chemistry. However, and this is especially true for the best of the best, there is this notion that those players shouldn’t choose the best situations for them to achieve success.

Basketball is a team sport. No matter how talented one or two players are, the situation surrounding them needs to be such that they can thrive, and that includes seeking the best teammates possible. Superstars never take a backseat to anyone. LeBron was the best player in Miami. Durant was the best player in Golden State. A player choosing to play with other great players should not produce the vitriol it does. But, that’s not the nature of people.

Let’s bring up the major haul the two L.A. teams gave up for their respective superstars. Multiple first-round picks in multiple years as well as young and talented players were traded in exchange for an All-NBA caliber player in the prime of his career. As much as it is important for franchises to place themselves in a position of longevity, there are also some teams who need to satiate the desire to compete for championships right away.

The colloquial definition of luck is, “when skill meets opportunity.” Basically, something one can control within an environment one cannot control that has both controllable and uncontrollable factors produces luck, good or bad. For example, a lucky shot like Kawhi’s winner against Philly was lucky because of the bounces. He could not control that, but he did control getting the shot off and shooting from a distance that he has made shots from thousands of times over, skill and opportunity.

I bring luck up because the Clippers saw an opportunity to both get Leonard and George and pursued it. First round picks are valuable, but they’re not as valuable to a team with two All-NBA offensive and defensive players 30 years old and younger. Stockpiling picks like a certain GM did in Boston can lead to that team being mediocre because they held onto maybes. Sometimes, letting go of good things is the sacrifice needed in order to obtain great things.

Jerry West is A Legendary Deal-Maker

It is possible that Jerry West’s legacy as a basketball exec is at least on par with his playing career, and he is still the man on the NBA’s logo. He’s orchestrated deals that brought Shaquille O’Neal and Kobe Bryant to the Lakers, Kevin Durant to Golden State and now this mega deal for the Clippers. That’s it. That’s all I have to say and that’s all that needs to be said.

Journalism is hard. Reporting requires levels of invasion and manipulation without giving up the methods used to gain information, all in the name of “the big scoop.” It seemed hopeless for the Clippers up to the hour the news broke, with Kawhi’s return to Toronto or destination to the Lakers being his only two options.

Reporters and analysts were so sure of where their sources, only for him to not only surprise everyone with his decision, but his ability to persuade the Clippers to trade for George. Sources will always exist and they’re always needed. But those sources better step up their games and be more accurate with their intel.

This past week is why it’s for the best that the NBA has drama year-round. May every offseason be this dramatic from here on.

by Johnathan Tillman time to read: 3 min
Football Tiers of Hope: What Are Your NFL Team’s Hope… 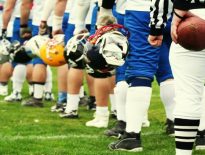