The 2018-19 NBA season is at its home stretch. The Association still believes that its destination will be another championship for the Golden State Warriors. But that doesn’t mean we can’t enjoy the season as a whole. Last year was wonderful, so let’s return to the path. Let’s go back to the Journey.

Song of the Week: Mick Jenkins feat. Michael Anthony – “F****d Up Outro” (Obviously Not Safe For Work, Given The Asterisks)

Every scene needs a setting. Every setting needs a background. And every background needs animate and inanimate objects to bring it to life. Even in a movie like “I Am Legend,” Will Smith’s character had a dog companion and even encountered a mom and daughter who also managed to survive the horrendous outbreak that destroyed the city. Interaction allows us to see characters in their environments doing things alongside their main purpose.

Video games have all sorts of people and things that controllable characters talk to and interact with over the course of the game. Some, like Navi in The Legend of Zelda: Ocarina of Time, are around throughout. Others are only encountered in a specific area of the game. These are called, “Non-Playable Characters” or NPCs.

As stated earlier, NPCs exist to add detail to the story of the game and to break up the monotony of the main purpose of the game. Some provide items if they’re helped. Some are there to provide information. And some are just honestly there to antagonize and annoy players. The best example of the last type is the dog in Duck Hunt. He applauds when you connect on shooting a duck—and giggles when you miss.

If you’ve played video games with NPCs, you’ve tried to no avail to attack the ones that are annoying. The result is the same: they remain there, unharmed, as attacks have no effect. They just continue with whatever action or dialogue they were designed to have and players are left with continuing their tasks. As much as players want them to suffer and take out frustrations, NPCs are unscathed.

Fan interaction at NBA games is mostly benign. Cheering and booing are the typical sounds made, depending on what’s happening on the court. Occasionally, especially negatively, fans’ behavior turns profane and unacceptable. Whether it’s because of some misplaced belief they can do whatever they like at games because they paid to be there or other unethical reasons, those fans cross the line. They do so knowing this:

There will be a penalty if the players hit them.

Fans are untouchable. In any other setting, the things fans have said and done that caused players to react unfavorably to them would result in a confrontation—unfortunately, sometimes the confrontation is physical.

Russell Westbrook has had multiple bad interactions with fans, particularly in Utah when his Oklahoma City Thunder play the Jazz. Last week, a fan said some obscene things, and Westbrook responded in a way most would if it were not an NBA game. While he was fined $25,000 (in part, I think, because he appeared or at least appeared to threaten the man’s wife also), the fan was permanently banned from Jazz games.

I’m not saying Russell Westbrook was totally right in how he responded. I do believe he was fed up with having to hold back his emotion and allow patrons to say vile things to him while he plays. Just because he is wealthy and a celebrity does not give fans license to say whatever they want to him. Fighting words are not a requirement of fandom. And to paraphrase one of my favorite tweets ever courtesy of @MacAndCheeks, “If you don’t wanna fight, stop doing wanna fight [stuff].”

As much as players have to restrain themselves and not treat fan altercations like the setting is on a street, fans should also be held accountable for their behavior. Your ticket isn’t a voucher for attendees to treat players horribly. Disrespect is never okay, and players shouldn’t be expected to continuously brush off extreme cases of it just because they’re professional athletes. Maybe us as a society should examine fan decorum and make changes wherever necessary.

Twenty-two weeks in, and we’re still on the Journey. Happy NBA, folks.

Back to the NBA Journey, Week Twenty-Two: Non-Playable Characters 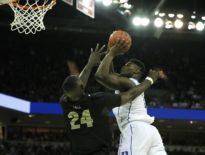 Basketball The Top 5 Plays From The Men’s NCAA Tourname… 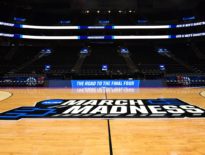