The 2018-19 NBA season is close to the home stretch. The Association still believes that its destination will be another championship for the Golden State Warriors. But that doesn’t mean we can’t enjoy the season as a whole. Last year was wonderful, so let’s return to the path. Let’s go back to the Journey.

Song of the Week: Queen – “Another One Bites The Dust”

It’s no secret, health is important. One of the main reasons it is important is due to the fact that health can deplete and eventually run out. We have systems in place such as eating, rest and exercise to improve and maintain our health. We also have warnings in our bodies to alert us when something is wrong with our health. Whether it be a cough, a headache or extreme things like organ failure, our bodies constantly remind us of the state of our health.

Health is a key component to many genres of video games. From health bars in fighting games like The King of Fighters and first-person shooting games like Doom to heart pieces in The Legend of Zelda series, a finite maximum of health adds an element of responsibility for players to manage. One must be constantly aware of the state of their health, and take artist action and caution should that health get too low in order to avoid “game over.”

In addition to this, games also include something called, “The Magic Pixel.” This is a final sliver of life after taking damage that’s built into some games, allowing for one more opportunity before game over. Essentially, it means that in some instances, moments where an attack that normally does enough damage to kill, leaves the tiniest bit of health. It’s similar to a vehicle’s gas light coming on, but having a couple miles actually left in the tank.

Accompanying times of low health is some sort of warning. A blinking light or sounds act as the previous bodily signals mentioned to remind the player to either replenish health or — if necessary — to heighten one’s concentration in order to achieve victory. Recklessness is not allowed when there is so little life left. For a wonderful example, watch this video of a match of BlazBlue: Chrono Phantasma:

Player 1 depletes Player 2’s health to its last bit. Then, Player 2 mounts a seemingly impossible-looking comeback while not taking anymore damage in the process. This demonstrates the ability of Player 2 to maximize their opportunity to attack while simultaneously avoiding being too aggressive and suffering a fatal blow. This reminds me of a certain team that is running out of opportunities to lose if they want to make the playoffs…

The Los Angeles Lakers, led by LeBron James, currently sit in 11th place in the Western Conference. With less than a third of the season remaining, their playoff chances dwindle with each disappointing loss. There is no time to replenish health with more games or to trade for different players, so it is up to the team to come together — “concentrate harder,” whatever that means — if they’re going to claim one of the eight postseason spots. Otherwise, for the first time in nearly fifteen years, LeBron’s season will end after the 82nd regular season game. He says he’s “activated,” and I hope the rest of the team follows suit to make this playoff push.

Nineteen weeks in, and the Journey continues. Happy NBA, folks.

Back to the NBA Journey, Week Nineteen: The Magic Pixel

by Johnathan Tillman time to read: 2 min
Basketball In The Rotation: “NCAA” by 2 Chainz 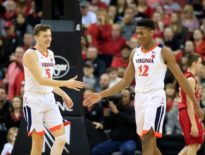