The 2020 NBA All-Star Game is imminently ahead and it could not have had better timing. With the game healing from the loss of Kobe Bryant, a refresh via world class exhibition basketball is intensely needed. The city of Chicago will host the game, but before the festivities can kick off, sides have to be picked, via the third annual NBA All-Star Game Draft.

Once again, mainly because we did such an excellent job last year, TSFJ is proud to bring you our pre-remix of the NBA All-Star draft. Johnathan Tillman and Matt Whitener will play the roles of LeBron James and Giannis Antetokounmpo as team captains and make their selections for the NBA All-Star teams.

Granted, this is not recap of what actually happened. Rather, it is just their outlook on what they would have done if the Infinity Gauntlet of NBA All-Stars rosters were bestowed upon them and Cherry Sportsbook laid out odds on who would win. The real rules of the draft will be followed: alternating between starters, with Team LeBron (whom Till will be playing the part of) taking the first pick, due to The Kang being the top vote getter on the year. Then Team Freak (which falls to Whitener) will kick off the bench picks, which also go in a back-and-forth fashion. Finally, a unique wrinkle is added in where each will select a ‘Snub Pick’, made of players that missed the cut for the actual game.

Got all that? Good. Let’s get things going.

Whitener: I believe I went with the King last year, so I’ll defer to playing the part of Giannis this year. Brother Till, please take the podium.

Till: Team Kang makes his Lakers teammate his All-Star one as well, with Davis as the first pick. I think people are finally grasping just how good he is this year (26.4 ppg, 9.1 rebounds and 2.4 blocks), now that he’s in a legitimate spotlight. Plus, I have the first of many lob options secured.

Whitener: Team Freak is putting together the most diabolical international duo of all-time by bringing aboard the Serbian prodigy for his All-Star debut. The shear potential creativity of these two together is what All-Star dreams are made out of. Plus, you already know Luka is going to be out to put on a show, as he is one of the most fearless competitors the league has been blessed with in decades. He’ll use tonight to put a stamp on his breakout accent.

Till: That’s a good pick. Luka is probably going to be captain here himself much sooner than later.

But with the third pick, I’m looking at the guy he was traded for last year. I now there are people that are arguing he shouldn’t have been a starter. But he will add the Steph Curry enemy element to the game – shooting from distance (averaging 9.3 threes attempted) and nutmeg-ing people. I prefer my All-Star Weekend to be centered around fun.

Whitener: Whoa, that’s a legit stunner, especially considering some of the guys that are still on the board.

But you know what? I like fun too, so I’m going to take a Fun Guy. Sure, nobody is at the All-Star Game for defense, but I like to see some crazy, fantasy pairings on the court in my All-Star viewing experience. The idea of watching Leonard and Giannis form a virtual Voltron of arms across the front court is too enticing to pass up on, so give me two generational level defenders – who aren’t afraid to take the big shot either.

Till: While I immensely enjoy Kawhi, I feel like the guy leading the Association in buckets is getting overlooked. So let me get James Harden here. He’s walking in averaging over 35 a night, plus provides a third playmaker will allow for more guys to run and finish with lobs as well.

Whitener: It feels like the perfect time to add another man without fear to the squad. On that note, I’m calling up Kemba Walker, who has been the missing piece of the party in Boston so far. He’s a fearless shooter that knows how to both step back and blend in, but also can also become an instant microwave as well. Both are valuable assets in the ebbs and flows of a star studded contest like this.

Till: So that leaves, among the starters, Pascal Siakam and Joel Embiid – and I’m going to take Siakam. The defending Most Improved Player has continued to raise his game and adds even more versatility to the lineup (23.7 ppg, 7.7 boards, 3.5 assists and a steal per night).

Whitener: Well there goes my vision of a championship Raptors one night revival, featuring Kawhi on the bass and Pascal on the drums. So instead I’m all good with inheriting the arguably the most talented (and tumultuous) big man in the game, via Embiid. He may have gone first for sentimental reasons in the real-life draft, but this feels a bit more on point, based on immediate returns on Thursday night.

And now for the Reserves….

Whitener: There’s no doubt about this one, as he’ll likely be getting a starter’s load of minutes wherever he lands. Nobody is lighting it up like Dame Dolla headed into ASG Weekend. He’s averaging 34.3 a night since the calendar flipped to 2020 and has topped 45 points five times in the last three weeks. He’s on a soul-taking spree that could run straight through his All-Star competition as well.

The most exciting player left is Westbrook, so I’ll take him. He’s been a model of consistency over the past decade, something that most others cannot say. Plus he’s was born for this type of game.

Whitener: I love the Westbrook pick because it keeps two of his biggest rivals on the opposite of the court in Lillard and Embiid, and I think a bit of real-life drama helps to add some seasoning the All-Star Exhibition.

In regards to level of excitement, Jimmy Buckets isn’t the most exhilarating player in the world, but he is one of the most effective. He can defend any and all of the variety of wings pitted against him, while being able to fill it up himself. Plus, he could be extra incentivized to fill it up in front of his old hometown fans. And a motivated Jimmy is a damn fun one to watch.

Till: First year All-Stars tend to struggle, which could be expected based on how young Ingram is. But honestly, I’m limiting the number of seven footers on my team. And there is one that I am determined not to pick, so I’m going with the upside and pure talent of Ingram for the time being.

Whitener: This is one of my picks that is admittedly based in reality. Giannis loves his teammates, he’s made that much clear. He picked up Middleton first last year and was upset that Eric Bledsoe got left home this year, so he won’t leave his road dog out for long and I’m inclined to play towards reality for the moment.

Till: There will be very little defense played, especially considering all of the scoreboard resets and reboots that are built into this game. So, if the Association isn’t going to take the intricacies of the game seriously, neither will I. I’m going to continue with the youth movement and take Jayson Tatum. He’s shot more threes this year and his game is tailored well to All-Star affairs.

Whitener: As a St. Louis native, I’m taking that one personally, with J-Tat being the only STL kid on the board following the jobbing of Bradley Beal. However, I’ll rebound nicely and go with Ben Simmons here instead. His game was tailor-made for All-Star play and he’ll make everyone around him better.

Till: Simmons and Embiid on the same team is currently the blueprint for underachieving, so good luck with that.

But speaking of versatile guys, give me yet another first-time All-Star in Bam Adebayo. While Jimmy Butler’s toughness has propelled the Heat to near the top of the East, Adebayo’s development has been just as important. He could be the runaway pick for Most Improved Player this year (15.9 points, 10.4 boards, five assists).

Whitener: Sticking with the theme here, I’m going to keep the international flavor brewing. Jokic is one of the most unique creators the league has seen in a long time. The idea of him, Luka, Simmons and Giannis coming together is enough to make the ghost of David Stern smile ear-to-ear in international expansion bliss.

Till: Your team just got exponentially slower, but that’s a good pick. I’m going to take the other exponentially skilled big man left in Sabonis. It’s still up in the air if he can be as good as his father, but he’s having an incredible season for the Pacers.

Whitener: Calling back to your earlier comment about a lack of excitement from the bench options, I’m taking a guy that goes completely against that. Mitchell has been waiting to get to this stage for years now and I have no doubt that he’ll make the most of every second of time he gets. He’s got elite-level explosiveness and highlight of the night potential.

Till: People overlook that Mitchell won the dunk contest just three years ago. My next pick is Kyle Lowry, because I related to him more than any other NBA player. So its like having an extension of myself out there.

Whitener: I’m giving props to Gobert for being pissed about missing the game last year and then coming back and getting even better to make it over the hump. While defense is his main calling card, he’s also a skilled lob catcher and could be a lock down presence around the rim next to Giannis and Kawhi if the situation calls for it.

Till: Thank you for taking Gobert. He was the one player I did *not* want. He’s giving me 2004 Jamaal Magloire vibes in this setting. Alright, great. Whew.

That leaves me with Chris Paul, who’s resurgence in Oklahoma City has that team playing way better than expected. I guess can overlook him being a tattletale for one exhibition game.

Till: So this is actually the toughest decision I have had to make so far. I’m sure we agree that both Booker and Bradley Beal are the two biggest snubs here. So, I’m going to stick with the theme of taking the first-time player and go with Booker. He’s incredibly good and having a historically significant year for an All-Star left out. Plus, he’s only a year older than Brandon Ingram.

Whitener: I am happy to be able to rectify the sheer disrespect that was given to Beal. With all due respect to Booker, Andre Drummond, Eric Bledsoe and Derrick Rose (whose All-Star homecoming reception will be deferred to Saturday’s Skills Competition instead), Beal not being selected is high treason. He’s fourth in the league at 29.2 points per game and is simply being punished for WHERE he plays, as opposed to how he has performed. 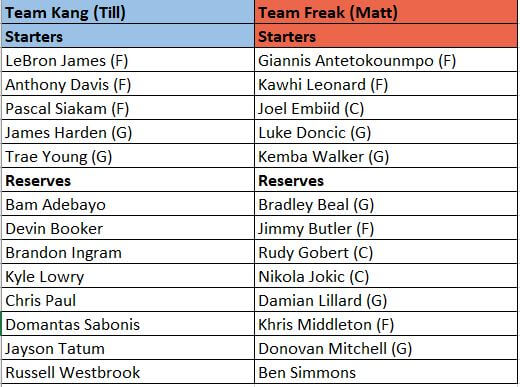 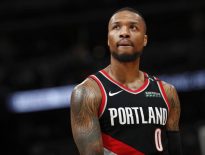 Basketball Return to the NBA Journey, Week Fifteen: In His Na… 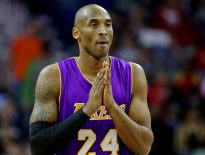